Dit the Inspector General's report on the investigation by the FBI of the case surrounding Hillary Clinton's use of a private email server reveal that she ran a child sex ring? No, that's not true. The site making this claim has a history of taking some real news and then adding invented facts to their first paragraph and headline that are not supported by the rest of the article. The site does this to profit off unsuspecting people who see the story on social media and then click through netting them quite some advertising revenue in the process.

The Inspector General's report has confirmed that Hillary Clinton helped run a D.C child sex ring during her time as Secretary of State.

Buried on page 294 of the 500-page report were notes from FBI Agent Coleman, who discovered evidence of "crimes against children" by Hillary Clinton and her Foundation.

The FBI investigator claims he debriefed former director James Comey on the evidence after being notified of crimes from the FBI's Criminal Investigative Division. 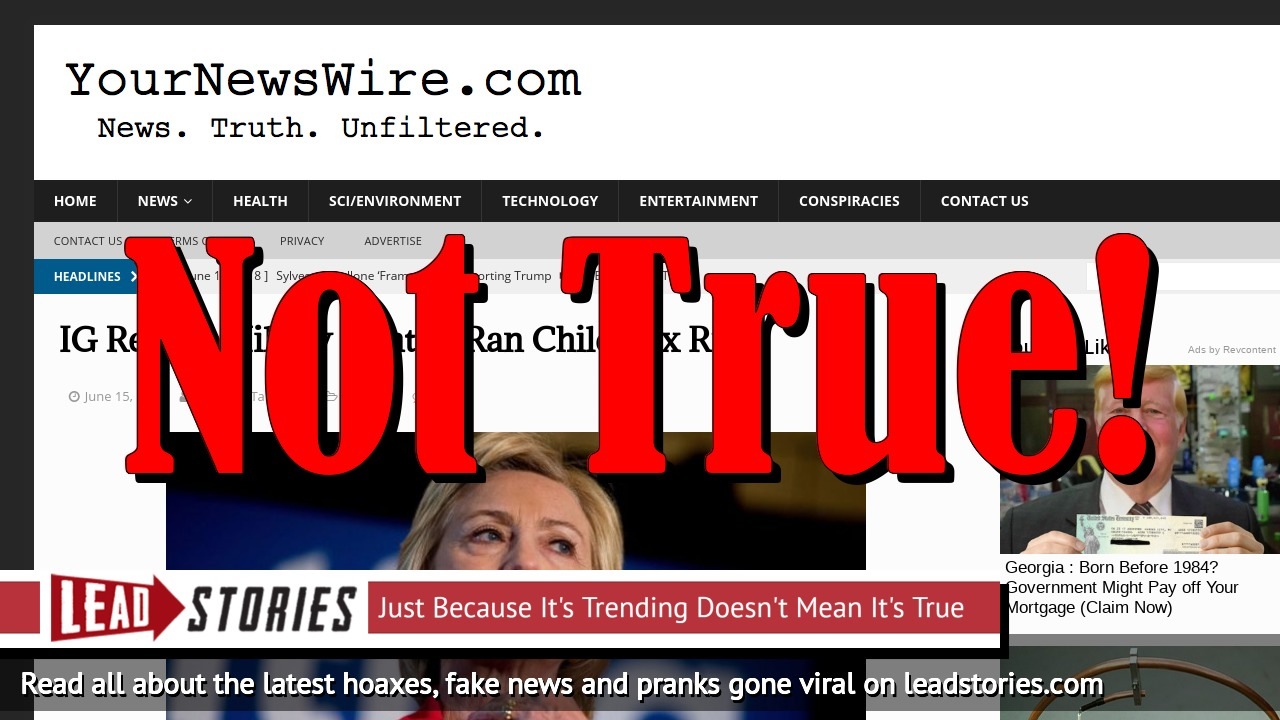 The article bases the claim against Clinton on a single journal entry describing the topics of an FBI morning briefing:

Coleman told us that he kept regularly took notes in a journal. Coleman's notes from October 4 contained the following entry:

It is quite clear that "Hillary Clinton & Foundation" and "Crimes Against Children" are two different topic headers here, on different lines. It doesn't even mention what the crimes are or if they amount to a 'child sex ring'.

Later on in the report there is another mention of "crimes related to the sexual exploitation of children" but it is only in the context of guidance of what to look for on Anthony Weiner's laptop (and what not to look for, i.e. emails and communication between Weiner and Abedin)

The AUSAs provided written guidance to the case agent about how to handle review of the laptop. In a September 28 email to the case agent and the SSA, AUSA 1 advised that the case agent should review "only evidence of crimes related to the sexual exploitation of children, enticement, and obscenity" and instructed the case agent "that all emails and other communications between Anthony Weiner and Huma Abedin (even if there are other parties to the communication) should be sequestered and not reviewed at this time." The case agent agreed and responded that the "[O]nly emails I will review are those to/from Weiner accounts to which [Huma Abedin] is not party."

It does not specify if evidence for crimes related to the sexual exploitation of children was actually found and certainly doesn't mention a Hillary Clinton child sex ring.

Such a strong claim requires strong evidence. Some vague references to crimes against children without spelling out who, what, where and when? Any competent and fair judge would toss out a case based on such flimsy grounds right away. Yet people still like and share this "news" on social media, probably because they like to believe it is true. Still, if this is the quality of their "evidence", good luck finding a judge that will hear the case.

We wrote about yournewswire.com before, here are our most recent articles that mention the site: