Did Alex Jones go on a rant about "never defeating the human spirit" in reaction to Facebook and Youtube banning him? No, that's not actually true: the rant video that has been circulating on social media is at least two years old so it can't have been made in response to yesterday's bans.

An example of the video can be seen in this tweet published by Twitter user @classiclib3ral on August 6, 2018 (archived here, video archived here) which was captioned:

In the video, Jones can be heard shouting:

We were unable to determine exactly in which context Jones posted this video (since YouTube deleted his channel it is now impossible to use it for research). But we found the video published on the YouTube channel of a user named Cheesyc on November 14, 2016 (archived here).

A longer clip showing the context of the rant was posted on October 13, 2016 by Youtube user "drew p. weiner" (archived here, video archived here). In it, Jones can be seen ranting and raving against "Global elites" and Hillary Clinton. The shorter video clip circulating today is an edit that cuts out the middle part and opening of this monologue.

If the video was indeed from that period it would correspond with a big dip in Donald Trump's election polling after several allegations were made against him by women claiming he had assaulted him.

23 October Surprises of the 2016 Election

In years past, presidential campaigns typically only had to worry about a single so-called "October surprise" with enough firepower to potentially knock them off the the path to 270 electoral votes - George W. Bush's secret DUI arrest and Mitt Romney's "47 percent" video, for instance. 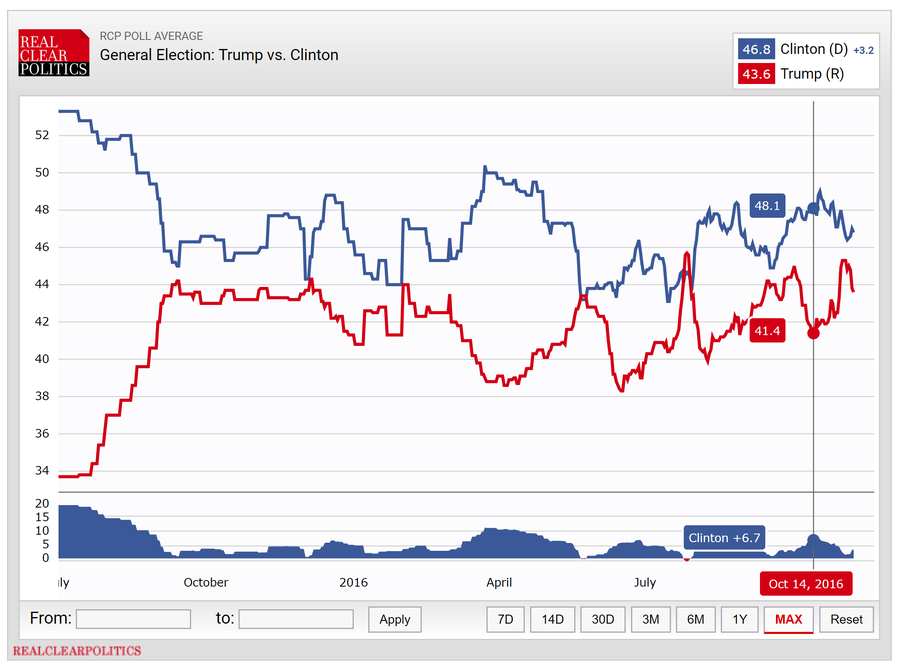 19 quotes from Samuel Adams: 'If ye love wealth better than liberty, the tranquility of servitude better than the animating contest of freedom, go home from us in peace. We ask not your counsels or arms. Crouch down and lick the hands which feed you.