Regular readers of this site are doubtlessly familiar with notorious fake news website YourNewsWire.com. Over the years we have debunked countless stories from it, and we are not the only fact checking website that regularily took aim at hoaxes spread by the site. But now it looks like the site has had its reach fatally reduced by Facebook around the same time when Alex Jones' InfoWars page was removed from Facebook (and possibly starting even earlier).

The pattern used by the writers of the most popular YourNewsWire articles is almost always to copy paste large parts of articles from other websites, mostly about controversial issues such as immigration, pedophiles, vaccination, conspiracy theories or U.S. politics. They would then add an introductory paragraph (or two) along with a headline with one or more invented "facts" to spice things up enough to ensure viral succes. For example if some public figure said something "could" or "might" happen YourNewsWire would happily report it had been "Confirmed!" or that it "would" happen. Often articles would cite anonymous "reports" without bothering to clarify where they came from or how it was verified they were real.

Usually the site could be relied on to publish a viral hoax story every few days or so on average. So when we noticed it had already been 18 days since the last time something from the site went viral enough for us to bother checking it we naturally wondered what was up.

We had a look at the number of engagements and posts published by the site as tracked by BuzzSumo: 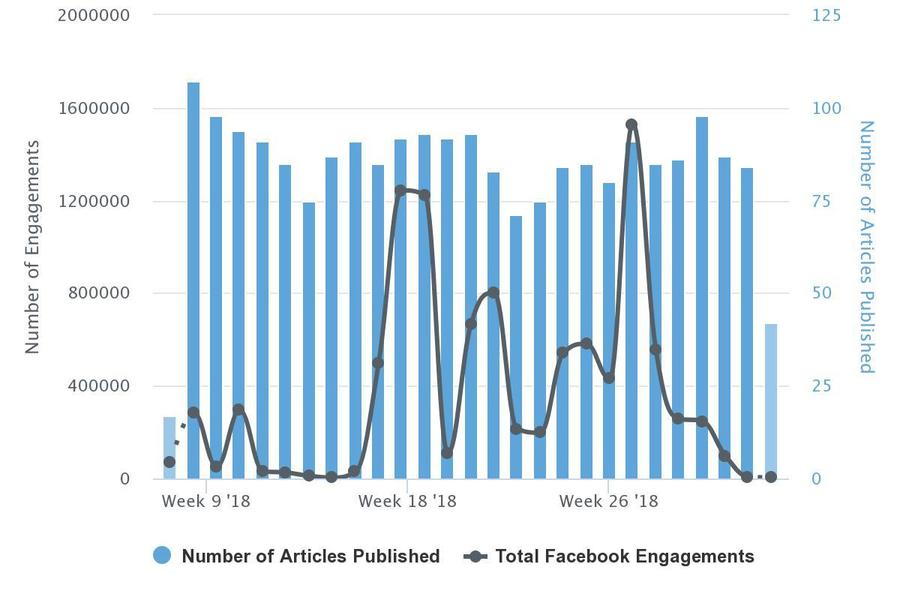 There is a pronounced drop in engagements starting early in August. More detailed analysis showed it started on or around August 8, two days after Facebook announced the banning of InfoWars and Alex Jones from the platform. Since then the site has not had any major viral hits, with stories struggling to get to a thousand likes at most. Before that they regularily had stories with tens (or hundreds) of thousands engagements.

We also used Facebook's CrowdTangle tool to look at the performance of Facebook page "The People's Voice" which is promoted on the site as its official Facebook page. Specifically, we looked at the interaction rate: how many people who saw a post liked/shared/commented on it? 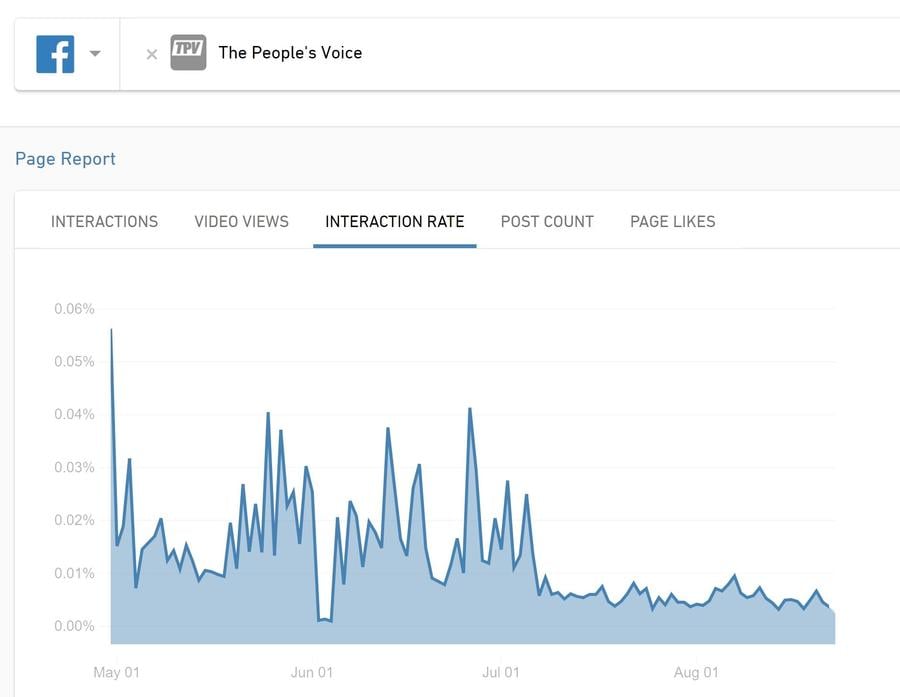 This graph shows a pronounced drop since July 7, 2018, a good month before the drop began on the BuzzSumo graph. We are unsure what explains the difference but one thing is clear: YourNewsWire's articles definitely aren't spreading as fast and far as they used to on Facebook.

This is consistent with what Facebook said in the news release about banning Alex Jones when they said they don't remove fake news pages but throttle them:

How do you distinguish between fake news and content that breaks your Community Standards?
People can say things on Facebook that are wrong or untrue, but we work to limit the distribution of inaccurate information. We partner with third-party fact checkers to review and rate the accuracy of articles on Facebook. When something is rated as false, those stories are ranked significantly lower in News Feed, cutting future views by more than 80%.

The owners of the site seem to have noticed because they started a crowdfunding campaign explicitly mentioning being "silenced on social media". Following message now appears at the end of all their articles since at least August 16, 2018 (we checked archived articles on archive.is and this was the oldest example we could find with the message, with no appearances in the days before).

We contacted YourNewsWire to ask about the demonetization and their loss of reach but we did not hear back from them at the time of publication.