Readers of this site are probably aware that some of the content found on Macedonian fake news websites is often copied directly from the satirical sites and Facebook pages of Christopher Blair and his friends. On those sites and pages they write over the top fake stories specifically designed to get less intellectually gifted Trump supporters and conservatives excited enough to share them without noticing the many obvious hints and satire disclaimers indicating they are complete works of fiction. Fans of the sites and pages would the use the comment options on social media to mock the people who fell for them.

Critics have pointed out the stories sometimes started leading their own lives as they got copied by various "real" fake news websites on the internet, omitting the disclaimers and some of the hints. Blair was recently interviewed by the BBC World Service about his activities and the reporters also stopped by at my place to get some more background about him as I have been known to follow him for quite some time now. You can listen to that interview here. 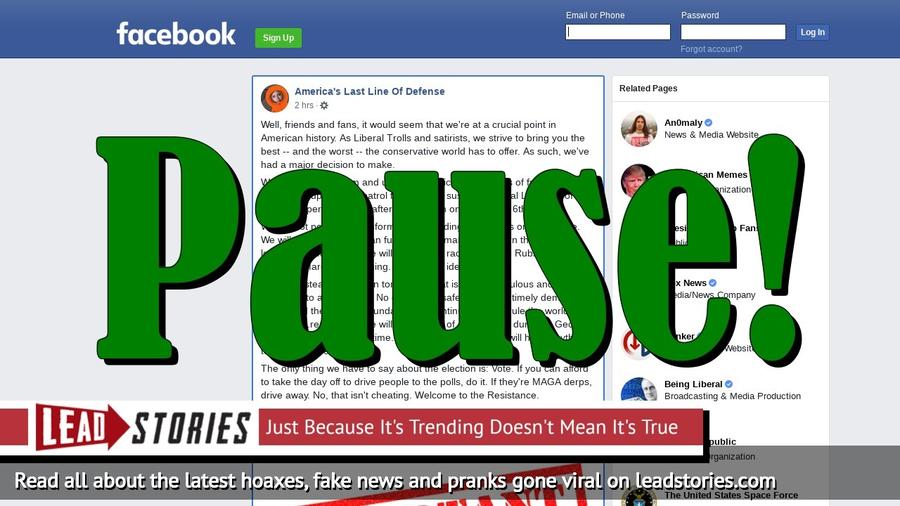 However today Blair annouced he and his crew would observe a moratorium on election related stories. Key part of the announcement:

We agreed, as a team and under the advice of hundreds of friends and trolls who support and patrol the page, to suspend normal Last Line of Defense operations until after the election on November 6th.

We will not post any misinformation regarding candidates on either side. We will not claim that a van full of illegals managed to turn the tides in a local race in Montana. We will not call the race for Marco Rubio at 3 PM. No, Little Marco isn't running. You get the idea.

You can read the full announcement below:

When we reached him for comment about this "truce" Blair said he didn't consider it one, seeing as

"There's nobody on the other side to sign off and make them stop being stupid."

He considered it to be more to be a temporary halt on election related stories while still continuing business as usual.