Did a school in Westcliff-on-Thames give a pupil the role of imam in a Christmas nativity play? No, that's not true: the story and accompanying note were made up by a British satire website, it is completely fake.

The story originated from an article published by "U OK Hun?" on November 24, 2018 titled " Parents angry after their son is chosen to play an IMAM in school Nativity" (archived here) which opened:

The parents of seven-year-old Christian Slater have been describing their anger after he was allegedly told by his school teacher that he would be playing an IMAM in this year's nativity play.

According to the headteacher of Roger Lloyd-Pack Memorial Primary Academy in Westcliff-on-Thames, this year's 'multicultural and accessible' festive production will be 'a celebration of tolerance and diversity in Britain.'

Of course there is no "Roger Lloyd-Pack Memorial Primary Academy": the fictional school was named ater the actor Roger Lloyd-Pack, famous for his role in hit British comedie series "Only Fools and Horses". It is supposedly located in "Westcliff-on-Thames" but that is a fictional town. It does sound very close to "Westcliff-on-Sea" which is part of Southend-on-Sea in the UK (this is relevant, see below). The name of the boy, Christian Slater, is of course also the name of an actor. The last name of the teacher, "Al-Zhafavah", has been used in many stories from the satirical Southend News Network.

The story was accompanied by a picture of a note that read: 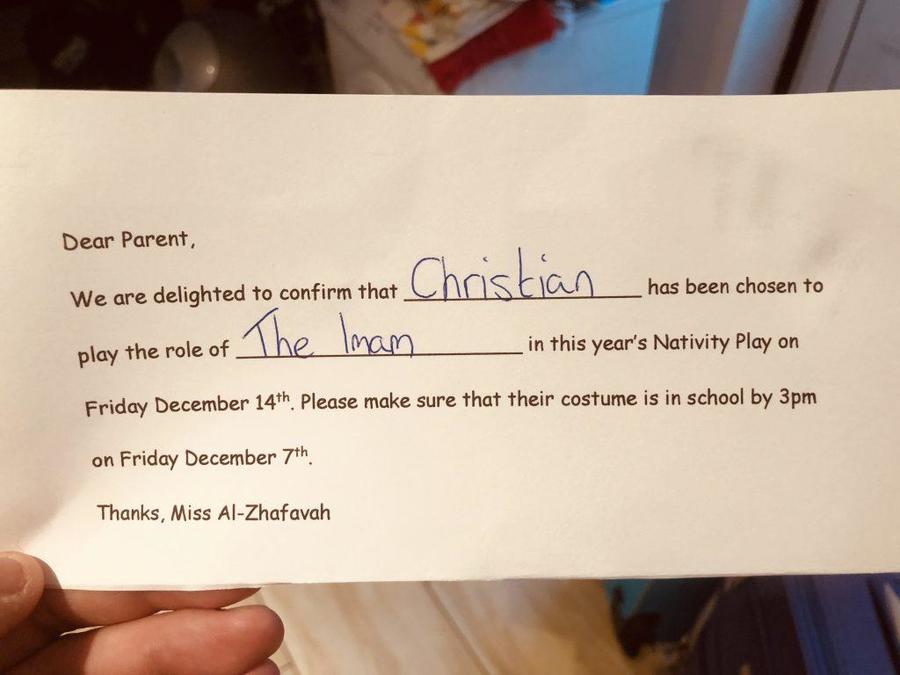 The fake note used in the story

The website "U OK Hun?" has an about page that reads:

The Southend News Network is a satirical site pretending to be a news organisation by the English coast in Southend. They have a disclaimer on their about page that reads (in part):

Several of their stories have been mistaken for real news in the past and the site was recognized by the local authorities as an "official news outlet".