Was the "EU Army" deployed to the streets of Paris to "crush" the "French Revolution" this weekend? No, that's not true: the claim came from a notoriously unreliable website that tries to make money by luring in people with explosive headlines that often misrepresent what actually happened in order to earn money with advertising. It is not true.

The story originated from an article published by NewsPunch on December 8, 2018 titled "EU Army Deployed To Paris To Crush French Revolution" (archived here) which opened:

The EU army has been deployed to the streets of Paris in an attempt to crush the historic French revolution currently sweeping across France. 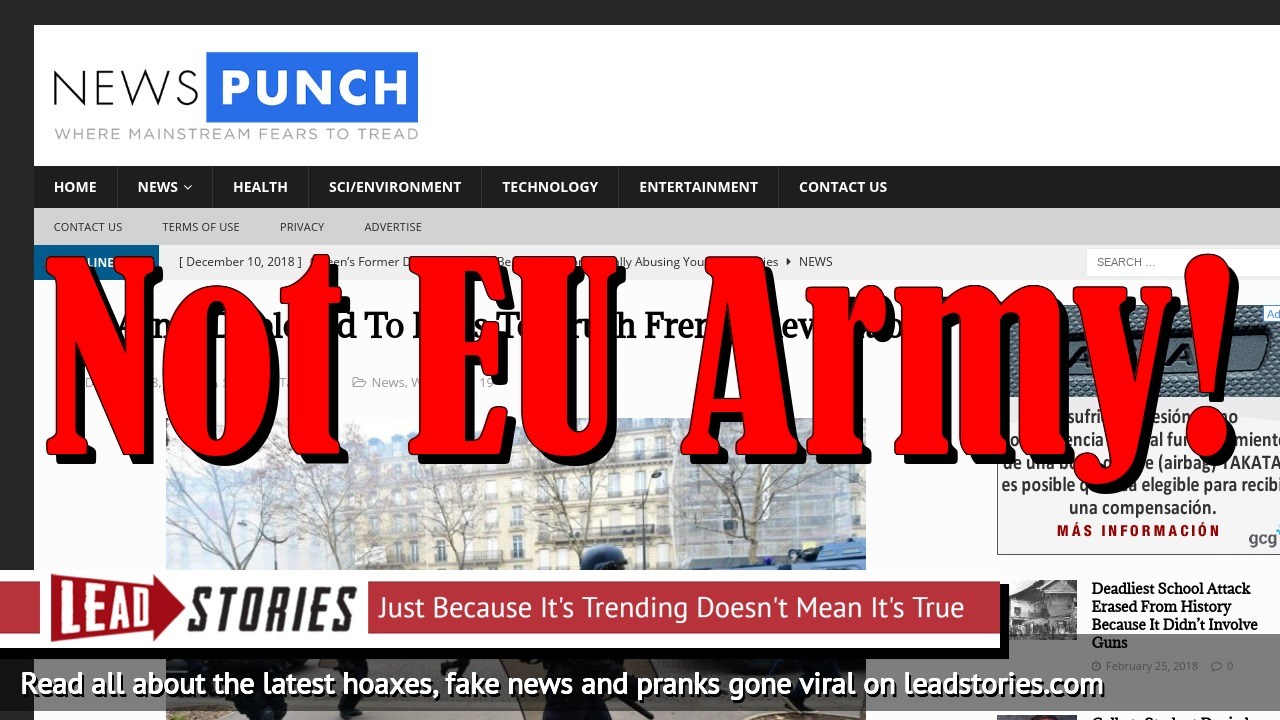 The EU army has been deployed to the streets of Paris in an attempt to crush the historic French revolution currently sweeping across France.

First of all, there is no such thing as an "EU Army". All European nations have their own militaries and while there is some common policy and collaboration there is no unified organisation with its own uniforms and command structure. There has been talk of establishing something like that but for now it is just that: talk.

Both Angela Merkel and Emmanuel Macron mentioned the idea of creating a real European army. This unprecedented convergence of French and German thoughts and words, which incurred the wrath of America, marks a turning point. EURACTIV France reports. The idea of establishing a European army is coming back.

The video in the tweets the NewsPunch article is based on actually show armored cars of the French Gendarmerie Nationale, which is a kind of national police force overseen by the interior ministry but technically part of the military. They are not part of any type of unit run or overseen by the EU.

NOTE #EUflags on these armored cars in #Paris against the #YellowJackets, a sign of the Future, Beware #Britain the #EU is building an Army against the People 1984 is Here! pic.twitter.com/XuuEelcQgf #StandUp4Brexit @DCBMEP @andreajenkyns #Brexit #Tory @ConHome #Labour @KateHoeyMP

So why is there a European flag on one of the vehicles visible in several tweeted pictures and videos? French fact checkers looked into it:

They concluded that the posts mostly depicted one vehicle which could be recognized by name "Hermès", the number "12" and the license plate "654 0293":

They also contacted the communications service of the Gendarmerie and according to them the flag had been added during a recent training excercise in the Dordogne region that was part of a European partnership.

NewsGuard, a company that uses trained journalist to rank the reliability of websites, describes newspunch.com as:

A news and conspiracy website that regularly publishes false information and far-right conspiracy theories. The site was formerly housed under the domain yournewswire.com.

We wrote about newspunch.com before, here are our most recent articles that mention the site: