Did the AARP -- the American Association of Retired People -- help elect Alexandria Ocasio-Cortez and other Democrats in the 2018 congressional mid-term elections? No, the AARP is a non-profit group banned by federal law from contributing to or taking part in federal elections in the United States.

The false claims are made in a series of sponsored Facebook ads paid for by The Chad Benson podcast in support of a membership campaign for AMAC -- the Association of Mature American Citizens -- which markets itself as the "conservative alternative" to the AARP. 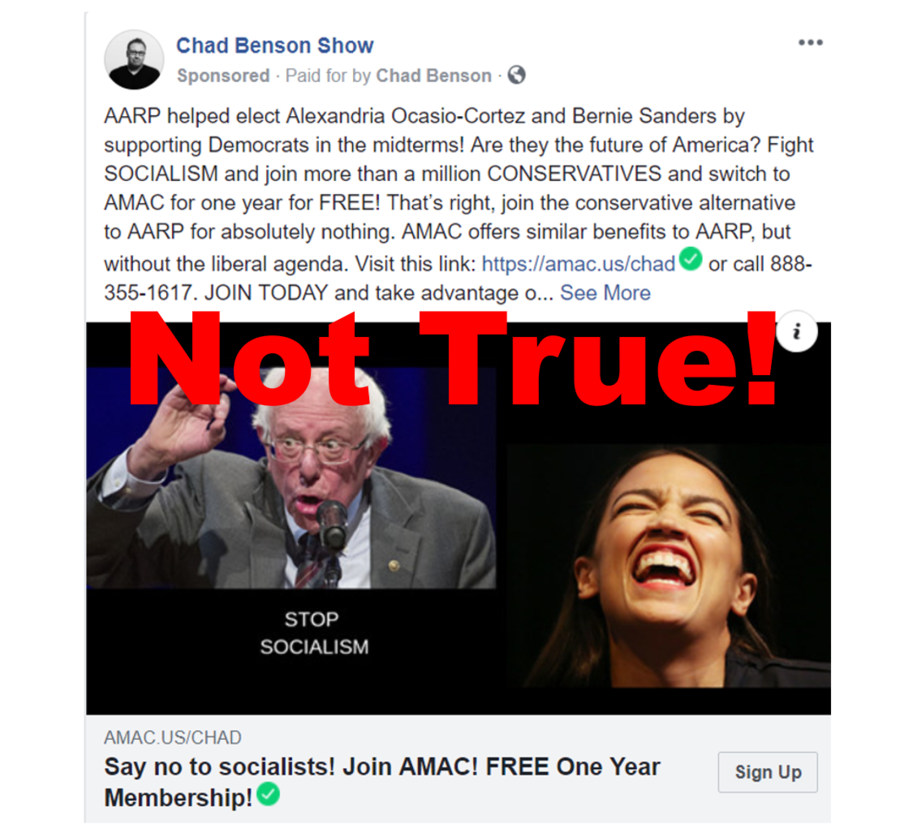 The ads make several claims, including that the AARP promoted a liberal agenda by donating thousands to flip the House of Representatives to Democrats, including financial support for Alexandria Ocasio-Cortez, a self-described socialist who unseated a powerful incumbent Democrat for New York's 14th congressional district seat.

"Several public databases confirm that AARP has never made donations or political contributions: the FEC database, Open Secrets, etc.," according to Kelly Quay of FleishmanHillard, the PR firm representing the AARP. "Lastly, for years we have surveyed our membership, who report to us that their political leanings are approximately a third conservative, a third liberal, and a third independent or in between. AARP is a nonprofit, nonpartisan organization that empowers people to choose how they live as they age."

The AARP is in good standing with the IRS, which monitors 501c4 tax-exempt groups to ensure they comply with the rules.

"To be tax-exempt as a social welfare organization described in Internal Revenue Code (IRC) section 501(c)(4), an organization must not be organized for profit and must be operated exclusively to promote social welfare... The promotion of social welfare does not include direct or indirect participation or intervention in political campaigns on behalf of or in opposition to any candidate for public office," according to the IRS website.

AARP does not have a PAC -- a Political Action Committee "to raise campaign contributions and influence the selection, nomination, election, appointment or defeat of candidates to federal, state or local public office," according to Quay.

The purpose of the anti-AARP ads appears to be to intice Facebook users to click on a link to AMAC, a group that markets itself as the "Conservative Alternative to the AARP." A review of the Facebook page for AMAC, suggests that unlike the AARP, the group appears to be involved in partisan politics by supporting conservative campaigns.

While AMAC says it is an "alternative" to AARP, there are significant legal differences. AARP is non-profit, while the AMAC entity that is seeking membership is for profit. The AMAC Foundation, which promotes certain political policies is a non-profit 501(c)(3) group, but AARP is a non-profit 501(c)(4) "social welfare" organization.

The Chad Benson Show, an Arizona-based entity, did not immediately respond to Lead Stories' inquiries.

AMAC and its founder Daniel C. Weber also did not immediately reply to Lead Stories' call and email requests for information.