Did Alexandria-Ocasio Cortez tweet out a press release demanding President Trump be blocked from stopping the return of a heroic Alabama mother from ISIS and did she claim this woman was "more of a hero than our veterans"? No, that's not true: the Twitter account that sent out the message has a parody disclaimer, it is not real.

PRESS RELEASE: We must block Trump from stopping the return of the heroic Alabama mother from ISIS. In many ways she is more of a hero then our veterans. Welcome home sister!

The tweet was screenshotted and widely shared on social media as real, for example in this post (archived here):

The screenshotted version of the tweet omits the "(parody)" part of the name of the Twitter account, which reads "Alexandria Ocasio-Cortez Press Release (parody)" in full. 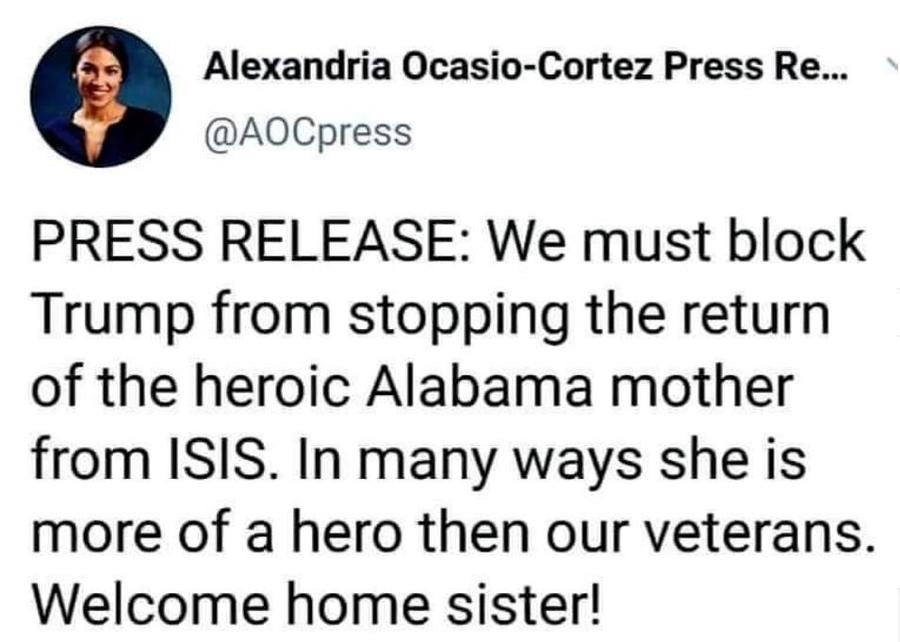 The bio of the @AOCPress accounts notes it is a satirical parody and points visitors to her real account at @AOC: 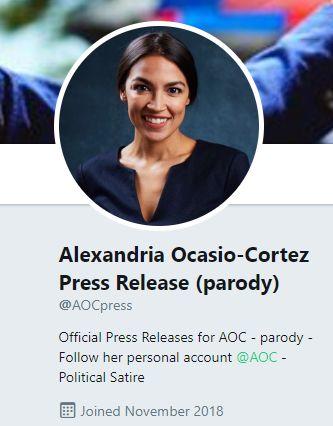 On her real account Ocasio-Cortez only mentioned ISIS twice so far:

Ask yourself why we panic over ISIS doing this, but not the far-right. https://t.co/5jdiFcs2SQ

Imagine if it was ISIS that sent bombs to US officials, started shooting in grocery stores, and invading places of worship.

How do you think this administration would respond?

& why is the response so different when those same terrorist acts are committed by white supremacists?

The parody tweet was likely sent to comment on the Hoda Muthana case, an American woman who joined ISIS and now wants to return home:

Exclusive: Muthana is the only American among 1,500 foreign women and children at a Syrian refugee camp

President Trump already expressed his feelings about that matter via Twitter:

I have instructed Secretary of State Mike Pompeo, and he fully agrees, not to allow Hoda Muthana back into the Country!