Did preacher Pat Robertson claim the Notre Dame cathedral fire of April 15, 2019 was the result of "Hell bubbling over with burnging homosexuals"? No, that's not true: the story was put out by a satirical website but was believed by many people online to be real.

The story originated from an article (archived here) published by the Brown Valley Observer where it was published on April 15, 2019 under the title "PAT ROBERTSON CLAIMS NOTRE DAME CATHEDRAL FIRE THE RESULT OF "HELL BUBBLING OVER WITH BURNING HOMOSEXUALS"". It opened:

Moments after reports came in that the famed Notre Dame Cathedral in Paris was burning, televangelist Pat Robertson took to the CBN airwaves to advance a theory to viewers that the fire that engulfed the legendary parish was a result of "Hellfire spilling over from all the gays burning in it's darkest recesses."

"It was bound to happen. This is all written in the Bible. We as a society just let everything be gay this and gay that," lamented the minister. "Soon enough, there's just too many homosexuals, and when all those surplus homosexuals started to die, Hell commenced with a burning so bright, so intense, there was bound to be some that would spill over to the Earth."

There is no evidence Robertson actually said any of this.

The Brown Valley Observer carries following disclaimer on its about page:

This is an entertainment website written to satirize news events, politics, and popular faces and ideas, and to provide commentary on social attitudes and trends.
While familiar names of celebrities and other media figures are used, all news stories contained within are fictional in nature. Most of the words and actions attributed to these figures are created entirely by the author, who has tiny, feminine hands, and who was once friendzoned by his own sister.
The purpose of this site is to entertain. Failing that, we'll settle for "annoy". We're not a particularly proud publication.
Please do not attempt anything described in any of these articles, except maybe a few of the sex ones, and even then, use goggles and proper safety-wear where applicable.
Similarities between events published here and any actual events involving pretty much anyone would really be a shame.

Despite this the story attracted thousands of comments on social media with many of them indicating readers took the story at face value. Here is just a small sample we found. 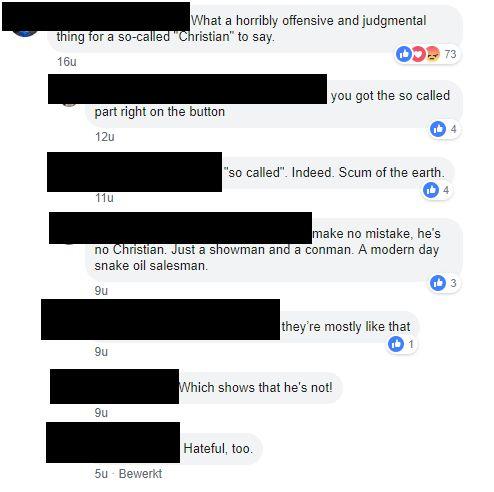