Is Kamala Harris not an American Black considering that her parents are Indian and Jamaican and was she lying when she said she was part of the second class to be integrated at her elementary school? No, neither is true: While racial definitions in the United States are controversial, the federal government's definition of "Black or African American" includes persons "having origins in any of the Black racial groups of Africa... and Afro-Caribbean entries, such as Haitian and Jamaican," according to the U.S. Census Bureau. The California senator falls into the legal definition of "American Black," despite attacks from political opponents who accuse the Democratic presidential contender of stealing the heritage of families with longer histories in the country. Also, the Berkeley school district confirmed her elementary school was segregated until a year before Harris started kindergarten, contrary to claims it was integrated six years earlier.

Questions of Sen. Harris's racial identity have followed her throughout her political career, but they grew louder in the wake of her strong performance in her first presidential debate appearance in which chided former Vice President Joe Biden's record on forced school busing in the 1970s. President Trump's eldest son retweeted a tweet (archived here) posted on June 27, 2019 that read:

Kamala Harris is *not* an American Black. She is half Indian and half Jamaican.

I'm so sick of people robbing American Blacks (like myself) of our history. It's disgusting. Now using it for debate time at #DemDebate2?

These are my people not her people.

Kamala Harris is *not* an American Black. She is half Indian and half Jamaican.

I'm so sick of people robbing American Blacks (like myself) of our history. It's disgusting. Now using it for debate time at #DemDebate2?

These are my people not her people.

Donald J. Trump Jr., the oldest of President Trump's children, retweeted it with the added message "Is this true? Wow." This helped propel Ali Alexander's tweet into viral status and also assured major media attention to the controversy. Trump Jr. deleted his retweet, but here is a screenshot: 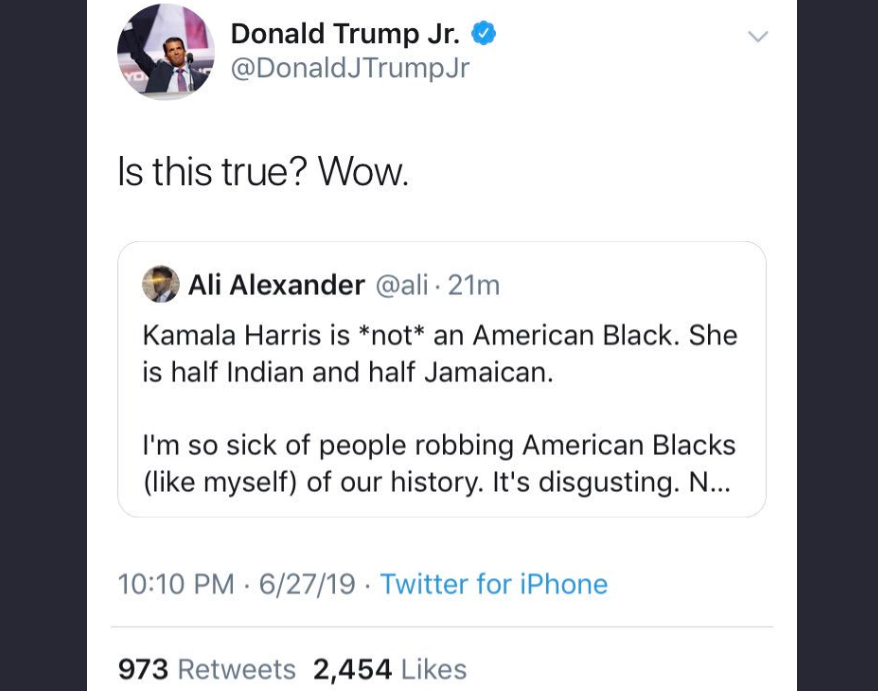 Alexander, who the New York Times described as "a right-wing personality," defined himself as "half-Arab, half-American Black" in a follow-up video titled "MY TWEET WENT VIRAL: Explaining why Kamala Harris is not American Black."

MY TWEET WENT VIRAL: Explaining why Kamala Harris is not "American Black" ✊🏾 https://t.co/aq681iJqll

"Kamala Harris's family didn't suffer American segregation," Alexander said, saying she "spent most of her formative years in Canada in an Indian household."
"I'm calling her out because she stole debate time claiming that her family suffered Jim Crow and civil rights discrimination in America, when that's not the case," Alexander said in his video.
Harris did not specifically claim "Jim Crow" suffering by her ancestors, but she did make a personal claim of discrimination as a child.
"As the only black person on this stage, I would like to speak on the issue of race," Harris said in what many saw as her break-out moment in the debate. She then recalled a story about neighbors who wouldn't let their children play with Harris and her sister "because we were black." She then questioned Biden's record on race, specifically his cooperation with southern senators to "oppose busing" in the 1970s. "There was a little girl in California who was part of the second class to integrate her public school, and she was bused to school every day. That little girl was me."
Watch this debate moment below:
Harris was born in Oakland, California, in 1964. She lived with her mother, a cancer researcher born in India, after her Jamaican-born father, a university professor, moved out following a divorce when Kamala was seven. Her mother moved her to Montreal, Canada, during her high school years, but she then returned to the United States where she attended Howard University, a historically black college.
"Kamala Harris's father's family owned slaves," Alexander said, suggesting this disqualified her from claiming to be a Black American.
Yes, her father did write in an article titled "Reflections of a Jamaican Father" that there was a white slave owner far up his family tree. Some rightwing blogs mislead readers to think it was her great-grandmother, while it was actually a more distance ancestor:

My roots go back, within my lifetime, to my paternal grandmother Miss Chrishy (née Christiana Brown, descendant of Hamilton Brown who is on record as plantation and slave owner and founder of Brown's Town) and to my maternal grandmother Miss Iris (née Iris Finegan, farmer and educator, from Aenon Town and Inverness, ancestry unknown to me). The Harris name comes from my paternal grandfather Joseph Alexander Harris, land-owner and agricultural 'produce' exporter (mostly pimento or all-spice), who died in 1939 one year after I was born and is buried in the church yard of the magnificent Anglican Church which Hamilton Brown built in Brown's Town (and where, as a child, I learned the catechism, was baptized and confirmed, and served as an acolyte).

Hamilton Brown was born in Ireland in 1776 and immigrated to Jamaica, where he became a prominent sugar planter and owner of slaves, according to one historical record. Brown died in 1843 at the age of 68, 46 years before Kamala Harris's paternal great-grandmother Christiana Brown (known as Miss Chrishy) was born and 121 years before Kamala's birth. This would make it likely that the slave owner Brown was at least seven generations removed from Kamala. 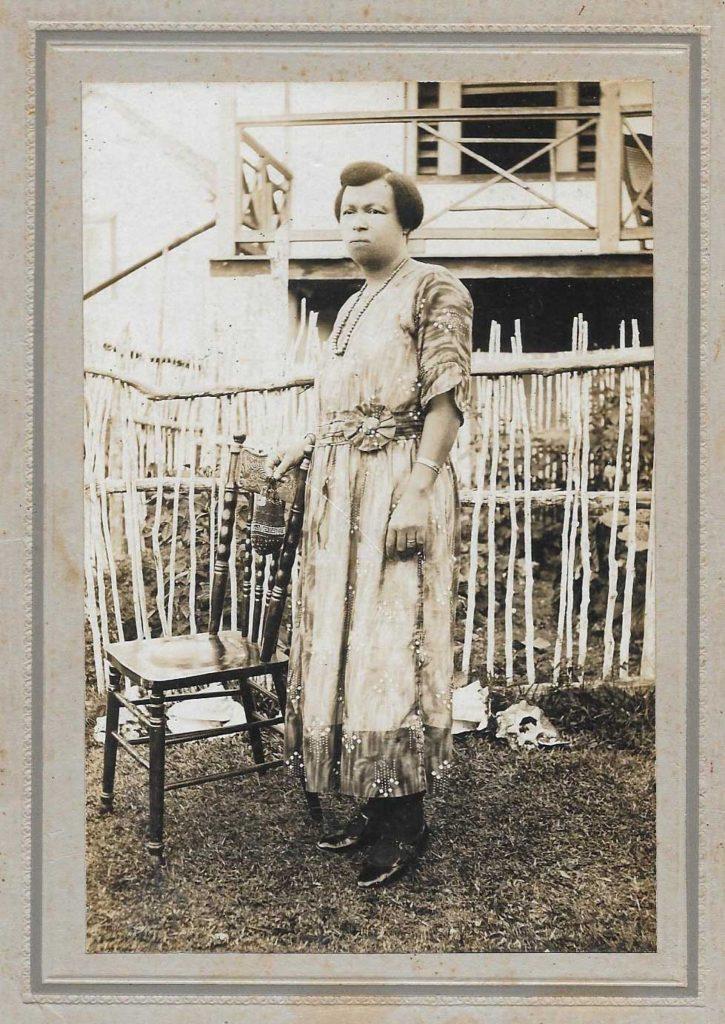 This is a photo of Kamala Harris's paternal great-grandmother Miss Chrishy, published in Donald Harris's article. 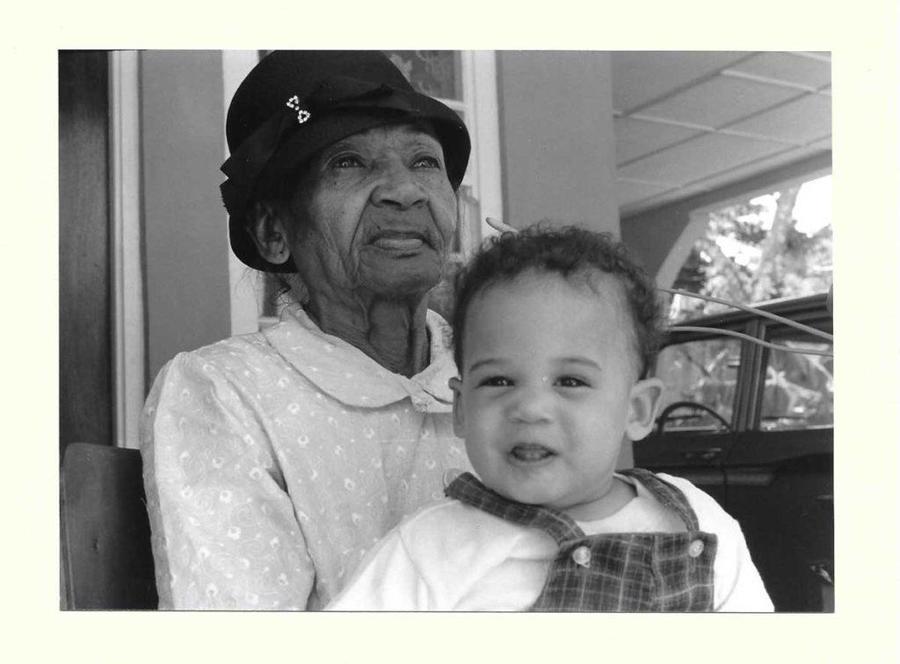 This is a photo of great-grandmother Miss Iris, holding young Kamala in her lap in 1966.
But this shows a common history with a large number of American Blacks, according to Henry Louis Gates Jr., the Harvard historian and host of the PBS series "Finding Your Roots." The five DNA testing companies that work with his project found that the average African American has between 20% and 29% European DNA, Gates wrote in an article titled "Exactly How 'Black' Is Black America?"

A whopping 35 percent of all African-American men descend from a white male ancestor who fathered a mulatto child sometime in the slavery era, most probably from rape or coerced sexuality. In other words, if we tested the DNA of all of the black men in the NBA, for instance, just over one-third descend from a white second or third great-grandfather.

Harris responded to critics in a radio interview in February, 2019:

I think they don't understand who black people are, because if you do, if you walked on Hampton's campus, or Howard's campus, or Morehouse or Spelman or Fisk, you would have a much better appreciation for the diaspora, for the diversity, for the beauty in the diversity of who we are as black people... I am black and I am proud of it. I was born black and I'll die black and I am proud of it. And I am not gonna make any excuses for it, for anybody, because they don't understand.

While political critics can shape their personal definitions of race, the U.S. Census Bureau that offers the official definition in a government report titled "DEFINITION OF BLACK OR AFRICAN AMERICAN USED IN THE 2010 CENSUS":

"Black or African American" refers to a person having origins in any of the Black racial groups of Africa.
The Black racial category includes people who marked the "Black, African Am., or Negro" checkbox. It also includes respondents who reported entries such as African American; Sub-Saharan African entries, such as Kenyan and Nigerian; and Afro-Caribbean entries, such as Haitian and Jamaican. 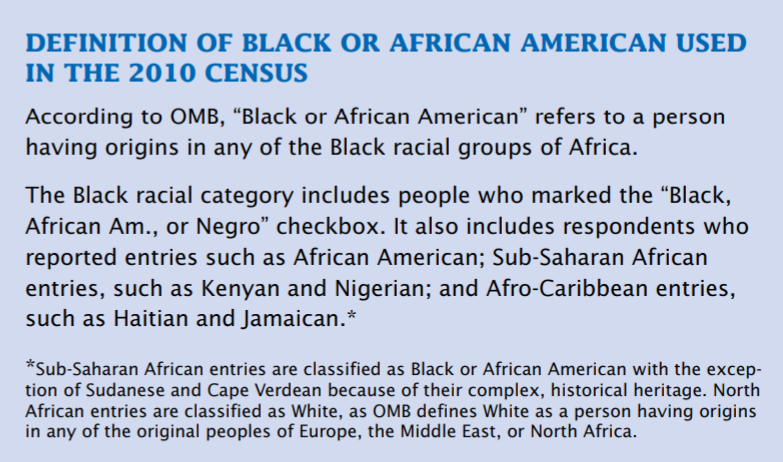 Skeptics of Harris's claim in the debate that she was part of the second kindergarten class to integrate her elementary school cite photos from a 1963 year book for a high school in Berkeley, California showing black students. Since there was only one high school in the district, it was by default integrated. It was not until 1968 that the several elementary schools in Berkeley were integrated, Natasha Beery, director of community relations for the Berkeley Unified School District, told CNN:

Thousand Oaks Elementary, along with all Berkeley public elementary schools, were integrated through a two-way busing plan, beginning in 1968, so Senator Harris is correct in describing her experience in 1969 as the second year of the busing integration program.

You can read the history of that district's integration process in this report titled "A radical decision, an unfinished legacy."

Sen. Harris shared a photo of her as a young child with her mother and sister on Instagram in February 2020: