Is this a real picture that shows President Trump's bald scalp under his hair as it blows in the wind? And does he want it removed from the internet, as the caption claims? No, that's not true: while we can't look into President Trump's head and know if he wants to have the picture removed or not, we can say with certainty that the image in question was digitally manipulated.

The image went viral through a post published on Imgur on August 23, 2019 with the caption "Donald Trump wants this picture removed from the Internet, and I am doing my part" (archived here).

Donald Trump wants this picture removed from the Internet, and I am doing my part

Post with 34 votes and 114 views. Tagged with trump; Shared by TheFolkman. Donald Trump wants this picture removed from the Internet, and I am doing my part 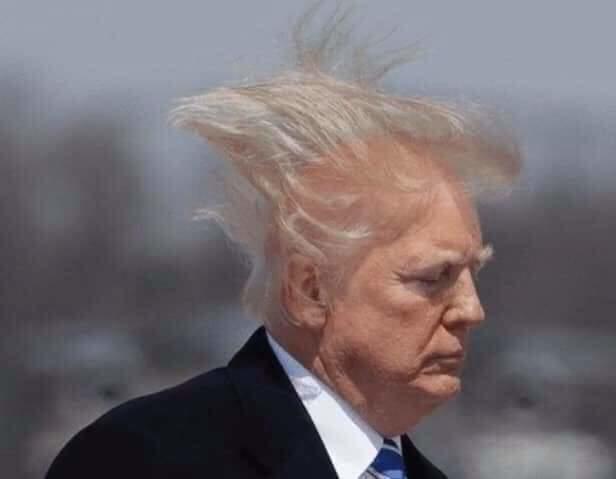 The image was originally taken by Evan Vucci for Associated Press on April 5, 2018 as Trump boarded Air Force One. You can see a gallery of pictures from the event in this BuzzFeed story, including the original picture the manipulated one was based on (it is number six in the list):

While the pictures of Trump's hair blowing in the wind may indeed be hypnotic and unflattering, the one in the Imgur post clearly has been edited to make it even less flattering.

It appears the image was taken from this short video clip (archived here) that shows the transition between the original image and a photoshopped image with a completely bald President Trump: