Did U.S. Sen. Kirsten Gillibrand say "Let women breastfeed on the battlefield"? No, that's not true: It is a made-up quote published by a satirical news site. The junior senator from New York, who is running for the Democratic presidential nomination, never suggested that the women serving on the frontlines during wartime should be allowed to breastfeed their babies. A similar claim that CNN recently posted an online survey on the matter is also fake.

The Gillibrand story originated from an article (archived here) published by RealClear Satire on August 25, 2019 under the title "Gillibrand: 'Let women breastfeed on the battlefield'". It opened:

Speaking to tavern patrons in Bentonsport, Iowa, Gillibrand said her bill strikes at the heart of gender equality and inclusion in the workplace.

"The Consitution guarantees women a God-given right to enjoy access to the frontlines during wartime," Gillibrand said. "This provision must include nursing mothers. It is clearly a civil rights issue."

It is real clear to Lead Stories that this is satire and not true. The biggest hint is the website that published the article is called RealClear Satire. We love satire when it is properly labeled, but even then a surprising number of readers think it is true.

Another reason: Why would women in the U.S. military have their children with them in the foxholes? Men and women serving in the military must leave their families for months or years to serve in war zones. The question of breastfeeding is not relevant.

The point of this satire appears to be social commentary about the debate over rules for breastfeeding in public, along with the debate over women serving in combat roles in the U.S. military.

We suspect the satire site was inspired to publish the story by a viral tweet posted a week earlier, which was also fake. It featured a photoshopped image that purported to be a CNN.com post asking readers to vote on the question "Should women be allowed to breastfeed on the battlefield?"

To breastfeed who, the LTs? pic.twitter.com/BzT6BaHjgn

How do we know this tweeted image is faked? First, the image used is of Jessica Simpson in the 2008 film "Private Valentine: Blonde & Dangerous." The nametag was photoshopped from "Valentine" to "Lena." CNN would not do that. Second, the three CNN writers listed did combine to publish a story on February 22, 2018 titled "Armed school resource officer stayed outside as Florida shooting unfolded, sheriff says." The template of that page was used for the fake image. 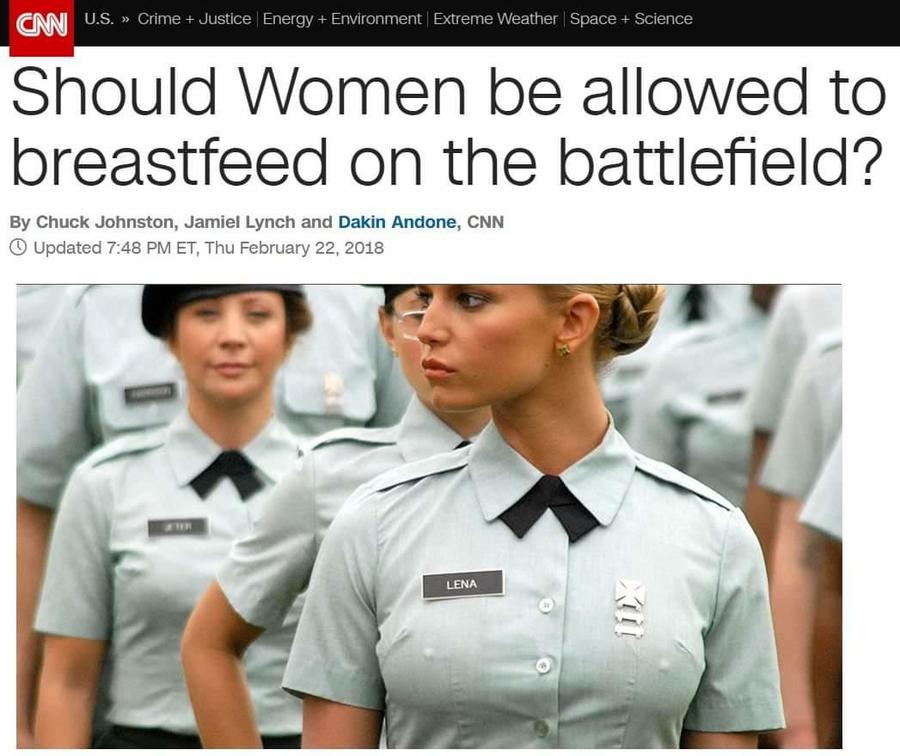 Breastfeeding for women in uniform is actually no joke. The Air Force has made special accomodations for lactating service members by approving a uniform modification, according to a 2018 story titled "Air Force follows Army in approving breastfeeding T-shirts."

The Air Force changed its dress code in July to allow mothers to wear short- or long-sleeved breastfeeding T-shirts with utility uniforms.

The change, which will be phased in Oct. 1, comes with a few rules. The T-shirt must be sand-colored when worn with the airman battle uniform and tan when worn with a camouflage uniform. Also, mothers cannot remove their uniform blouses while nursing or pumping unless they are in a designated lactation room.