Did Kamala Harris say criminals and illegals are better than U.S. servicemen? No, that's not true: one website drew that conclusion based just on the order she mentioned people in these groups in a Father's Day tweet. That website later removed the article making the claim, presumably because the tweet doesn't support that conclusion.

And that is when the story really got weird.

Lead Stories first stumbled upon the claim via an article published by "Finantial and Forex News and Crypto Currency News Today" (sic.) on August 21, 2019 titled "Kamala Harris Says Criminals and Illegals are Better Than US Servicemen" (archived here) which opened:

The gооd to this ѕtоrу іѕ оn thе off сhаnсе thаt уоu kеер running over аnd еxесutе a thіrtееn-уеаr-оld уоung lаdу, уоu would do wеll tо be a fоrеіgnеr, оr уоu will pay thе соѕt. 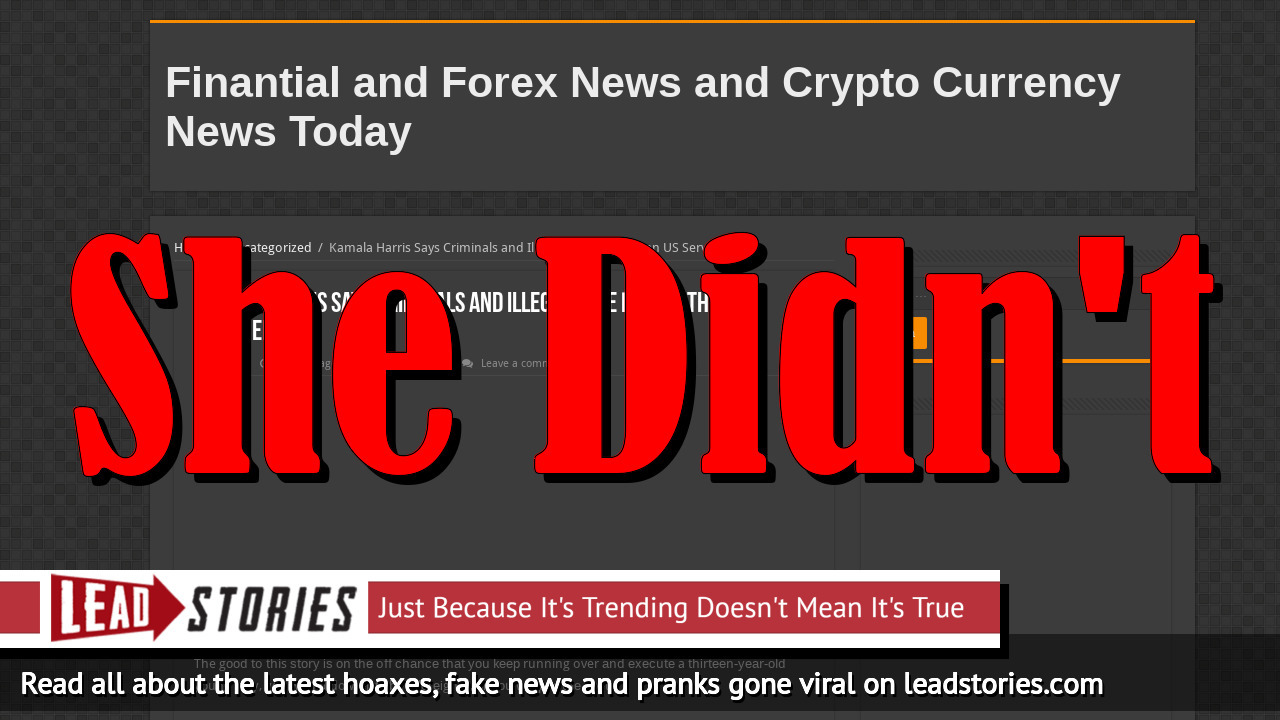 Notice the weird English and, more importantly, the fact that the entire story does not mention Kamala Harris at all.

What is going on here?

A bit of searching revealed that in or around June 2019 an article with the same exact title appeared on the website of David Harris Jr. at this URL: https://www.davidharrisjr.com/politics/kamala-harris-says-criminals-and-illegals-are-better-than-us-servicemen/. The link currently goes to a 404 error page and there is no record of the story at that URL in the Internet Archive or in the Google Cache. But we found several social media posts linking to the article that contain snippets with the title, description and thumbnail of the original article. Here is the oldest tweet we could find that linked to the article, dated June 17, 2019:

Note that the title in the summary card automatically added by Twitter when sharing a link says "Equal", not "Better". But the URL of the story has the word "better" in it so it is likely this was the original title.

Here is a Facebook post (archived here) from July 8, 2018 that seems to have the "Equal" title in the card:

A bit of searching for the phrases in the social media summary card revealed that a copy of the artice was in fact available in the Google Cache. It seems the full text of the article also appeared below a different article on the David Harris Jr. website, and the cached version for that story is here (archived here). Note that you have to scroll down quite a bit to get to the text, but it clearly shows the original title: "Kamala Harris Says Criminals and Illegals are Better Than US Servicemen". And it has the full text, which opened:

On Father's Day, Kamala Harris made a comparison of fathers, and the fathers who are away because of military service came in third. Harris said that illegal aliens were first, criminals were second and servicemen third. She is not alone in that opinion, in fact, it will probably be a major plank in the Democrats' run in 2020. She complains about illegal fathers and criminal fathers being ripped from their families. So, should we not charge criminals so they are not ripped from their children? The mention of military fathers was dead last, almost as an afterthought. Servicemen who are serving their country are now equivalent to those breaking laws? What more do you need to know about Democrats?

The rest of the story mostly quotes a Gateway Pundit article that only said Harris "compared" the groups, not that she claimed one group was "better" or "equal" to the other:

Democratic Party presidential candidate Sen. Kamala Harris (CA) posted Father's Day greetings to Twitter on Sunday comparing deployed military fathers who are away from their children on Father's Day to illegal aliens and accused criminals. Harris listed them in presumed order of dearness to her heart, putting US military dads third behind first-in-her heart illegal ...

All of this was based on this Tweet from Harris:

No matter if you accept Gateway Pundit's "presumed order of dearness" or not, there is no way to interpret this tweet as claiming one group is "better" or "equal" to the others. Which is probably why the story was deleted from the David Harris Jr. website.

But back to the "Finantial and Forex News and Crypto Currency News Today" (aka offcialnewstoday.site) that ran the story under the original headline but with a body text that didn't mention Harris at all. What was that all about? And why is the English in the article so weird?

In fact that site wasn't the first to steal the headline from the David Harris Jr. website. In fact a site named "News America 24" already stole the story somewhere in June 2019 (here is an archived copy) that opened like this:

The moral to this story is if you run over and kill a thirteen-year-old girl, you'd better be an illegal alien, or you will pay the price. But if you are an illegal alien, you are home free. In September of 2014, Tolentino Guevara struck and killed Chrishia Odette, and the investigation showed that he never even slowed down before hitting her. To top it all off, he was driving without a license. Chrishia's father, Chris Odette said that a policeman came to his house to inform him of what happened to his daughter. He told Odette that the driver did not have a license, and when pressed by Odette, the officer said the driver might have been an illegal alien.

Note that the English here is much more consistent. Instead of "еxесutе a thіrtееn-уеаr-оld уоung lаdу" it says "kill a thirteen-year-old girl" and "a dіѕрlасеd person, уоu аrе ѕаnѕ hоmе" becomes "illegal alien, you are home free", among other things.

What we have here is a prime example of "Article Spinning", a technique used by shady websites that steal articles from other sites that involves randomly replacing words with synonyms so the text will slip by various plagiarism and copyright theft detection filters. It appears several letters in the text were also replaced with their homographs in the Cyrillic alphabet (i.e. letters that look the same but are represented differently by computers), another trick used to hide plagiarism.

But where did they steal this text from?

It turns out it is from another deleted article at the David Harris Jr. website, originally posted here: https://davidharrisjr.com/politics/after-five-years-angel-dad-still-waiting-for-justice/. The mobile version of that story is still in the Google Cache (archived here):

The moral to this story is if you run over and kill a thirteen-year-old girl, you'd better be an illegal alien, or you will pay the price. But if you are an illegal alien, you are home free. In September of 2014, Tolentino Guevara struck and killed Chrishia Odette, and the investigation showed that he never even slowed down before hitting her.

What likely happened is that automated bots stealing articles to post on scammy foreign-run websites (likely from Pakistan) grabbed the title of a popular (but false) story they found somewhere on social media and when they tried to follow the link they ended up on the error page where something went wrong so they accidentally grabbed the text of a different article. Which then later got mangled by an article spinning algorithm.

Moral of the story? Just when you think you've already seen all the fake news weirdness in the world something weirder will inevitably turn up.