Did Congresswoman Elise Stefanik give a photographer the finger during an ovation after former ambassador Yovanovitch testimony ended? No, that's not true: the photo was digitally manipulated and journalist Brian J. O'Malley whose retweet of the image made it go viral has since deleted it and issued an apology

Stefanik posed for this picture as Ambassador Yovanovich was getting a loud standing ovation after giving testimony yesterday. NY21 deserves better than this childish loser. 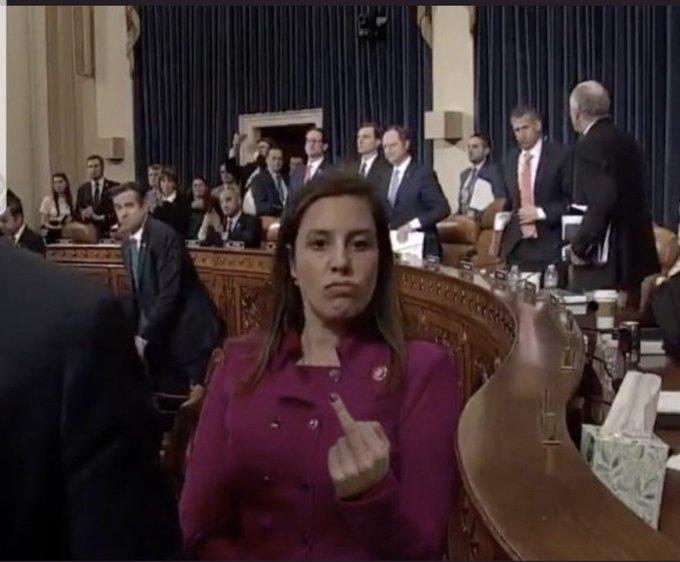 As Stefanik pointed out on Twitter, the image was obviously fake because during the hearing she wasn't wearing the purple nail polish that could be seen in the photo.

The photoshopped picture that the Leftist Twitter mob led by George Conway is circulating is FAKE - I've been so busy exposing Adam Schiff's #regimeofsecrecy that I haven't had time for a manicure in weeks! 💅 Proof from yesterday 👇 https://t.co/TSnTu4bFtX

You can verify this for yourself on this video:

This appears to have been the original image, without the finger:

Rep. Stefanik's expression at the end of the hearing when the crowd is applauding Yovanovitch says it all. pic.twitter.com/jMjLDLugF9

O'Malley since deleted his tweet and put up an apology:

I took down the picture after of Stefanik after someone pointed me to a graphic artist who had it on his timeline as an example of his "work." I won't defame him here.

I take responsibility for it as it was my tweet. It looked real to me, because of a number of factors, (more)

that included my source.

We all make mistakes. I apologize to Congress Member Stefanik. I didn't like the way she treated Ambassador Yovanovich, but that should NEVER justify deliberate and knowing falsification of a picture.

I also apologize to my followers. I didn't know.