Did a Mike Bloomberg presidential campaign intern record and release a video of staffers and supporters doing a #MovesLikeBloomberg dance at a rally in Beverly Hills? No, that's not true: The viral video of an awkward group dance was produced by a comedy sketch group in a Hollywood theater as a parody. It was not connected to Bloomberg's campaign or supporters. Some websites and social media users did not get the joke and wrote about how it was an embarrassment to Bloomberg's campaign.

The vldeo (archived here) was first tweeted by comedian Nick Ciarelli on December 13, 2019, with the message:

Look out #TeamPete because us Bloomberg Heads have our own dance! Taken at the Mike Bloomberg rally in Beverly Hills. #Bloomberg2020 #MovesLikeBloomberg

This is how the video appeared orginally on Twitter:

Look out #TeamPete because us Bloomberg Heads have our own dance! Taken at the Mike Bloomberg rally in Beverly Hills. #Bloomberg2020 #MovesLikeBloomberg pic.twitter.com/UCNo0fRZcE 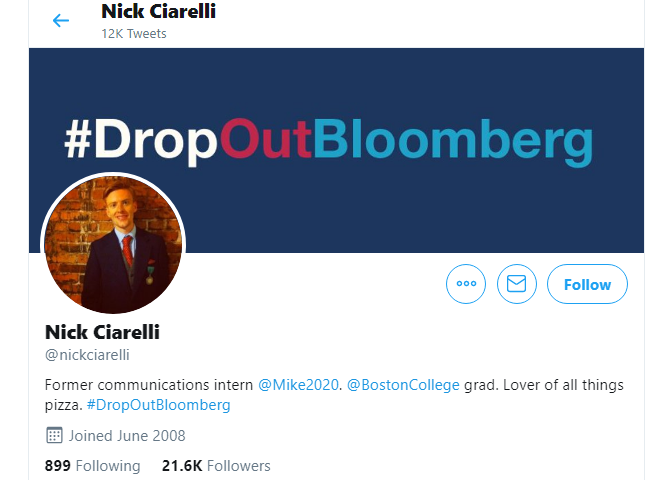 Ciarelli's tweets claimed that the video was in response to this video posted by Pete Buttigieg volunteers in September 2019.

Team @PeteButtigieg showing off their dance moves early this morning ahead of today's #SteakFry in Iowa. pic.twitter.com/ZyCEehrz9A

Ciarelli didn't give up on the prank despite being called on it. He continued to tweet "evidence" that it was real:

As the creator of #MovesLikeBloomberg, I disavow it and the Mike Bloomberg presidential campaign. Read the truth about the dance here. #DropOutBloomberg https://t.co/IJ4ASLzdqz

Lead Stories found evidence it was staged in the UCB Theater on Franklin Avenue in Hollywood on Thursday night, December 12, 2019 -- just hours before Ciarelli tweeted it. Check out Ciarelli's name on the list of comics performing there that night at this link.

For good measure, a Bloomberg spokesman tweeted that there was not connection with the campaign:

To clarify, @NickCiarelli is not an intern for our campaign. And he does not have moves like Bloomberg.

Like much of the satire published about 2020 politics, those who wanted to believe it was real, did not question it:

THIS IS WHAT CULTS DO. THE DEMOCRATS ARE EVIL & INSANE 👇 https://t.co/a2HUz5raHs

The website deleted the story after other websites pointed out their mistake, but other publishers copied and reposted:

A group of supporters for Michael Bloomberg's presidential campaign launched a dance video to show their organizing strength.

The group of mostly white supporters tried to excuse a synchronized dance to the Maroon 5 song "Moves like Jagger" while a booming voice shouted "Bloomberg" every time the song featured the word "Jagger."deo to Show Grassroots Energy

The video was instantly mocked on social media as an astroturf attempt to create buzz for the longshot political candidate who is paying millions of dollars in advertising and organizing to win the Democrat primary.

While a good sense of humor may be needed to make it through the 2020 election cycle, having a skeptical view of unusual content is also required.

This whole #MovesLikeBloomberg and #DropOutBloomberg gag is one of the most well-planned and perfectly orchestrated internet punkings I've ever seen. I'm genuinely in awe of these dudes pic.twitter.com/zq0Xyoay1C