Did Walmart lose $1.2 billion in one day after banning guns? No, that's not true. The story was published by a liberal satire website that tries to mislead Trump supporters and Republicans into sharing made up stories that are clearly marked as satire when you actually click them. Articles from the site are frequently copied by foreign-run fake news websites. The people liking and sharing these stories are enriching foreign website operators or a liberal from Maine via the ad revenue generated with the content which is probably not what they expected or wanted.

The story originated from an article (archived here) where it was published by BustaTroll.org on September 4, 2019 under the title "Walmart Loses $1.2 Billion In One Day After Banning Guns". It opened:

Less than 24 hours after they announced they would no longer cater to all gun owners in every state no matter what, Walmart has lost more than a billion dollars. According to our experts in the financials department, Art Tubolls, Walmart will continue to lose money as long as they continue pandering to liberals:

"Walmart's stock opened this morning nearly 40 percent lower than it closed yesterday. Add to that the lines of people at Target, Kmart, and other fine rertailers looking to keep away from the freedom-haters at Wally's and we estimate more than a billion a day. Closer to $1.2 billion."

The article was posted under a category named "Revenge Satire to Make Taters Tate" on a page with several prominently visible satire disclaimers and logos. However the story was copied by several foreign-run fake news sites that pretended it was real news.

As you can see in the stock chart for Walmart their shares even rose after the announcement was made: 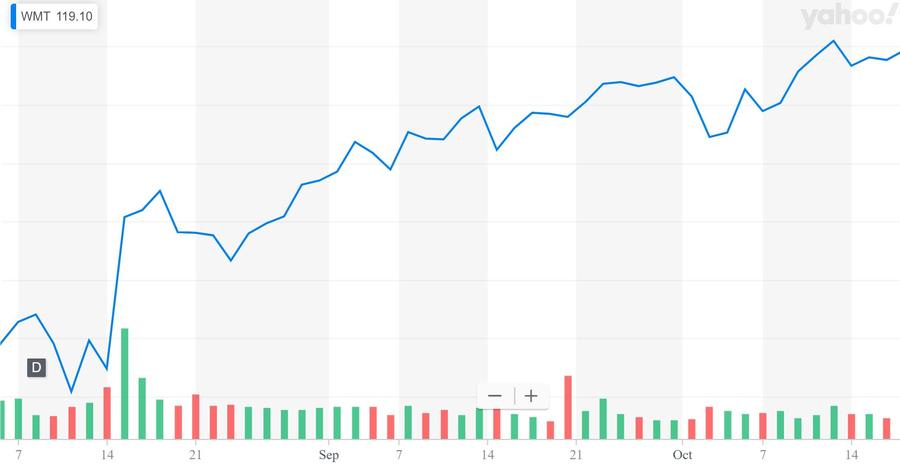 The satirical story came in response to real media reports about Walmart changing some policies related to open carry of guns and the sale of ammunition among other things:

Walmart on Tuesday announced changes to its gun-sales policies and asked shoppers to stop openly carrying firearms in its stores nationwide in response to two deadly shootings at Walmart stores in El Paso, Texas, and Southaven, Mississippi.

The "expert" from the financials department quoted in the story ("Art Tubolls") does not exist: the name is just an anagram for "Busta Troll", the nickname of the owner of the website that published the joke article.