Did an 11-year-old show "how 2 get free high-speed Internet?" No, that's not true: This is a hoax video using images of a former Shark Tank contestant to tout something completely different.

The claim originated from a post on Facebook (archived here) where it was published by "Amazing Beauty Secrets" on January 12, 2020, under the title "Billionaire Invests In 11-year-old Orphan Who Invented Device To Give The World Faster WiFi For Free." The video asked:

Are you sick of slow internet? Would you like Super-Fast WiFi in every corner of your home? 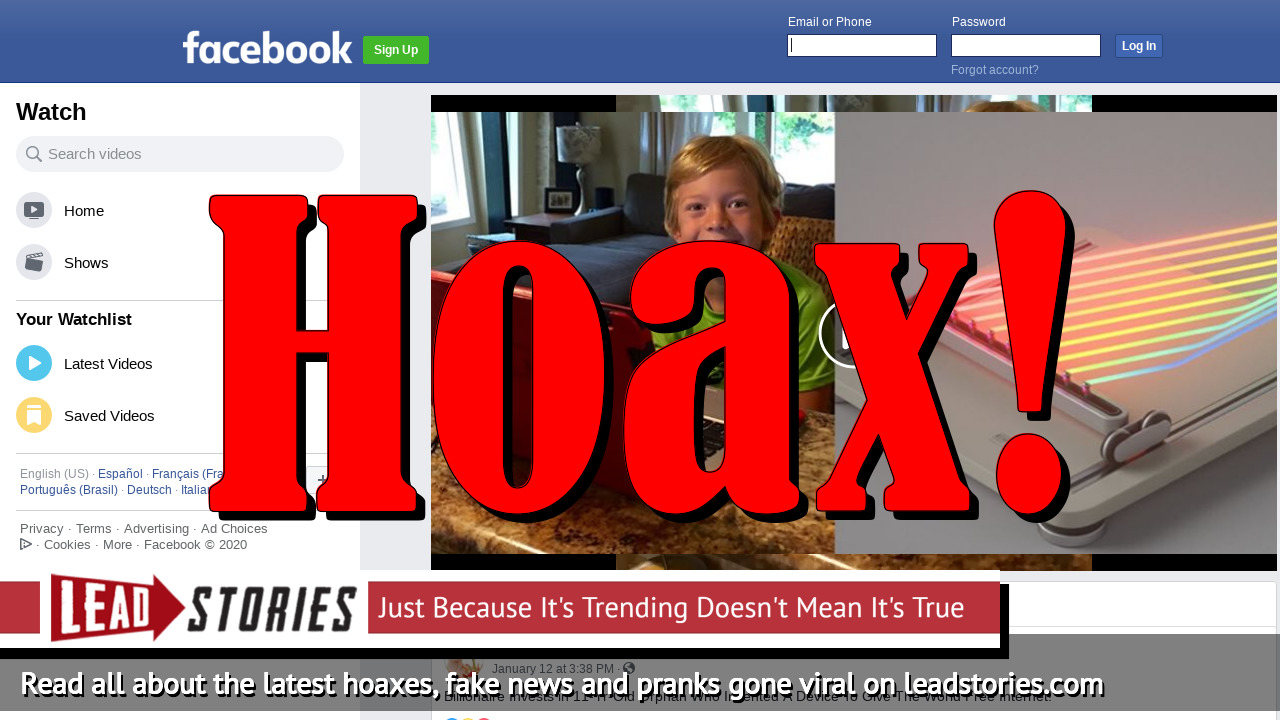 The slickly produced video touts the tale of "Timmy" who, the video says, is an orphan from Detroit who "just destroyed the billion dollar WiFi monopoly" by creating a device that makes WiFi free and opening the Internet to poor and rural populations.

If a kid did destroy a segment of the billion-dollar tech industry, this would indeed be big news. Sadly, the images of the boy depicted in the hoax video were lifted from a remarkable, real-life young entrepeneur named Jack Bonneau. Jack is a former contestant on the hit show Shark Tank who was once featured in the New York Times for his lemonade stand that turned into a successful business.

The fake video uses many of the real images of Jack from his 2016 Shark Tank appearance and other media appearances, including a Ted X talk.

Here is the Shark Tank episode:

The fake video shamelessly uses Jack's images and calls him "Timmy," then hawks what ultimately is a WiFi extender for $45.

There are many things wrong with this: First of all, you still need to pay for WiFi for an extender to work, so the device doesn't make WiFi free at all. You can easily find WiFi extenders cheaper at stores or online. Also, WiFi extenders don't increase a provider's maximum internet speed -- as the video claims. (WiFi extenders can boost coverage in hard-to-reach spots in your home.) Lastly, "Timmy" didn't invent WiFi boosting.

If that's not enough, alarm bells should've gone off when the so-called "orphan" from Detroit is shown wearing a Denver Broncos jersey - instead of a Detroit Lions jersey.

It should also be noted that the real young man whose images were ripped off in the video is not an orphan at all. In the Shark Tank episode, Jack appeared on TV with his father, who is an employee of his son's company. You can visit Jack's company, Jacks Stands & Marketplaces, here.