Did a casting call go out for crisis actors to coincide with a pro-gun rally set for next week in Virginia? No, that's not true: The casting notice is for a project planned weeks after the rally, and role players will help non-governmental organizations (NGOs) prepare for "challenging international environments." The casting agent confirmed in an online message that his project is not associated with the January 20, 2020, protest in Virginia.

The claim originated from a video published by Hard News TV 2 on January 16, 2020, titled "Jan 16 2020 Call Out for CRISIS ACTOR in Virginia..As GOV Declares State of Emergency" (archived here). It opened:

Virginia has an open casting call right now for "crisis actors"...at the same time a massive pro gun rally is to take place. 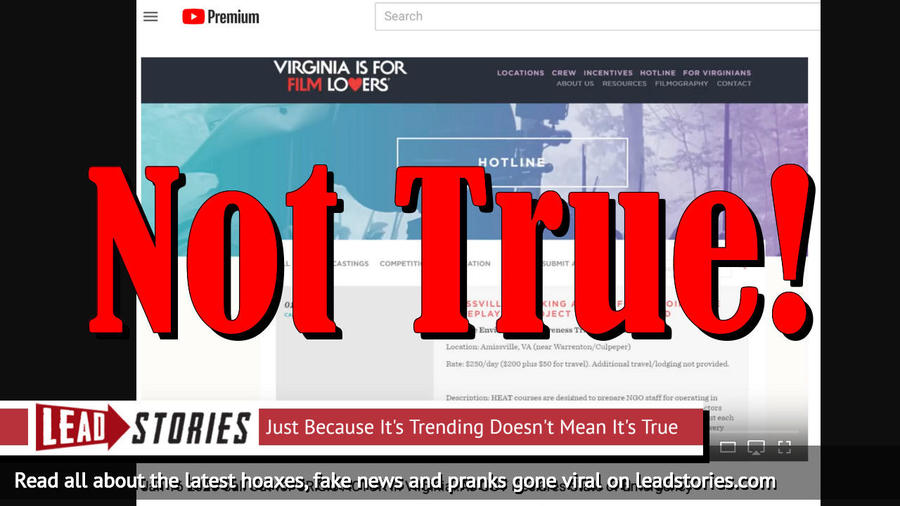 Jan 16 2020 Call Out for CRISIS ACTOR in Virginia..As GOV Declares State of Emergency

In the video, the narrator read the casting call for a project based in Amissville, Virginia, for "Hostile Environment Awareness Training (HEAT)." Here is the description from the January 14, 2020, posting (now taken down but archived here and also still available online here):

HEAT courses are designed to prepare NGO staff for operating in challenging international environments through in-person simulations. Actors take on varying roles (terrorist, IED victim, hostage, rescue team) throughout each workshop. The work can be intense (both physically and mentally) but also very rewarding.

The narrator claimed the casting director had a different intent. In the video, she said:

In response to this video, the casting director Shaun Irving told Lead Stories:

I'm doing a casting call for role-playing work for a company that does simulations to train aid workers in challenging environments."

Irving noted that this is similar to training simulations that are designed for doctors, soldiers, police officers and journalists. In these scenarios, actors will play a variety of roles to help recreate possible situations that participants may encounter in the real world. He called this role-playing "some of the most meaningful work an actor can do."

Indeed, crisis actors do exist. But in recent years, conspiracy theorists have hijacked the term to claim that mass shootings or other events have been staged. For example, some people claim the shooting at a high school in Parkland, Florida, in 2018 was orchestrated by actors to effect political change.

Irving went on to say:

It's appalling to me to see somebody take this good work we're doing and spin it into something that it's not.

Irving added that the next planned simulation would take place in mid-February, about three weeks after Monday's pro-gun rally. Amissville is located approximately 100 miles north of the capital, Richmond, the site of Monday's rally.

The submission form for the casting call has since been updated with following notice, Lead Stories has learned:

NOTE: This is a casting for an actual roleplaying project for professional actors--not crisis actors for a false flag operation. Project takes place in the Warrenton area (more than 2 hours north of Richmond, VA). 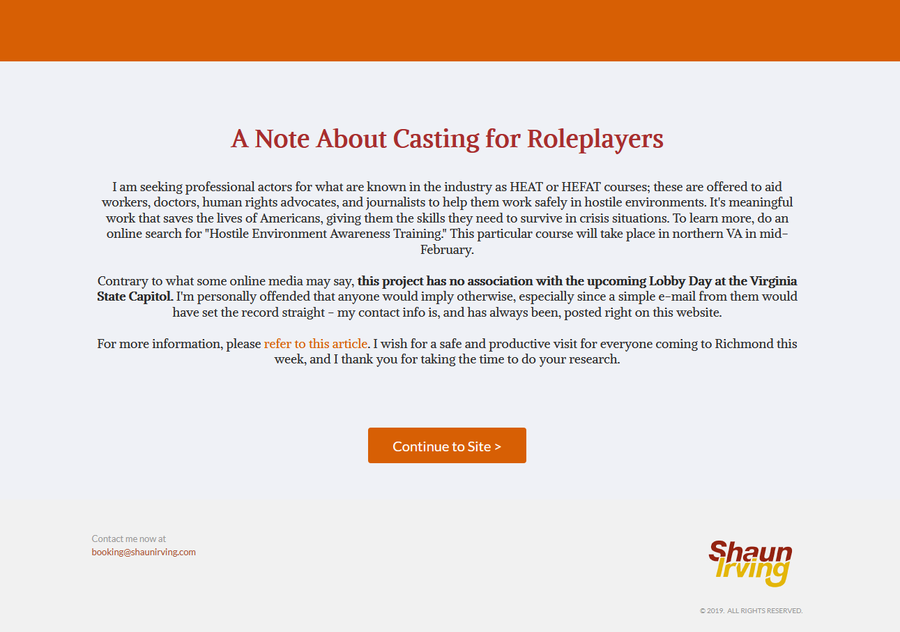 Authorities in Virginia are bracing for the possibility of violence ahead of the rally, which could draw white supremacists and anti-government protesters in addition to pro-gun advocates. The New York Times reported:

Members of numerous armed militias and white power proponents vowed to converge on the city despite the state of emergency declared by Gov. Ralph Northam, who temporarily banned weapons from the grounds of the State Capitol. The potential for an armed confrontation prompted fears of a rerun of the 2017 far-right rally that left one person dead and some two dozen injured in Charlottesville, about an hour's drive from Monday's rally.

Northam, a Democrat, has vowed to push gun control measures through the state legislature, which is now controlled by a new Democratic majority. His proposals have drawn condemnation from pro-gun proponents who argue their Second Amendment rights are being threatened.