Did an eagle land on one of the only Native Americans sitting at a college football game? No, that's not true: the eagle, which did not land as planned on its handler, landed on a Vietnamese-American - not a Native American as claimed in a post making the rounds on the web. The photos and video of the eagle's surprise landing made news when it happened at the 2018 Cotton Bowl in Arlington, Texas. It has resurfaced and is presented in posts as if a random eagle somehow found its way to "one of the only Natives sitting in the stands."

The claim originated from a post (archived here) where it was published by Dyami Thomas on December 30, 2018. It opened:

"An eagle decided to land at one of the two college football games played today. That eagle managed to find probably one of the only Natives sitting in the stands at the game." 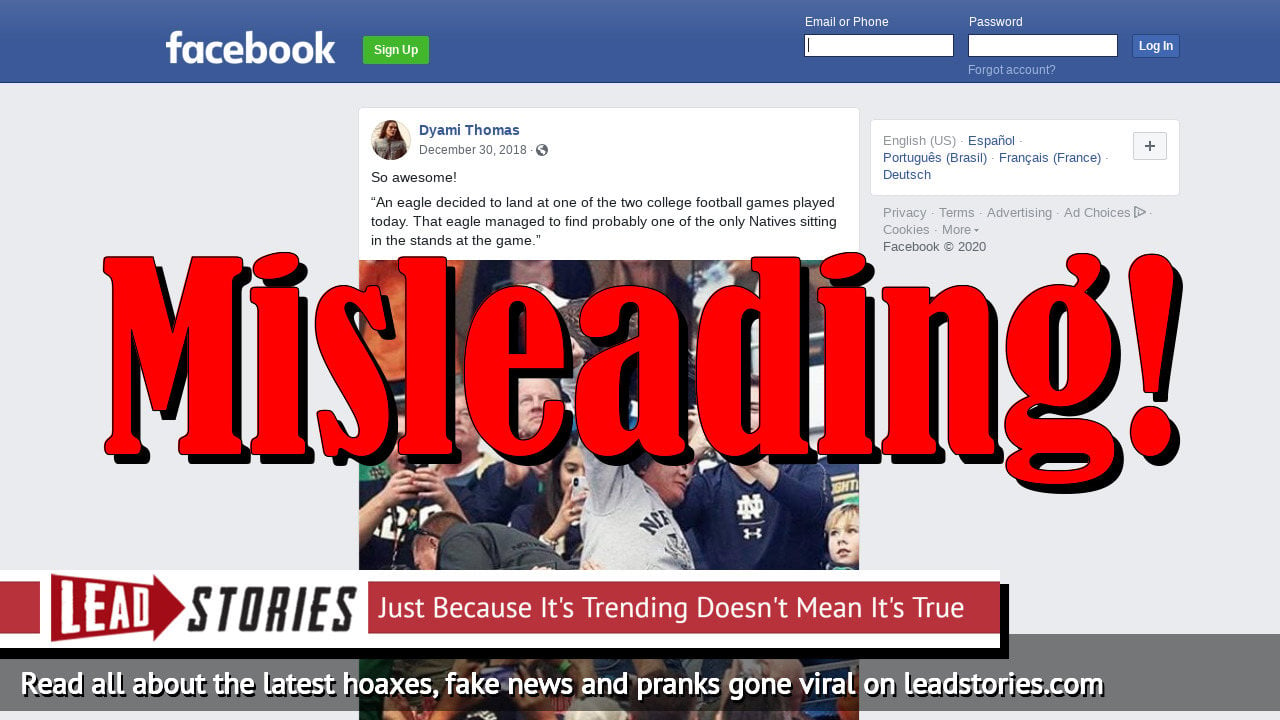 The photos and video are real; ESPN and other outlets covered the incident on December 29, 2018. What is not true is the Facebook caption that identified the man holding the eagle as a Native American. Sports Illustrated, among others, identified him as Tuyen Nguyen, a longtime resident of South Bend, Indiana, and a Notre Dame Irish fan. Nguyen is of Vietnamese descent.

According to SI.com, the eagle, named Clark, was supposed to land on his handler during the national anthem. Instead, video of the incident shows the bird landed on a man in a green shirt, Albert Armas, who later said:

I was scared crapless."

Clark then had a second accidental landing on the outstretched arms of Nguyen. He told SI.com:

"When I saw the bird land [on Armas], I thought, the bird had to be very tired. So I put my hand out to see what happens. And it landed on me. It was very interesting. I was very excited. It was amazing. I couldn't even believe it."

A student journalist tweeted at the time that Clark managed just fine in dress rehearsals: