Did Romanian scientists develop a vaccine that can cure caucasian people only? No, that's not true: The story is a hoax and laced with editorialized political rants. The site making the claim is known for publishing a mix of real news and conspiracies. To date, there is no known cure for the coronavirus, which originated in Wuhan, China, last week, and has killed at least 170 people.

The claim surfaced in an article published by The European Union Times on January 30, 2020, titled "Romania develops Coronavirus Vaccine able to Cure White People only" (archived here). It opened:

Romanian scientists have just developed a working vaccine which is able to cure the 2019-nCov virus (also known as novo coronavirus).
Turns out human races are different in more ways not just skin color as mentally incapacitated liberals would have you believe. Liberalism is the biggest disease the world has ever seen, its a disease so great that it kills people in many ways. One of the ways now is the inability to study this virus the right way. 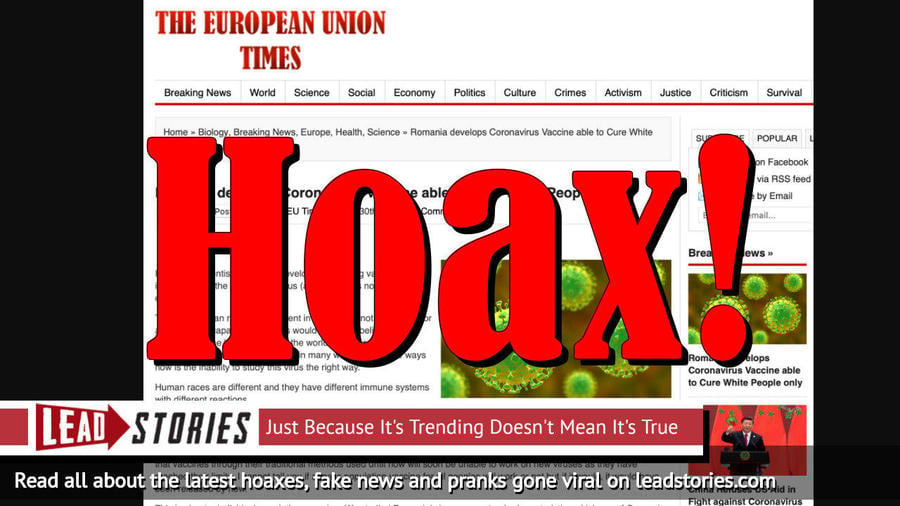 Romanian scientists have just developed a working vaccine which is able to cure the 2019-nCov virus (also known as novo coronavirus). Turns out human races are different in more ways not just skin

The article is not written in a neutral, unbiased voice. The second paragraph referred to "mentally incapacitated liberals" and added, "Liberalism is the biggest disease the world has ever seen." Later in the story, the author wrote that a "liberal curtain has been pulled over our eyes."

The story linked to an article on the Romanian pro-government website, Antena3, which mentioned a proposal from OncoGen, a research center in Timisoara, Romania. The site said:

OncoGen's suggestion is nothing more than a proposed solution, a "novel approach" in the company's words. Because researchers there could not create a large-scale vaccine, it recommended focusing on a solution for the Romanian population.

However, there is no evidence that Romanian scientists have actually developed any vaccine that could cure the coronavirus, much less one that would vaccinate just white people.

Users sharing the made-up story online have suggested, perhaps in jest, that a possible vaccine is discriminating against certain people:

https://t.co/GM9EyqsIWd
TFW even vaccines can be racist

Even so, the headline is inaccurate, and the story does not back up assertions that a vaccine has been developed.