Did a large number of birds fall dead from the sky due to 5G wireless technology? No, that's not true: The videos being shared do not offer any evidence that 5G - the fifth generation cellular network - has caused the deaths of the birds. The National Audubon Society has said the technology does not kill birds, despite online rumors to the contrary.

The claims originated from a YouTube video published by Ison Willis on November 8, 2019, titled "Where 5G is, birds fall dead from the sky" (archived here). It opened: 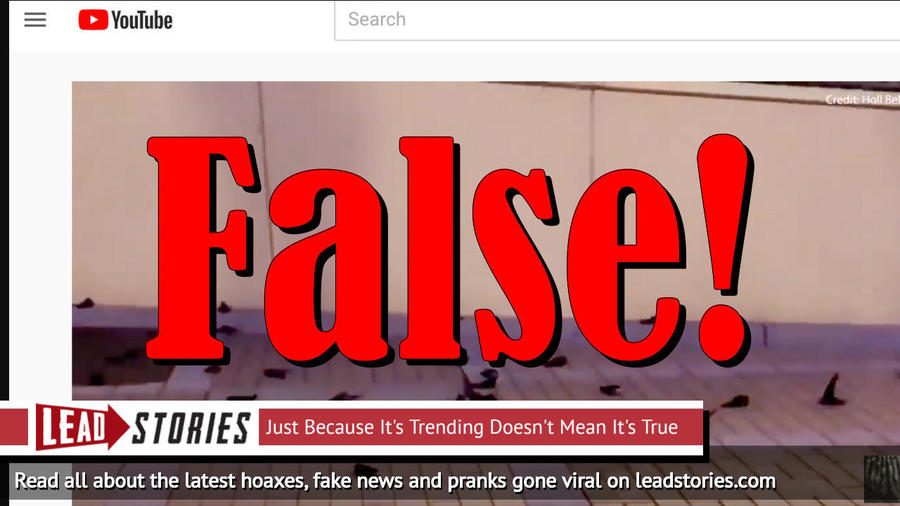 Where 5G is, birds fall dead from the sky

The video is a hodgepodge of various clips of birds - some dead, some flying in flocks. The video description included links to several stories that offer some explanations for the phenomena. For example, Lead Stories has already debunked one of the articles that had suggested 5G may have played a role in the deaths of a large number of birds in North Wales in December 2019. As we noted in our fact check, Vodafone did not have the latest cellular technology installed in the area.

The videos included footage of a large number of birds that were killed when they crashed into the NASCAR Hall of Fame building in Charlotte, North Carolina. The city was an early test market for the latest wireless technology, but that does not mean it caused the deaths of these birds. CBS News reported that they were chimney shifts, a type of migratory birds. It said:

While chimney swifts typically fly higher, rainy weather can cause them to forage lower to the ground. Additionally, bright lights are known to attract birds and can cause them to slam into buildings at high speeds. According to the National Audubon Society, building collisions kill hundreds of millions of birds every year.

The video also showed flying flocks of starlings. While the swarm was a fascinating sight of nature, there was no suggestion that it had anything to do with 5G. Also, the birds were not falling dead from the sky but were very much alive.

One video clip purported to show birds in Coventry, England, falling from the sky. The caption claimed that it happened just as "5G is rolled out in Coventry." However, a fact check by thatsnonsense.com said that linking the deaths to 5G appears to be baseless. It noted:

As for the circumstances in this particular video, local residents and several people who work in the hospital have suggested it is likely caused by pied wagtail birds nesting in a nearby tree becoming startled by a nearby road cleaner operating in the early hours of the morning, and flying into the transparent glass panes at the hospital entrance where the video was filmed. Local media covering the incident have suggested that the birds appear to have twisted necks, suggesting they have collided with the glass.

Some workers at this particular hospital have reached out to us on social media telling us that it has occurred before, albeit to a lesser extent than that depicted in the video.

The video made other claims that animals have been trying to warn us of something, or that "the birds are just fed up with the Illuminati like we are." The narrator added, "They want no part of this corrupt world." What precisely he meant by that is not entirely clear. He also suggested that global warming is a hoax and shouldn't be blamed for the deaths of the birds.

Be that as it may, the National Audubon Society, a non-profit environmental and conservation organization, has said that 5G radio waves do not kill birds. It traced the origins of the online hoaxes and conspiracy theories about 5G killing birds:

The first part of this saga is fairly straightforward: No, 5G--the fifth generation of our mobile cellular network--does not kill birds. "Radio wave emissions above 10 MHz from radio transmission antennas (including cell telephone towers) are not known to harm birds," says Joe Kirschvink, a biophysicist at the California Institute of Technology who specializes in magnetics, in an email.

Indeed, 5G wireless technology is not believed by scientists to kill birds. The videos being shared show some instances of dead birds, but they also show flocks of birds flying or nesting in trees. These birds were very much alive, so that undercuts the assertion that 5G technology is killing them en masse.

We fact checked stories on YouTube before. Here are our most recent articles that mention the site: