The story originated from a press release published by the conservative activist group Judicial Watch on February 3, 2020, titled "Judicial Watch: Eight Iowa Counties Have Total Registration Rates Larger than Eligible Voter Population - at Least 18,658 Extra Names on Iowa Voting Rolls." The report then got picked up by other conservative groups: 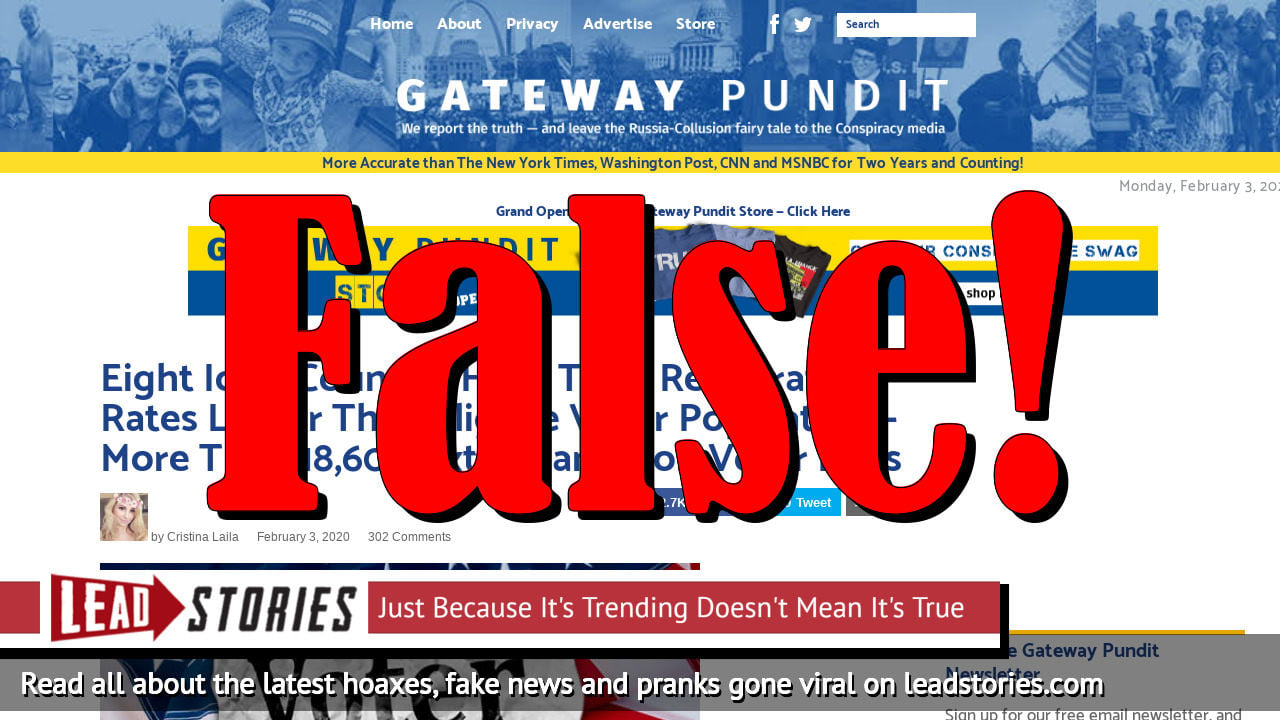 Here is the Gateway Pundit picking up the story, for example:

The press release coincided with the start of the Iowa caucuses, the first real voting test for primary candidates. The Gateway Pundit shared the story with its audience but later revised it after Paul Pate, the state's Republican secretary of state, sought to put an end to the story, tweeting about the misinformation and using the hashtag #FakeNews.

False claim. Here is a link to the actual county-by-county voter registration totals. They are updated monthly and available online for everyone to see. #FakeNews https://t.co/bM1bj51eKA

However, we looked at more recently released census data about the 2014-2018 period found here to get the number of eligible voters in each county and compared it to the most recent Iowa Secretary of State's office numbers about voter registration.

Five of the eight counties indeed had a voting age population higher than the total number of registered voters (which includes inactive voters), totaling a 9,138 extra names - not 18,658. But taking a closer look, a more accurate number to use would be "active registered voters."

The Secretary of State's office sends out notices to registered voters periodically and considers voters inactive "who have not returned the card or otherwise responded to the notice." Under the federal election law, 52 USC 20507 (d), these inactive voters can still vote if they update their address information on the day of the election (the exact procedure differs depending on where they live at that moment and where they are trying to vote). Only if they fail to vote in two federal elections after getting the notice are they struck from the rolls.

Having inactive voters on the rolls does not automatically mean there is anything fraudulent going on; it could just mean people moved away and didn't bother to update their registration. Indeed, the precise goal of having a system in place to track inactive voters is to be able to eventually remove them from the voter rolls.

Only one of the counties, Dallas County, had a higher number of "active registered voters" than the voting age population -- 59,667 compared to the voting age population of 57,045. It should be noted that several area colleges are located in Dallas County with students who don't always live where they vote - so the census count would not include them. A similar effect might be at play in Johnson County, which is home to the University of Iowa.

This table provides a look at the numbers for the counties that came under scrutiny by Judicial Watch compared to the numbers for February 2020 provided by Iowa's Secretary of State office.

With the most recent data, we only find five counties with more total registered voters in 2020 than citizen voting age population in 2018 (and only one with more active registered voters). So, the headline from Judicial Watch is not correct in claiming this applies to the present.

In their press release Judicial Watch stated their data sources were the "U.S. Election Assistance Commission (EAC) in 2019 and the most recent U.S. Census Bureau's five-year American Community Survey." The EAC did release the Election Administration and Voting Survey (EAVS) in 2019, but it covered voter registration info from the 2018 election. And at the time when the Judicial Watch report was being created, the latest five-year survey from the U.S. census covered 2013-2017. Looking at that data gives following table:

Using those numbers, there are indeed eight counties that had more registered voters in 2018 than they had citizen voting age population in 2017.

In a statement to Lead Stories, Judicial Watch's Tom Fitton said: "Again, the new Census data and the interim voter registration information does not obviate our study, but is consistent with it. The Secretary of State is playing games and provides no specific numbers, only pointing to a data set and ignoring that the new data set confirms our concerns. We've seen it before on this issue."

Lead Stories does not agree with the claim in the Judicial Watch headline after looking at the specific numbers found in the most recent data set. The statement in the Judicial Watch headline does not apply to the present situation, and the lack of mention of active versus inactive voters in the press release might mislead readers into thinking there is more going on than what is actually the case.