Did 449,163 registered voters decline jury duty because they were not U.S. citizens? No, that's not true: The viral claim has been debunked several times before, and the meme being shared offers no sourcing for this claim. It suggests that voter registration lists are the only source for prospective jury pools. However, there are several other databases from which to draw names, including the Department of Motor Vehicles' list of licensed drivers, California's Deputy Secretary of State told Lead Stories.

The claim originated from a post (archived here) published by Keith Vaughn on February 24, 2020. The caption included some hashtags: 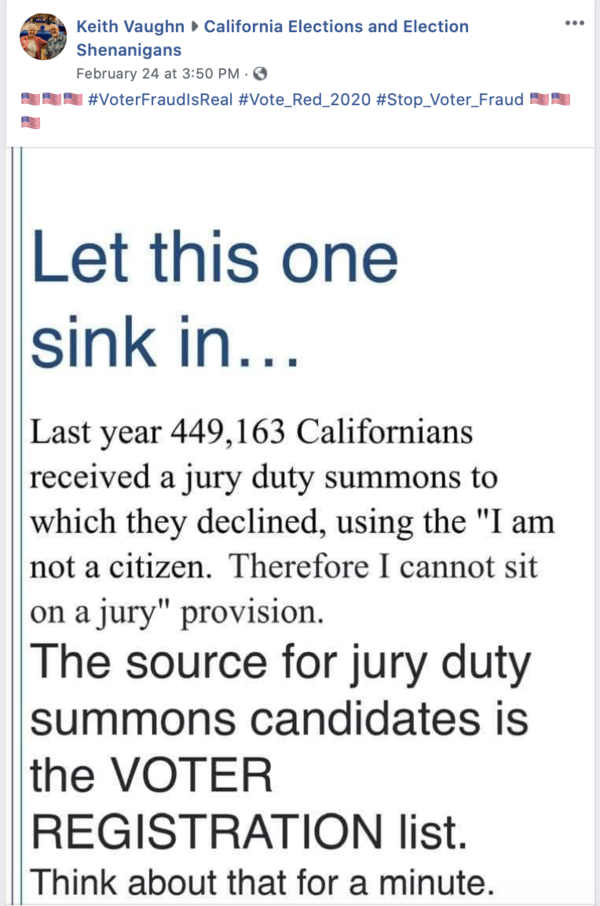 The post offered no sourcing for the numbers or claims being made. Several fact-checkers have previously looked into these suggestions, including Snopes, PolitiFact, and the CBS affiliate in San Diego, California. All of them concluded there is no evidence to back up these numbers.

The central assertion is that 449,163 non-citizens were registered to vote and that there is massive voter fraud in California. The suggestion that so many people were pulled from voter registration lists is misleading because several other sources are used to obtain possible jurors.

Lead Stories reached out to the California Deputy Secretary of State Paula Valle about the meme. She said:

The claim that more than 449,000 Californians received jury summons who were not U.S. citizens because they were listed as registered voters is false and inaccurate. Jury service lists rely on numerous sources, which include DMV data, telephone directories, utility company lists, customer mailing lists and voter registration lists.

As of January 2, 2015, undocumented residents in California can obtain driver's licenses. So, theoretically, they might receive a jury summons because they were on that list - not because they were registered to vote.

Valle said the lists are generated pursuant to CA Code of Civil Procedure 197 and 198:

CCP 197:
(a) All persons selected for jury service shall be selected at random, from a source or sources inclusive of a representative cross section of the population of the area served by the court.  Sources may include, in addition to other lists, customer mailing lists, telephone directories, or utility company lists.

(b) The list of registered voters and the Department of Motor Vehicles' list of licensed drivers and identification cardholders resident within the area served by the court, are appropriate source lists for selection of jurors.  These two source lists, when substantially purged of duplicate names, shall be considered inclusive of a representative cross section of the population, within the meaning of subdivision (a).

(c) The Department of Motor Vehicles shall furnish the jury commissioner of each county with the current list of the names, addresses, and other identifying information of persons residing in the county who are age 18 years or older and who are holders of a current driver's license or identification card issued pursuant to Article 3 (commencing with Section 12800) of, or Article 5 (commencing with Section 13000) of, Chapter 1 of Division 6 of the Vehicle Code .  The conditions under which these lists shall be compiled semiannually shall be determined by the director, consistent with any rules which may be adopted by the Judicial Council.  This service shall be provided by the Department of Motor Vehicles pursuant to Section 1812 of the Vehicle Code .  The jury commissioner shall not disclose the information furnished by the Department of Motor Vehicles pursuant to this section to any person, organization, or agency.

CCP 198:
(a) Random selection shall be utilized in creating master and qualified juror lists, commencing with selection from source lists, and continuing through selection of prospective jurors for voir dire.
(b) The jury commissioner shall, at least once in each 12-month period, randomly select names of prospective trial jurors from the source list or lists, to create a master list.
(c) The master jury list shall be used by the jury commissioner, as provided by statute and state and local court rules, for the purpose of (1) mailing juror questionnaires and subsequent creation of a qualified juror list, and (2) summoning prospective jurors to respond or appear for qualification and service.

Indeed, there are many sources from which to select possible names for jury service. It is incorrect to suggest that all of those who seek to be excused from jury duty are also on the voter registration list.