Did Bernie Sanders officially end his Democratic presidential primary run, and then endorse Trump for president? No, that's not true: Sanders has been nothing but critical of Trump, publicly calling him a jackass on the campaign trail. In any case, this claim is a work of satire put out by a liberal from Maine who trolls conservative supporters of Trump.

In an absolutely stunning development today, Senator Bernie Sanders announced he is immediately suspending his campaign for the Democratic nomination and will endorse President Donald J. Trump in the 2020 election.

While details are still coming in, this could be a game-changer for President Trump. Bernie Sanders has millions of loyal followers that could help push Trump over the edge. And widen his already huge lead in the polls over Joe Biden. Sanders currently is polling at around 45% of the Democratic electorate, so if even if a fraction of his supporters follow his move, Trump will be unbeatable in November. 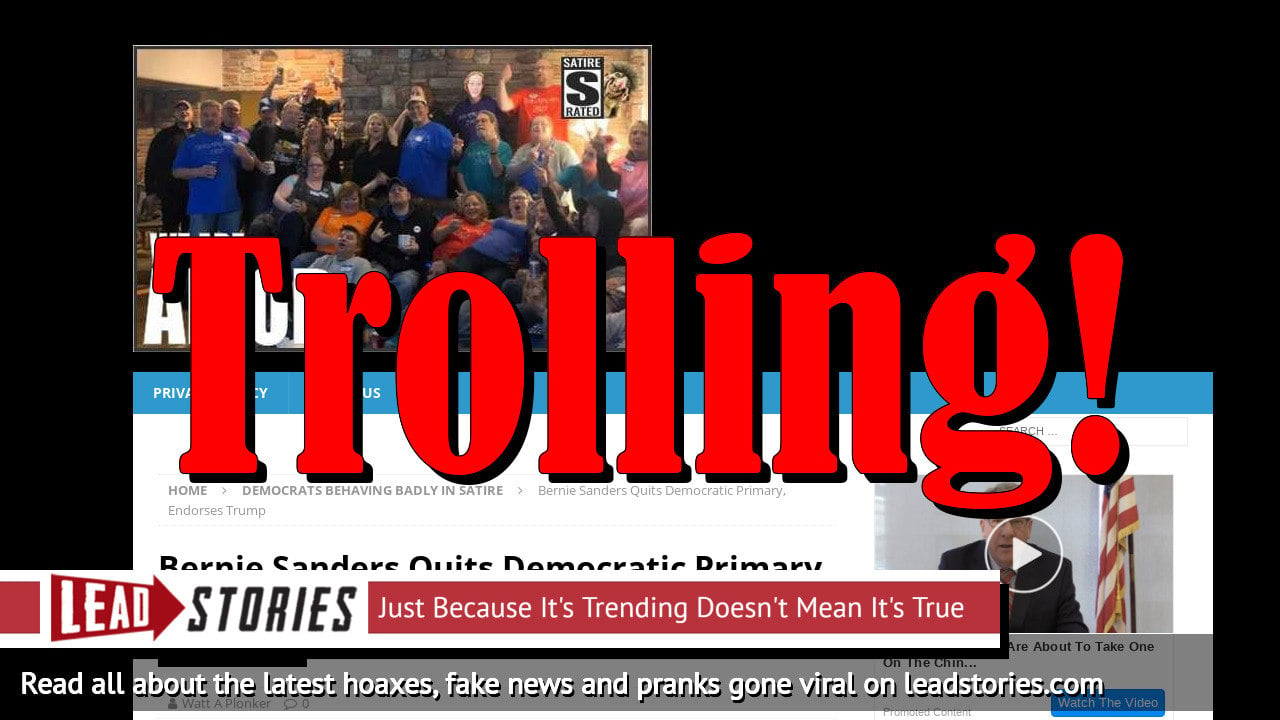 Bernie and his bots to stick it to Joe Biden.

Sanders, who at one point was the Democrats' frontrunner, has suspended his campaign after several losses to former Vice President Joe Biden in key primary states.

However, it would be stranger than fiction for the socialist-leaning senator from Vermont to give his approval to Republican Trump. It's all a hoax put out by a network of satirical wesbites.

The site ALLOD comes with a clear satire disclaimer at the bottom of each article:

The owner and main writer of the site is self-professed liberal troll Christopher Blair, a man from Maine who has made it his full-time job to troll gullible conservatives and Trump supporters into liking and sharing his articles. He runs several other websites, including bustatroll.org and bebest.website. Sometimes, he is also known under his nickname "Busta Troll." A second man working on the sites is John Prager, as revealed in this earlier story we wrote.

November 17 The only light in the house came from the glow of three computer monitors, and Christopher Blair, 46, sat down at a keyboard and started to type. His wife had left for work, and his children were on their way to school, but waiting online was his other community, an unreality where nothing was exactly as it seemed.

NewsGuard, a company that uses trained journalists to rank the reliability of websites, describes wearethellod.com as:

We wrote about wearethellod.com before. Here are our most recent articles that mention the site: