Did U.S. Rep. Ilhan Omar, a Minnesota Democrat, vow to cut social security entitlements for seniors at a rally? No, this is not true. A satire website with a long history of hoaxes originally posted the original article to troll conservatives and fool them into sharing the made-up story. It succeeded.

The claim reappeared as an article (archived here) published by CoffeeRelax.co on March 5, 2020, titled "Omar: 'When We Win in November, We Will Eliminate Social Security Entitlements for Seniors.'" The story, which did not carry any satire labeling, opened:

"At a rally this week for communist fascist Bernie Sanders, Muslamic Congresswoman Ilhan Omar railed against entitlements for seniors, vowing to cut them and eventually eliminate them completely.

"These old people haven't earned these entitlements! We need more funding for our infrastructure and education centers and the biggest government expense is social security entitlements for senior citizens. We will have these phased out completely by 2024. We need to look toward the future generations and provide them welfare benefits, not the past of these older generations. Their time is over. They ruined the economy and must be made to pay!" 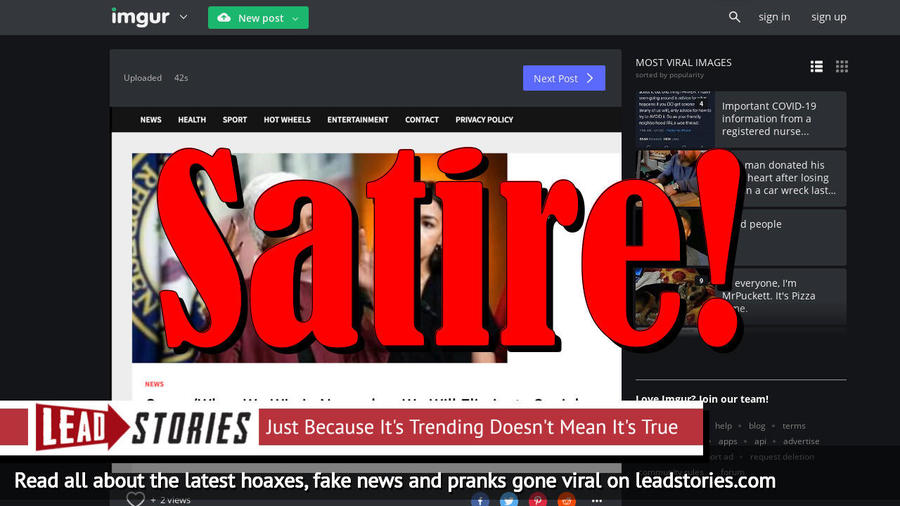 Users on social media only saw posts like this: 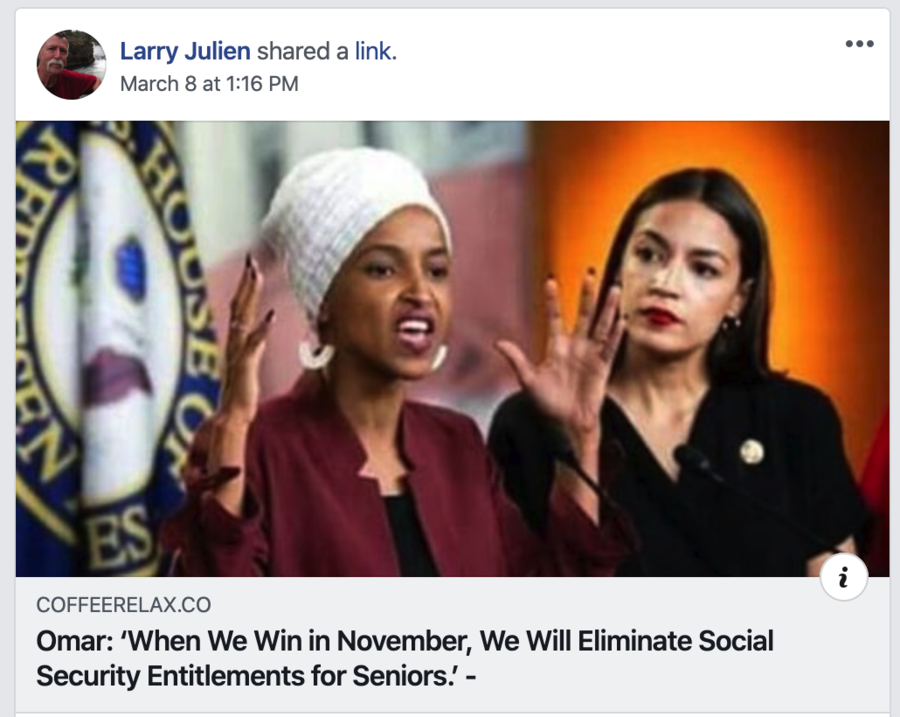 This story is not true and is from a satire post that was originally published in December 2019. The claim has been previously debunked, including by Politifact. Still the story has raked up over 7,000 shares on CoffeeRelax.co since the site first posted it last week.

The story began circulating late last year, when it was first posted on the website Daily World Update - which claimed both Omar and U.S. Rep. Alexandria Ocasio-Cortez, a New York Democrat, made the comments at a "communist" rally. Daily World Update is a site that is part of well-known troll Christopher Blair's on-line group of satire websites. The website clearly states it is "Satire for Flat Earthers, Trumpsters and Y'All Qaeda."

A quote in the story attributed to Omar claims:

America is for the young. It is the youth of this country that work to make it great. They are productive and tax paying. They contribute.....unlike our senior citizens who only take. Retirees are dead weight."

The story also claimed Omar told the rally that seniors in America were "deadbeats."

"In socialism, we work for the good of the collective. The whole matters more than the individual. People make sacrifices.

Social Security and Medicare cost America tens of billions of dollars every year. And for what? Fora bunch of deadbeats with nothing left to give. That money would be far better spent on low income housing and welfare for the young people of America who just need a leg up."

Daily World Update is part of the "America's Last Line of Defense" network of satire websites run by self-professed liberal troll Christopher Blair from Maine along with a loose confederation of friends and allies. Blair has been in a feud with fact-checking website Snopes for some time now and has also criticized other fact-checkers in the past who labeled his work "fake news" instead of satire. In reaction to this, he has recently rebranded all his active websites and Facebook pages so they carry visible disclaimers everywhere.