The claim appeared as a blog post (archived here) published by Helena The Nationallist Voice on April 17, 2020, under the title "Gates - WHO - World Bank - just lost billions as President Trump - Trumped!" It opened:

In 2017, the World Bank collaborated with WHO, Bill Gates, Soros, and a number of governments and private investors to create Pandemic Bonds to assist aid agencies with managing the crisis that a pandemic outbreak would cause. Sounds reasonable - sortof..." 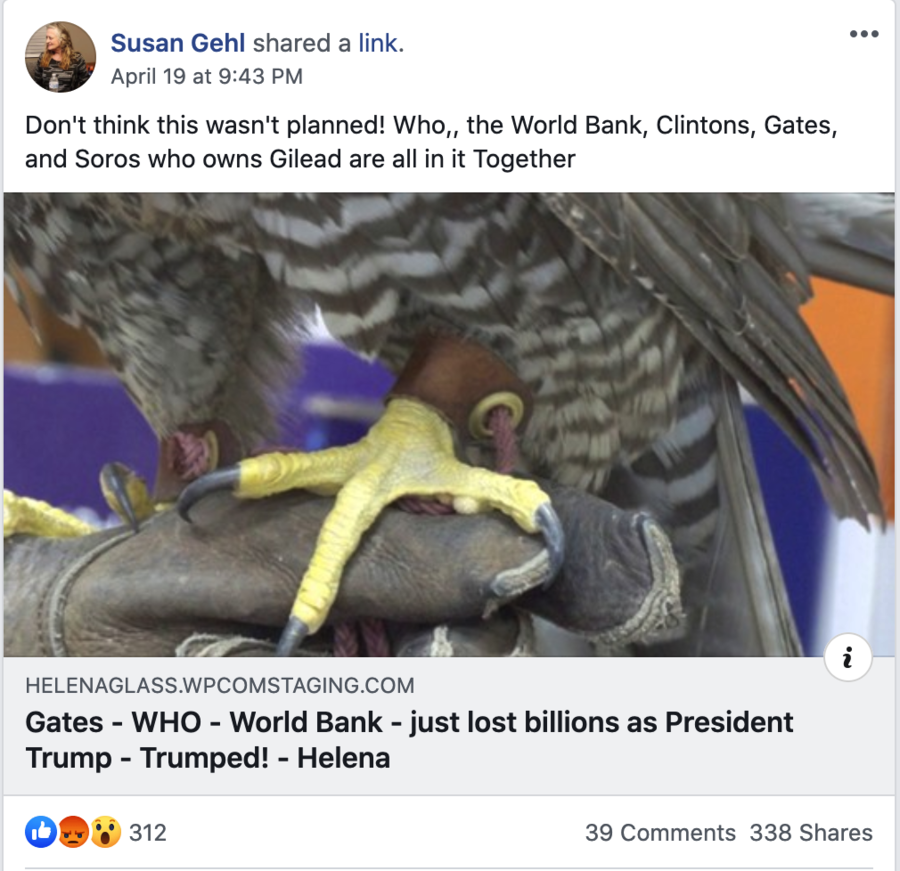 The article erroneously claims a Gates connection to "pandemic bonds," losing billions -- and Trump "discovering" a cure for the novel coronavirus. Truth is, there is no known cure for the virus.

Let's break it down.

What are pandemic bonds? They were created by the World Bank in 2017 after the end of the Ebola outbreak of 2016 to give aid to impoverished countries in the future dealing with a pandemic. The pandemic bonds funds are detailed on the World Bank website here, they were set up as a sort of insurance to make sure emergency funding would be available during a pandemic.

In short, investors buy these bonds and earn interest on their money, effectively betting that a pandemic will not happen -- or at least not until they see a return on their investment. In this case, the bet didn't pay off and they lost (some) of their invested money.

Initially, the Bank's Pandemic Emergency Financial Facilty was created to establish $500 million in emergency funding. The Bank said on June 28, 2017:

The World Bank (International Bank for Reconstruction and Development) today launched specialized bonds aimed at providing financial support to the Pandemic Emergency Financing Facility (PEF), a facility created by the World Bank to channel surge funding to developing countries facing the risk of a pandemic.

According to the World Bank, Japan and Germany funded the first round of the bonds.

Bill Gates did not fund the pandemic bonds at the World Bank. Neither did the WHO nor "Soros" -- presumably referring to billionaire George Soros.

There had been controversy over the bonds not being issued during the early stages of the coronavirus outbreak, but the World Bank announced on April 27 that they would be releasing the funds.

COVID-19 is one of the viruses covered by the PEF insurance window. As per the report received on 4/17/2020, all activation criteria including outbreak size, spread and growth have been met.

The PEF Steering Body will meet to determine how the proceeds of the PEF bonds and swaps will be allocated to IDA countries and then announce those decisions.

Here's a rundown of the bonds:

According to the Financial Times, $320 million in bonds were issued in 2017 and delivered interest payments to investors -- funded by donor nations Japan, Australia and Germany. Once criteria were met, the funds were disbursed to the countries in need and the investors were set to lose money. But there is no proof that Gates is an investor in the pandemic bonds.

Under the rules governing the bonds, a minimum of 2,500 deaths with more than 20 outside of the country of origin are required to trigger the release of the funds. That threshold has been met. As of April 30, 2020, there were at least 233,639 deaths from the novel coronavirus. The Guardian wrote:

Bodo Ellmers, director of Global Policy Forum's sustainable development finance programme, said: 'The idea was that it would be a quick instrument, but it was set up with such stringent criteria that the risk for investors is very low. The design, taking the number of dead people as a criteria, is very cynical.'

The scheme's 'fundamental flaw' is that it was aimed at preventing a pandemic but would only pay out when a pandemic was already underway, said Ellmers."

The World Bank said a PEF payout had previously been triggered after the Ebola outbreak of 2018 and 2019 in the Democratic Republic of the Congo, providing a total of $61.4 million to fight the disease.

But the blog goes further, claiming that Gates was scheming to make billions off the possible coronavirus medicine remdesivir, an antiviral drug developed by the Gilead Sciences pharmaceutical company. Gates, it reads, was thwarted by Trump's "discovering that an old school malaria drug would cure COVID in -- according to doctors -- 24 hours."

When President Trump announced March 22nd that hydroxychloroquine could be a breakthrough breath of fresh air in curing CoVid, Gilead was left hanging in the proverbial wind with their Remdesivir drug that was believed to be the 'only' means of eradicating the virus. Gates is fully financially linked to Gilead.

Don't forget, Hydroxychloroquine is an anti-malaria drug in common distribution and relatively cheap. So did President Trump trump them further by discovering that an old school malaria drug would cure Covid in - according to doctors - 24 hours!? Thereby decimating their vaccine response and eradicating every single source of profit and income in this created pandemic?

ALL his plans for a pandemic billionaire convention hoard - have just been completely decimated!

But, as of April 30, the FDA has warned against using chloroquine or hydroxychloroquine for COVID-19 "outside of the hospital setting or a clinical trial due to risk of heart rhythm problems." The warning excepted FDA-approved use for malaria, lupus and rheumatoid arthritis.

An analysis submitted for publication in the New England Journal of Medicine detailed the two primary outcomes for patients with COVID-19 treated with hydroxychloroquine were death and the need for a ventilator.

The blog also claimed that Gates was losing money because the COVID-19 treatment drug he backed, remdesivir, was not successful. The problem with that assertion is that Gates does not own Gilead and is not an investor in the company.

Moreover, on April 29, 2020, Gilead announced that there was "positive data" about remdesivir's performance in a federal trial. Trump himself, as well as Dr. Anthony Fauci -- the director of the National Institute of Allergy and Infectious Diseases -- spoke about the "positive" results of the tests with remdesivir at the White House. Here is the video from C-SPAN:

The blog offers another way that Gates has supposedly lost money, citing Unitaid, an organization that the Bill & Melinda Gates Foundation helped establish in 2006. Yet, there is no evidence this organization lost any money.

The blog claims Unitaid "did nothing to mitigate against our current pandemic" -- a statement that Unitaid rebuts, revealing their actions during the COVID-19 pandemic.

Unitaid has moved quickly to reshape its programs to contribute to the global response to the COVID-19 pandemic.

Working with its partners, Unitaid has identified opportunities to collaborate for impact on fast molecular tests, clinical trials of medicines and vital devices to check patients' oxygen levels.

New opportunities are continually being explored to ensure that the needs of the most vulnerable populations are being addressed in a way that is fair and timely.

The blog ends with:

All this being said, try and imagine where we might be if even one of these Gates/Clinton agendas had succeeded? And imagine how freaking filled with rage they are for being thumped each and every time!!

Bill Gates has an estimated net worth of $102 billion, but he did lose an estimated $3.8 billion in early March when the stock market crashed amid the coronavirus outbreak.