Was a "Clinton Foundation Investigator" named Kenneth McCormick found dead? No, that's not true. The story was published by a liberal satire website that tries to mislead Trump supporters and Republicans into sharing made up stories that are clearly marked as satire when you actually click them. Articles from the site are frequently copied by foreign-run fake news websites. The people liking and sharing these stories are enriching foreign website operators or a liberal from Maine via the ad revenue generated with the content which is probably not what they expected or wanted.

The orginal story appeared as an article (archived here) on WeAreTheLLOD.com on March 30, 2020 under the title "Clinton Foundation Investigator Kenneth McCormick Found Dead". It opened:

The Clinton body count continues to grow. Clinton Foundation investigator and prosecutor Kenneth McCormick was found dead today in the driveway of his home in South Park, Colorado under extremely mysterious circumstances.

According to reliable sources in the Department of Justice, Mr. McCormick was in the final phase of his investigation into criminal activity by both Bill and Hillary Clinton and was about to indict the former president and first lady on federal crimes.

According to South Park police, McCormick was found by his next-door neighbors, Stan Marsh and Eric Cartman, laying decapitated in a pool of blood after having apparently committed suicide with a pair of cordless hedge clippers. Munching on a bag of Cheesy Poofs, Eric Cartman lamented the untimely demise of his neighbor and best friend.

Not only was the story published under a category named "CULINARY SATIRE FOR HUNGRY TATERS" on a page with several satire disclaimers but the story itself contained several references to the popular comedy series "South Park" which features a character named Kenneth "Kenny" McCormick who for several seasons died in every episode of the show as a running gag.

That didn't stop several foreign-run fake news sites from copying the story and spreading it in various Facebook group as if it was real news. For example, zonenews24.site managed to rack up over 24K engagements on Facebook with their version of the story: 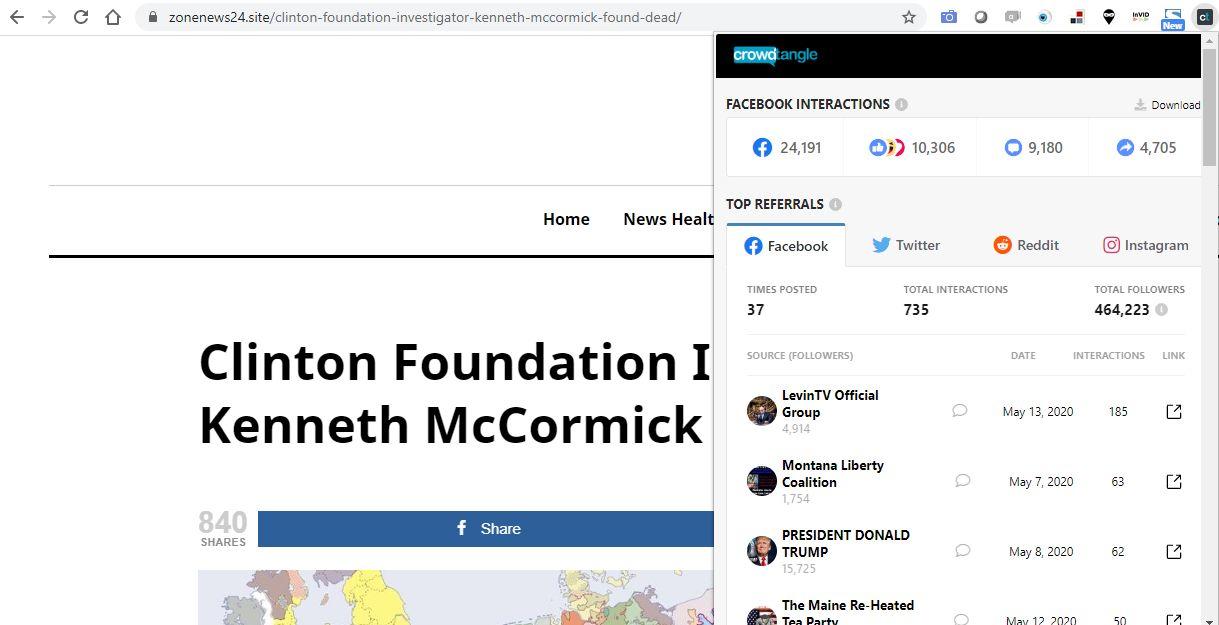 The site that orignally published the story is part of the "America's Last Line of Defense" network of satire websites run by self-professed liberal troll Christopher Blair from Maine along with a loose confederation of friends and allies. He runs several websites and Facebook pages with visible satire disclaimers everywhere. They mostly publish made-up stories with headlines specifically created to trigger Republicans, conservatives and evangelical Christians into angrily sharing or commenting on the story on Facebook without actually reading the full article, exposing them to mockery and ridicule by fans of the sites and pages.