Did Dr. Deborah Birx, the coronavirus response coordinator for the White House, have "a Freudian slip" and acknowledge that she actually works for billionaire philanthropist Bill Gates and the World Health Organization? No, that is not true: Birx, who appeared on CNN in April, did say the word "gates," but that was in reference to markers used for states to go through for certain processes, including testing and contact-tracing, for the novel coronavirus. She did not utter Gates' name, nor did she reference WHO during the town hall.

The claim is made in a video (archived here) posted to YouTube on April 22, 2020, titled, "Dr Birx Slips and admits she works for Gates and WHO". The text on the YouTube page reads:

Durin a CNN interview Dr. Birx has a Freudian slip and almost accidentally admits that she takes her orders from Bill Gates and the WHO"

On the 40-second YouTube video, posted by The Deus Vault, a text overlay reads across the top, quoting a question by CNN Chief Medical Correspondent Dr. Sanjay Gupta: "Do we have enough infrastructure to contact trace the way that we need to?"

Birx is then quoted as saying: "I think that's why the criteria that you can see the Gates-- that the federal government has recommended."

That is wrong. First, she didn't say "Bill Gates," and she was using the lingo of the administration with "gates," or markers, that need to be met for increased contact tracing by states.

Our review of the original video on CNN.com reveals this is what Dr. Birx said: "I think that's why the criteria that you can see, the gates, uh, that, that the federal government has recommended."

The video still below shows the video's claim: 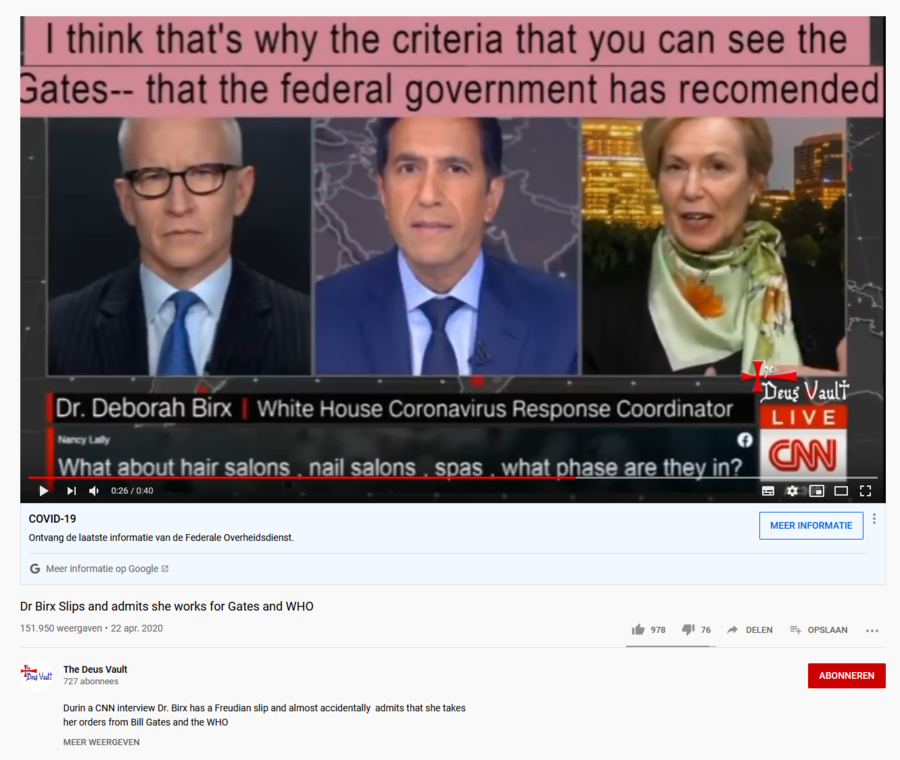 Here is the original April 16 CNN town hall with Birx, Gupta and CNN's Anderson Cooper. The exchange referenced is just two minutes into the video:

And here is a link to the town hall transcript, which is a first draft and does not contain the word "gates" nor the name "Gates."

Conspiracists have tried during the months of the COVID-19 pandemic to cast Gates, the co-founder of Microsoft who has given $300 million to fight the coronavirus, as some villainous person out to control humanity and depopulate the globe through controlling the virus and disease, using microchips implanted in people to track their health and other data -- and manipulate immune systems -- as well as forcing everyone to be vaccinated.

All of the claims about Gates -- as well as Birx supposedly admitting to working for him -- are false. They have been debunked in the past. Here is a list of some of our stories about Gates' alleged conspiracies to dominate the world and do evil to its population:

Fact Check: Italian Government Did NOT Call For Arrest Of Bill Gates On Charges Of 'Crimes Against Humanity'

Fact Check: Video Does NOT Reveal That Coronavirus Vaccine Was Patented By Bill Gates In 2006

Fact Check: Bill Gates, WHO & World Bank NOT 'Trumped' By President Amid Coronavirus

Fact Check: No Proof Is U.S. Planning to Force Vaccinations With Bill Gates Amid Coronavirus

Fact Check: Bill Gates Did NOT Write Open Letter Saying COVID-19 Reminds 'We Are All Equal'

Fact Check: NO Plan By Bill Gates And The Vatican To Depopulate World With Coronavirus Vaccine; Video Misinterprets Gates' Speech

Fake News: 'High-Level Exercise' Conducted 3 Months Ago Did NOT Show That A Coronavirus Pandemic Could Kill 65 Million People

Fake News: Bill Gates Did NOT Admit Vaccinations Are Intended To Reduce Population

Fake News: Melinda Gates Did NOT Say We Must Discriminate Against All White People