Did President Trump send out a tweet that included the phrase "Oldies will have to die" in connection with lifting coronavirus restrictions? No, that's not true: the claim originated on a satire website but was widely picked up on Twitter and presented as real by several people. A search of Trump's recent tweets did not show any that contained the phrase.

The fake tweet originated from an article published in the satire section "Laughing in Disbelief" of Patheos.com on May 8, 2020 titled "'Oldies Will Have To Die' Tweets Trump" (archived here) which contained a fake tweet that read:

American shops want to open! Hair needs cutting, Demohaps don't want to bite the bullet but that's the price we have to pay, Some oldies will have to die, We're in God's hands folks! L'berate America! 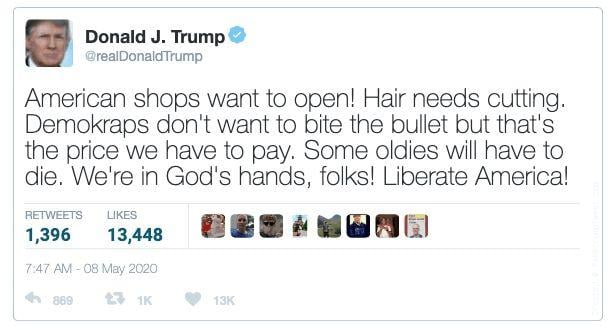 However a search for the phrase "oldies will have to die" on the Trump Twitter archive yielded no results, nor did a search of his account via Twitter's own search page and the tweet was also not visible in the Internet Archive when a snapshot was taken of Trump's account on May 9, 2020 shortly after midnight.

The link to the supposed tweet in the Patheos article actually went to a page that explained it was all satire:

Hello, my name is Andrew Hall and I'm the author of Laughing in Disbelief. Before getting to business I just want to thank you for taking some time and reading one of my posts. I appreciate it!

You probably clicked a link to a story and you're here.

The story you were reading is satirical.

NewsGuard, a company that uses trained journalist to rank the reliability of websites, describes patheos.com as:

A website that publishes hundreds of blogs on religion, politics, and health, including unlabeled satirical articles and blogs that misstate facts to advance the author's views.