Did Antifa issue a warning to the Hells Angels biker gang to "watch out we are coming to Sturgis"? No, that's not true: A screenshot of an Antifa Facebook group featuring a banner reading "ANTIFA AGAINST BIKERS" was digitally altered. The Facebook group does not include any such threats against bikers.

The claim appeared in a widely-shared meme, including a post (archived here) shared on June 13, 2020, under the title "NOT SMART." It opened:

You've got to be a special kind of f**king retarded to call out Hell's Angels, Pagans and Outlaws..........

Under the photo, the text read:

"Sturgis" is apparently a reference to the Sturgis Motorcycle Rally set for the second week of August in Sturgis, South Dakota. The annual event usually attracts about 500,000 bikers, including more than a few members of motorcycle clubs such as the Hells Angels.

This is the faked screenshot: 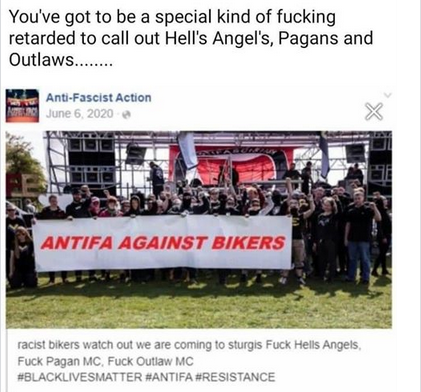 The original photo features a banner that reads "FREE ALL ANTIFA PRISONERS." It can be found on a webpage promoting the International Day of Solidarity with Antifascist on July 25, 2015. 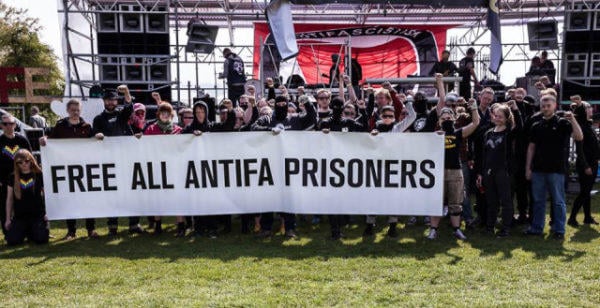 Lead Stories reached out to the one of the admins of the Facebook group "Anti-Facist Action", the purported source of the post. He clarified:

Thank you for reaching out. I've included what we believe to be the original image. (ed.: it was the same image already identified by Lead Stories)
Anti-Fascist Action does not allow these types of posts. Also, one cannot post an image or comment as "Anti-Fascist Action", all comments or posts come from individuals. The admins adhere to the principles of equality and consider our biggest weapon to be solidarity, mutual aid and love for human rights.

Also, this group has been in existence on Facebook for around 10 years. I have been the admin for 9 of those years. Until recently, we have not received very much attention, especially negative attention. While we are intimately familiar with the tactics of the fascists, this type of slander has brought about numerous death threats, rape threats, etc. Quite frankly, it's disgusting. It should be duly noted, we are NOT going anywhere. Much love.

Antifa has been the frequent target of faked photos and hoaxes. Here are several recent Lead Stories articles debunking them: