Did CNN lighten the photo of the man who drove into a protester in Seattle and claim he was white? No, that's not true: There is no evidence that CNN used any form of an image showing the attacker's face lightened in their reporting. The CNN logo on the image is not the same logo currently used by CNN. The image is not found on CNN.com. A reverse image search of the image in the meme only points back to the meme which was circulated on social media with no public disclosure of authorship.

The claim appears to have originated on Facebook as a post (archived here) where it was published by 'The insanity of liberalism' on June 11, 2020. The caption in the meme read:

CNN lightened the photo of the man who drove into the protester last night in Seattle. They said he was white.. Ck out the real photo. OK.. do you understand they are just getting everyone riled up with LIES..

The shooting incident happened in Seattle on the evening of Sunday June 7, 2020 during the protests over the death of George Floyd. It was reported by the Seattle Times (here) (archived here) which had photographers and reporters in the area to cover the protests and they recorded the events live as they unfolded. They captured photos and also livestreamed video. A summary of the Seattle Times' protest coverage for June 7 can be found (here) (archived here). One of the staff photographers present was Dean Rutz, his photos of the gunman are featured in the Seattle Times article. One of these photos was used to make this meme. 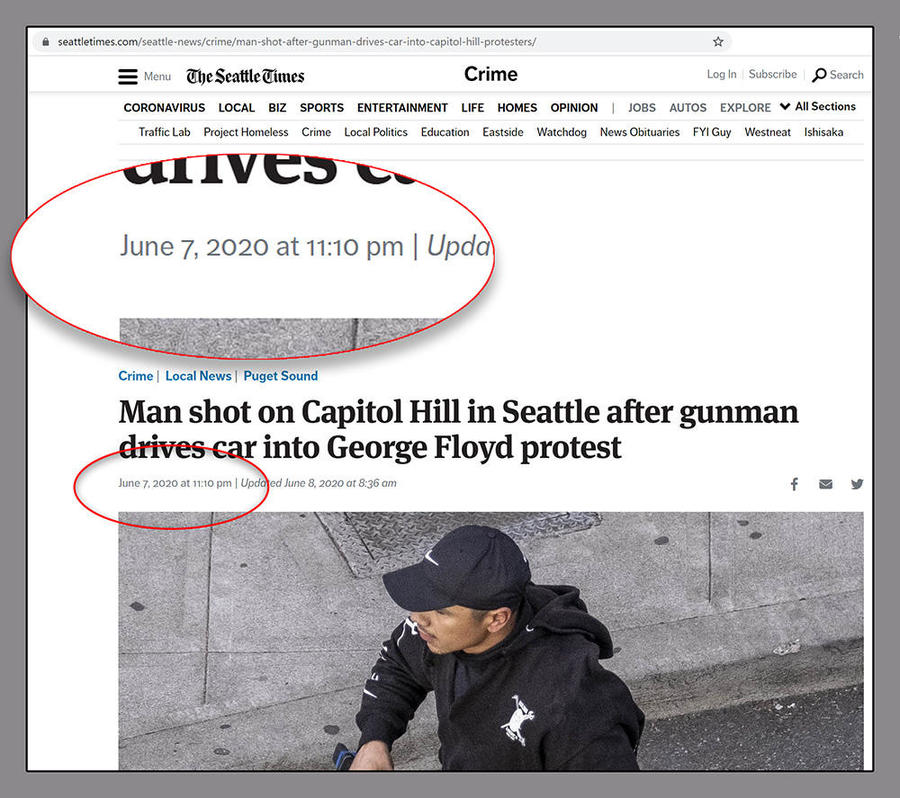 CNN's online coverage of this incident titled, "A person was shot after a man drove a vehicle into protesters, Seattle police say", (here) (archived here) was illustrated with a Getty photo of a memorial in Seattle lit with candles. 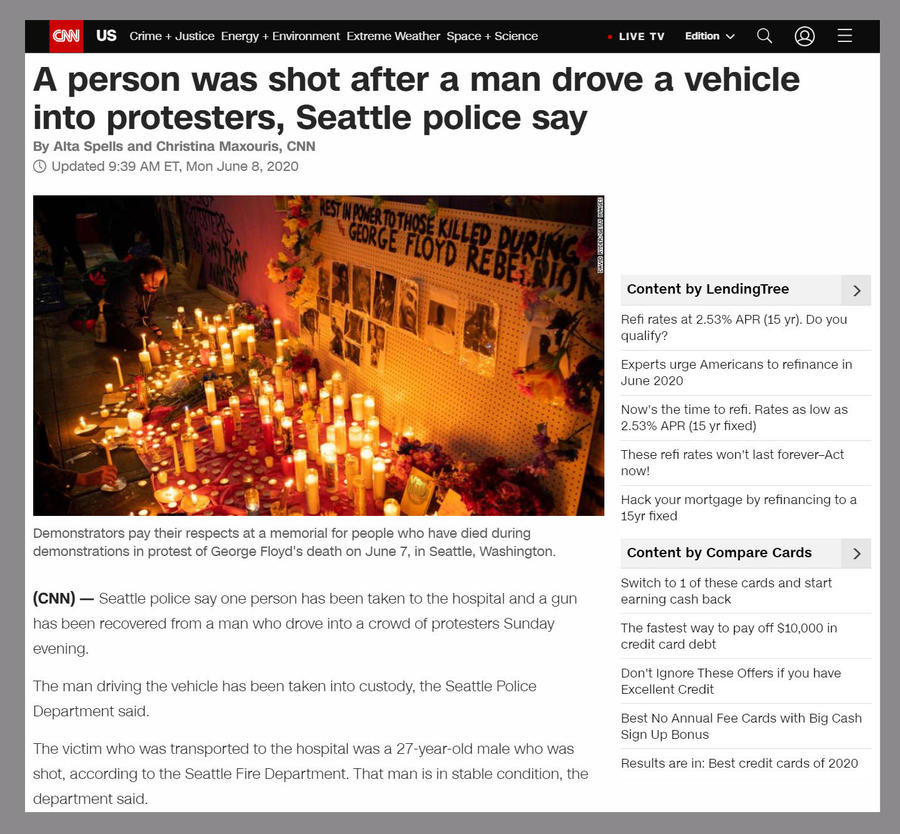 CNN has a running summary of daily protest coverage -- but no mention of this shooting which happened in Seattle appears in the summary (here)(archived here) for Sunday June 7, 2020.

CNN also published a slideshow of photos on June 12, titled, "The week in 41 photos" (here) (archived here). This slideshow includes one photo of the June 7th incident which came from Reuters. It is not the photo used in the meme and it has not had its color altered. For reference, Reuters published a slideshow of this scene on June 10, 2020 titled "A shooting in Seattle" (here) (archived here).

The CNN logo has several variations. In the website design pictured above, the logo appearing in the black banner has white letters on a red square field. On the YouTube channel (here) avatar features white letters on a red circle. There are two presentations of the logo on videos, either red letters with no background, or red letters over a white field. This is the same presentation that would be televised. The logo that appears in the meme would never appear on top of a photo or video according to CNN's current graphic design convention.

The image below shows as an example of which CNN logos currently appear over videos. The video pictured in this example is unrelated to the incident in Seattle. 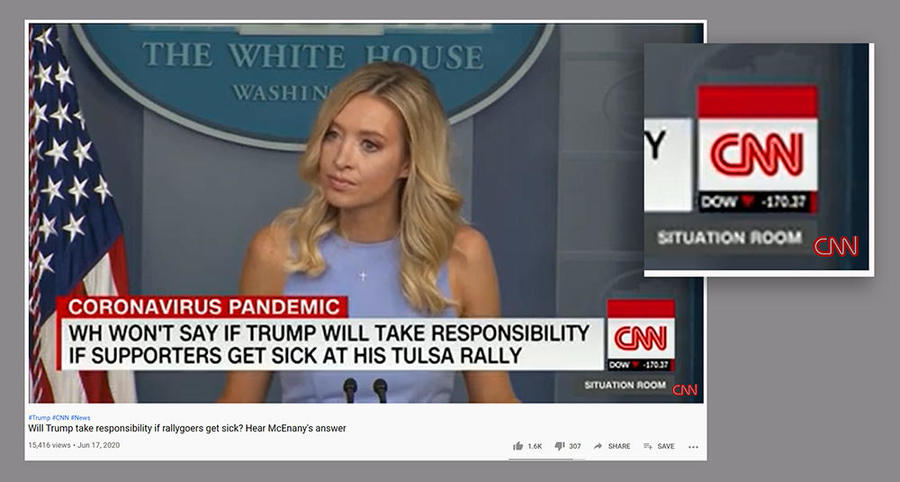 According to the social media analytics tool CrowdTangle, the earliest example of this meme was posted to the Facebook page 'The insanity of liberalism' on June 11, 2020 at 2:52 PM. The page transparency information provided by Facebook shows the page was started on January 29, 2018 and is managed by someone located in the United Kingdom.

There was a delay of four days between when the incident happened in Seattle and when this meme appeared on Facebook.

The meme surfaced on Instagram the next day, posted twice by the person who runs the accounts thedominator2016 and dominator_1776. Both of these posts had the same self-promotional captioning:

Courtesy of @slasherstorian IF true this is criminal incitement for a race war! Follow me at @thedominator2016 and dominator_1776

These posts had tagging from @hgcmedia included in the grey frame of the screenshot. About 50% of the instances of this meme on instagram bear the tag from @hgcmedia. The hgcmedia post was also made on June 12, 2020. 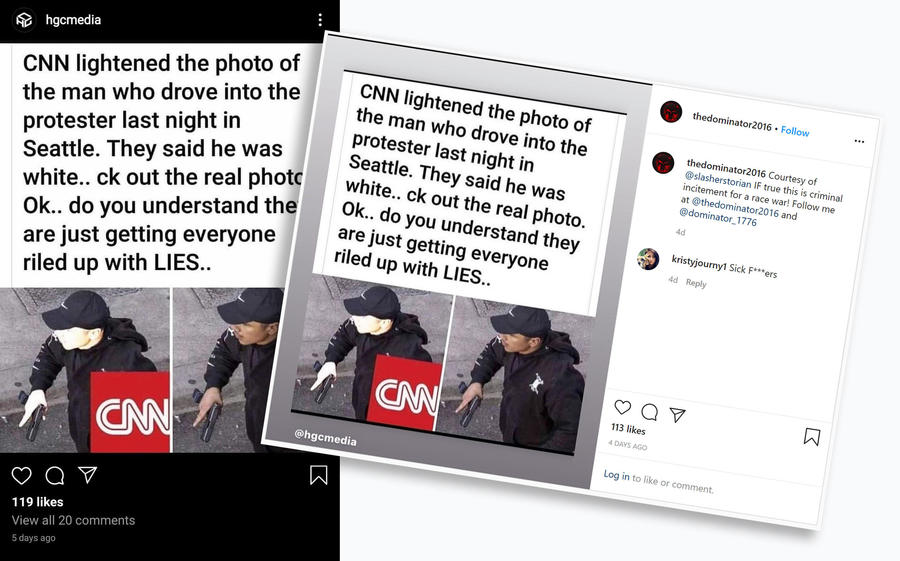 This is not the first time Lead Stories has looked into a false claim about CNN altering an image to change a person's skin color. We recently covered a similar false meme (here): "Fact Check: CNN Did NOT Put A Black Guy's Head On A Lily White Dude" 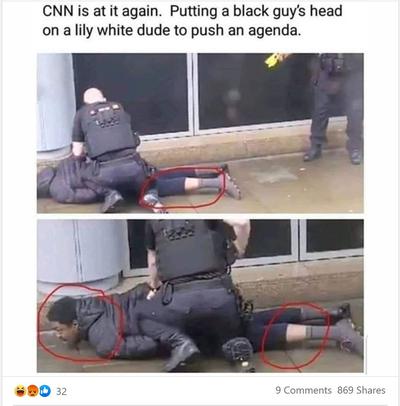