Did Whoopi Goldberg say "Maybe it's time for me" to leave the U.S. in June 2020? No, that's misleading: Goldberg did say something similar to this, but that was over four years ago, on January 20, 2016, months before the 2016 election. Newly published copycat articles that imply those were recent remarks are deceptive.

One example of a recently published copycat article came from dailypoliticalnews.info on June 8, 2020, titled "Whoopi Goldberg: 'Maybe it's time for me' to leave the U.S." (archived here). According to whois.com online identity records, the website is registered in Macedonia. The peculiar wording of this article is due to the copied text being run through an "article spinner" that will help avoid plagiarism detection programs. The article opened:

'The View' co-have Whoopi Goldberg on Wednesday said a conceivable Donald Trump administration flags that 'possibly now is the right time' for her to move out of the nation.

Ms. Goldberg was reacting to a case by individual co-have Joy Behar that the Republican presidential leader 'has a lot of Democratic propensities on the off chance that you see his record.' 'Tune in, he can be whatever party he needs to be,' Ms. Goldberg contributed, as indicated by a clasp gotten by Breitbart News.

'What he can't be is he can't be the person that says it's your blame stuff isn't working. That is not the president I need. Figure out how to make stuff function.' 'Be that as it may, you can't state, "Goodness, you're Lebanese or you're dark or you're Mexican or you're a lady." Stop accusing

How about we fix the poo. Allows simply fix it,' she proceeded. 'Furthermore, in the event that you can fix it, I will tune in to what you need to state.

That garbled text was legible when it originated (here)(archived here), in an article in The Washington Times. It was published on January 21, 2016. It was titled, "Whoopi Goldberg: 'Maybe it's time for me' to leave the U.S." and began:

'The View' co-host Whoopi Goldberg on Wednesday said a possible Donald Trump presidency signals that 'maybe it's time' for her to move out of the country.

Ms. Goldberg was responding to a claim by fellow co-host Joy Behar that the Republican presidential front-runner 'has a lot of Democratic tendencies, if you look at his record.'

'Listen, he can be whatever party he wants to be,' Ms. Goldberg interjected, according to a clip obtained by Breitbart News. 'What he can't be is he can't be the guy that says it's your fault stuff isn't working. That's not the president I want. Find a way to make stuff work.'

The Washington Times refers to an article published by Breitbart (here) (archived here) the day before, on January 20, 2016. This article is filed in the "clips" section of the Breitbart website, where embedded video clips provide the foundation of the article summary. The article is titled, '"Whoopi Threatens to Leave U.S. Over Trump: 'You Can't Blame Immigrants' for Country's Problems," but the article does not contain the video from that edition of "The View." The video also does not appear to exist in program's YouTube channel archive. This caption taken from the Breitbart article picks up where the above excerpt leaves off:

Stop blaming everybody because all of this, as American citizens, this is our -- we did all of this. We've allowed all this stuff, so we have to fix it. But you can't say, 'Oh, you're Lebanese or you're black or you're Mexican or you're a woman.' Stop blaming everybody. Let's fix the crap. Let's just fix it. If you can fix it, I will listen to what you have to say. The minute you start pointing and saying that person is a rapist and a murderer, it pisses me off because I've been part of that when they just use a blanket statement to talk about black people or when they use a blanket statement to talk about white people or women or any other group. I don't think that's America. I don't want it to be America. Maybe it's time for me to move, you know.

'I can afford to go,' she added. 'I've always been an American, and this has always been my country and we've always been able to have discussions. And suddenly now it's turning into, you know, not them, not them. And you know, we have a lot of friends whose parents saw this already. They don't want to relive this ... So I need all the candidates to get it together. Get back to American values."

Express.co.uk published a video clip on January 21, 2016, titled, "Whoopi Goldberg Threatens to Leave America Over Donald Trump - Can't Blame Immigrants for Problems." This video (here)(archived here) is an almost 5-minute clip from this conversation on "The View." The part where Whoopi Goldberg says, "Maybe it is time for me to move," happens about two minutes in.

Users on social media only saw this title, description and thumbnail for the dailypoliticalnews.info June 8, 2020, post:

Whoopi Goldberg: 'Maybe it's time for me' to leave the U.S.

Loading... "The View" co-have Whoopi Goldberg on Wednesday said a conceivable Donald Trump administration flags that "possibly now is the right time" for her to move out of the nation.Ms. Goldberg was reacting to a case by individual co-have Joy Behar that the Republican presidential leader "has a lot of Democratic propensities on the off [...]

These bogus publishers who copy and republish the articles over and over typically have many methods to game for traffic. They are frequently banned from platforms, hosting providers, and ad services. They make new websites to replace ones that have worn out their welcome. One common trick is to post redirecting links on the social media platforms, this makes it so the platforms can not ban the source website as the traffic is linked indirectly. These redirecting sites can be blogs, google.sites, tumblr, even pinterest has been used to indirectly route webtraffic off Facebook.

Here is an example of two fake profiles that are mocked up to look like American people, (archived here and here) The profile URLs bear the names of the original owners of the accounts that do not match the usernames. They are spamming links into American politics groups and these links point to a Tumblr account which is hosting the dailypoliticalnews.info website. 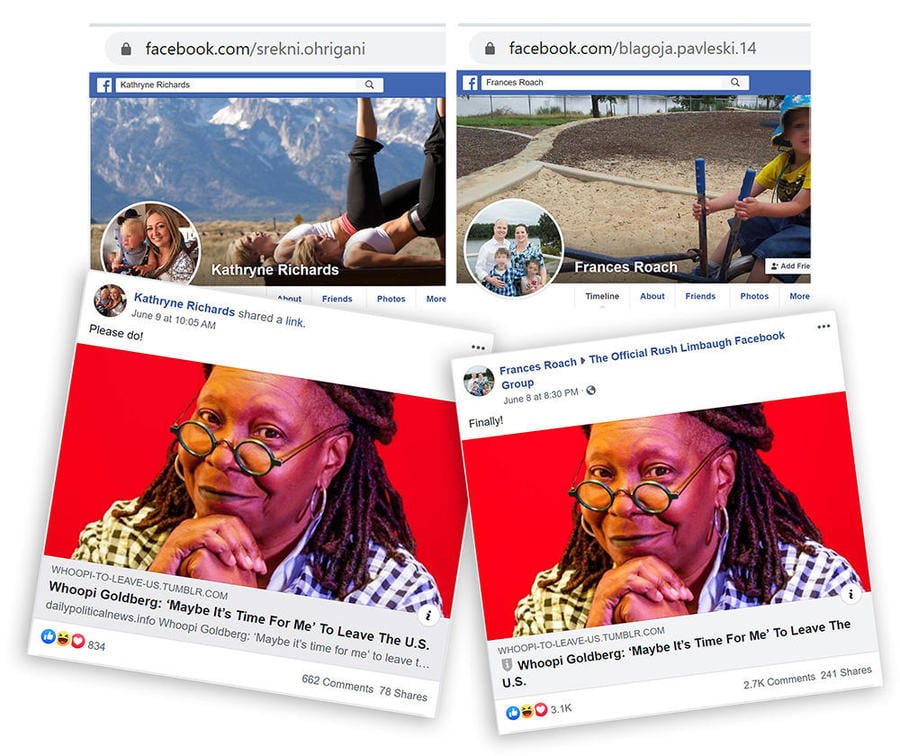 NewsGuard, a company that uses trained journalist to rank the reliability of websites, describes dailypoliticalnews.info as:

An anonymously run website registered in Macedonia that has repeatedly published false information and routinely copies articles from other sites without credit.

This is not the first time we have seen a View video missing from a Breitbart article, or a foreign publisher spin and republish the story for years. Lead Stories explained an almost identical situation in this article: Fact Check: Sheryl Crow Did NOT Say, 'I Forbid My Kids To Watch TV When Trump Is On, I Prefer Classy People Like Hillary Clinton.

Lead Stories has a humorous in-depth look at article spinning in this analysis article: 'Invoice Barr' and the 'Second Modification': How Article Spinning Works.