Are bluegill one of the most dangerous fish in North America, related to piranhas and responsible for 500 deaths in the USA annualy? No, that's not true: Bluegill are not related to piranahs and they don't attack people.

The claim reappeared in a post (archived here) where it was published by Crystal Bast on July 26, 2020. The only caption was a scream emoji😱 The meme read:

The Bluegill fish is one of the most dangerous fish in North America. The bluegill is related to the deadly piranna which is responsible for 20,000 deaths per year. When the bluegill are feeding in a school, they can dismantle a human body in less than 15 minutes. Bluegills are responsible for over 500 deaths in the United States every summer. 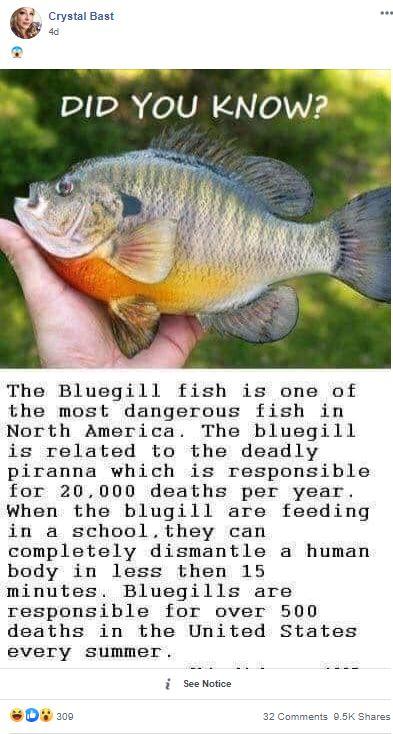 This meme circulated in 2018 and has resurfaced again in the summer of 2020. There are many claims packed in this short paragraph. We will look at them one at a time.

Bluegill is a freshwater fish native to North America, and usually measures 5-to-7 inches. A footlong bluegill would be one to write home about. The bluegill's small size may have contributed to the one fatality we could find recorded.The Journal of Forensic Medicine and Pathology (here)(archived here) reported a man who was choked to death by swallowing a bluegill whole in 1989, but it would not be fair to count that against the bluegill.

If the bluegill is not the most dangerous freshwater fish in North America, which fish would claim that title? The bull shark is the most likely candidate as they can live in both salt and freshwater and have traveled up rivers far from the ocean. These sharks have been responsible for attacking and killing many people around the world. The last fatal bull shark attack in the USA which did not happen in ocean water, was in 1916 in the Matawan Creek in New Jersey. The Florida Museum keeps the International Shark Attack File where you can view an (interactive map). The ISAF species profile (here)(archived here) of the bull shark says they may be the most dangerous shark in the world:

According to the International Shark Attack File (ISAF), bull sharks are historically responsible for at least 100 unprovoked attacks on humans around the world, 27 of which have been fatal. However, it is likely that this species may be responsible for many more. It is considered by many to be the most dangerous shark in the world. It's large size, proclivity for freshwater, abundance and proximity to human populations, particularly in the tropics, makes it more of a potential threat than is either the White shark or the Tiger shark. Since the bull shark occurs in several underdeveloped regions of the world including Central America, Mexico, India, East and West Africa, the Middle East, Southeast Asia, and the South Pacific, bites often go unreported. The Bull shark is also not as readily identified as is the white shark or the tiger shark, and so may be responsible for a large fraction of the attacks that go unassigned to species (ISAF 2018).

The claim that the bluegill is related to the deadly piranha is also false. The piranha is a member of the Serrasalminae sub family of Characidae within the order Characiformes, tetras. The classification of piranhas is very complex and still being studied. A 2007 paper published in the peer-reviewed animal taxonomy journal Zootaxa, titled "Molecular systematics of Serrasalmidae: Deciphering the identities of piranha species and unraveling their evolutionary histories" (here)(archived here) discusses the complexity of mapping the relationships.

One relationship not in question is that of the bluegill, who is a member of the Centrarchidae family: sunfish, of the order Perciformes. Piranha and bluegill are both freshwater fish but their natural territories do not overlap and they are not related.

The claim that the piranha is responsible for 20,000 deaths per year is not true. While piranhas have a legendary reputation for mass feeding frenzies which can reduce unfortunate creatures to nothing but some bones in minutes should they try to swim across piranha infested waters, it turns out this legend is also overblown.

There are very few reports of people who have been killed by piranhas. When human bodies are discovered that show evidence of piranhas feeding, it can be hard to determine if the person was alive when the piranhas began feeding or if the person had drowned. When living people are attacked by piranhas, it tends to be a non-lethal bite to the feet or hands.

The website Piranha Guide, which is dedicated to the world of the piranha and aquarium piranha keeping, published an article May 5, 2019 (here)(archived here) titled, "A Documented List Of All Known Piranha Attacks [Piranha Victims]" Each of the incidents mentioned includes a link to the news article reporting the incident. In summarizing their findings, Piranha Guide has not found even one confirmed case of a living human being killed by piranha. They conclude:

There have been no cases of attacks on living humans. Humans have died, but no-one can directly attribute the Piranha as the cause of death. There have always been other contributing factors or people have just suffered wounds.

The only attacks reported consist of bites on the toes, ankles, and hands of the victims. Most people who are found dead after a Piranha attack could have died from drowning in the rivers.

Nobody has ever been attacked alive when they swim in Piranha-infested waters. Piranha do not attack large animals, as they are a shy fish and think of large animals as predators.

Another false claim is that bluegill can dismantle a human body in less than 15 minutes when feeding in a school. If piranhas are not responsible for 20,000 or even 500 human deaths certainly the bluegill is not killing and dismantling people while they swim. Bluegill will eat insects, worms and smaller fish, tadpoles, fish eggs, crayfish, water bugs, basically little things they can fit in their mouth. They would not attack a person.

If not bluegill, could piranhas do that? This article from HowStuffWorks, "Can piranhas really strip a cow to the bone in under a minute?" (here)(archived here) does explain the backstory of a famous and true feeding frenzy legend:

Roosevelt explored the exotic Brazilian Amazon as an avid hunter, but he wasn't exactly the common tourist. He was a former U.S. president, and his guides wanted him to be very pleased with his trip. But what he saw was real: piranhas stripping a cow to the bone in a shockingly short period of time. Whether it was really under a minute, we'll never know. But we do know that this type of attack is feasible for piranhas. What Roosevelt witnessed had some special circumstances, which we'll get to later. Nonetheless, it was a disturbing sight, considering the size of these fish. 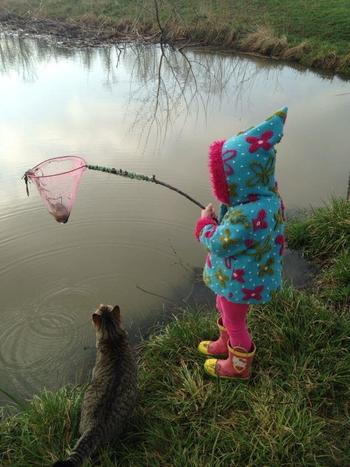 Photo by author/ Catching 3 Bluegill at Once (With Cheerios)