Is an Orlando television station's report -- that a motorcycle fatality got counted as a COVID death -- correct? No, it's not: Orange County, Florida's data correctly lists the motorcyclist, who had tested positive for COVID-19, in the tally for motor vehicle accidents.

A public health official, who FOX35 recorded saying he did not know whether or not the motorcyclist's death was included in the COVID-19 tally, is not the person who determines cause of death and state and federal officials say that death did not get added to the state's total number of deaths.

The claim appeared in a video news report (archived here) published by FOX35 (Orlando, Florida) under the title "Questions raised after fatal motorcycle crash listed as COVID-19 death." It opened:

We start with big breaking news tonight questioning the coronavirus numbers and uncovering a shocking revelation.

This is what the story looked like on July 20, the day Lead Stories wrote this report. 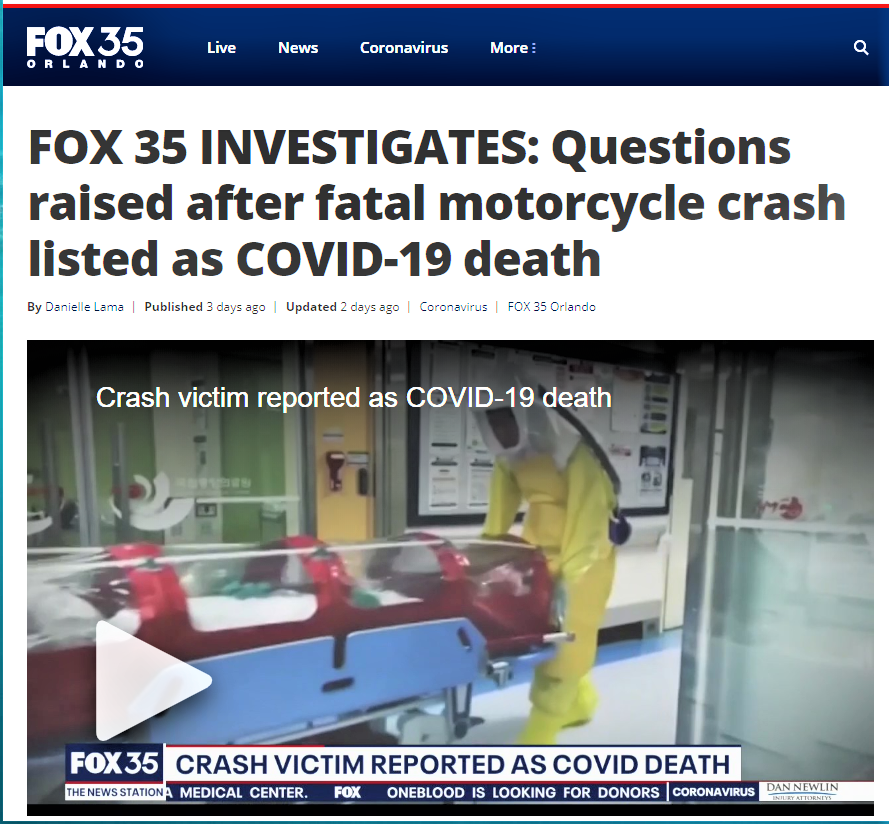 As in any verified real-time national tally of human phenomena (like elections, births or tax revenues) the U.S. Centers for Disease Control and Prevention are careful to call the COVID-19 tally "provisional" and to note it has a recounting and verification process that catches clerical errors and deaths that belong in other categories, for instance. The numbers will slightly change as corrections are needed. More inaccurate would be a locked-down system that did not include corrections to a day-by-day tally, which is guaranteed to need occasional revision as new information is gathered.

The false claim - that a crash victim was reported as a COVID death - has continued to spread, with Florida Governor Ron DeSantis repeating FOX35's claim, as seen at two minutes and 52 seconds into this NBC6SouthFlorida video news report which aired July 20, 2020.

Responding to Lead Stories' questions about the claim, Dr. Joshua Stephany, Chief Medical Examiner for Orange County, Florida, noted that he and his fellow medical examiners, not the Department of Health, (the source relied on in FOX35's report) determine cause of death. Stephany said the crash victim's death never got reported as a COVID-19 death in certified death data:

If a person has trauma and dies directly from that trauma, the cause of death will be due to the trauma regardless of COVID-19 status. We do not contribute it towards the cause of death as was the case in question in the news report.

If someone has trauma and suffers chronic debilitating illness, and contracts pneumonia of any kind we will contribute it towards the cause of the death. This was NOT what happened in the case in the news report, therefore we did not contribute COVID-19 to the cause of death.

The video story by reporter Danielle Lama suggested a problem and declared a public health official had said the motorcyclist's death was mis-reported:

County health officer Dr Raul Pino telling us a person reported to have died from COVID was killed in a motorcycle accident. So was it removed from the data?

In the video version of the story, Dr. Pino did not give a definitive answer. "I don't think so. I have to double-check," the Florida Department of Health officer for Orange County, tells the reporter about one minute and 29 seconds into the online version of the video story. Pino notes that with Orange County's daily death toll hovering at 100 on that day, a 1% adjustment isn't significant.

We were arguing, discussing, or trying to argue with the state," he says of the motorcyclist's inclusion in the total. "Not because of the numbers - I mean, it's 100...it doesn't make any difference if it's 99 -- but the validity that the fact that the individual didn't have, didn't die from COVID-19...I don't know the conclusion of that one.

FOX35, which hyped its report as "Big Breaking News" updates its news reports in an almost identical fashion to the way official databases like this are updated: revising to reflect new evidence. FOX35 has, since the original report, added several sentences that made clear the COVID-positive motorcylcist's death in a wreck was not in the official tally of Orange County COVID-19 deaths.

Robert N. Anderson, Ph.D., chief of the Centers for Disease Control and Prevention's death statistics branch said it is important to understand U.S. deaths are reported in two streams of data: the quicky tally in the "case surveillance" stream and the slower death certificate stream.

Available to FOX35 at the time it was producing its story was this Centers for Disease Control and Prevention explanation of the process of producing daily statistics and adjusting them if clerical or categorical corrections are needed:

The provisional counts for coronavirus disease 2019 (COVID-19) deaths are based on a current flow of mortality data in the National Vital Statistics System... It is important to note that it can take several weeks for death records to be submitted to National Center for Health Statistics (NCHS), processed, coded, and tabulated. Therefore, the data shown on this page may be incomplete, and will likely not include all deaths that occurred during a given time period, especially for the more recent time periods. Death counts for earlier weeks are continually revised and may increase or decrease as new and updated death certificate data are received from the states by NCHS.

That system of updating reports with new information is similar to the "Updates" approach FOX35 uses on it's own news reports. On this screen-grab, Lead Stories circled the original publication date in dark green and the station's note that the story has been updated in light green: 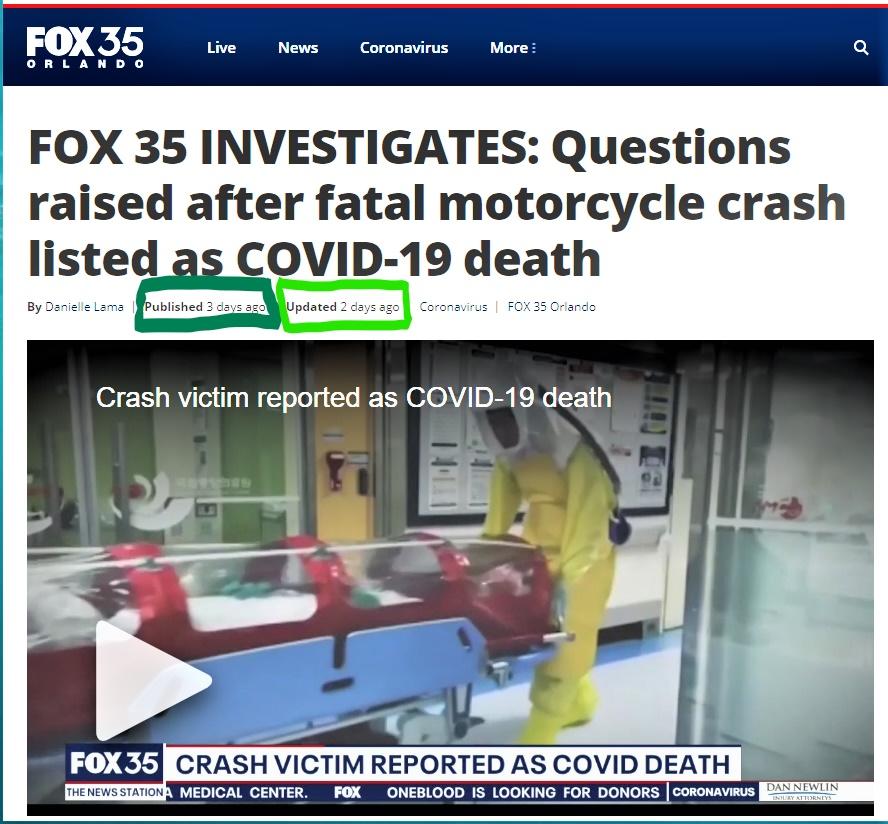 Lead Stories took a July 20, 2020 screengrab (see below) of the text version of the story, which notes the death is NOT reported as a COVID death. The update to the story is in bold (highlighting added by Lead Stories) and appears above the older version. Both appear below the video version of the story, which includes large title panels declaring the motorcylce crash victim IS reported as a COVID death. 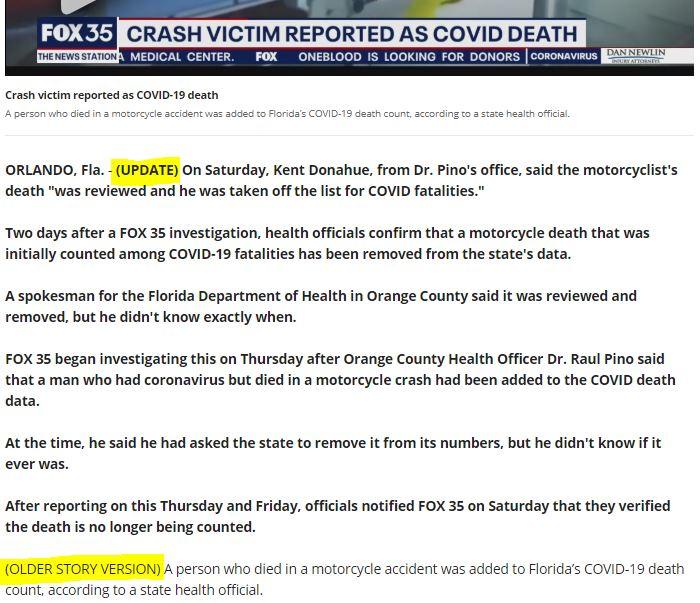 NewsGuard, a company that uses trained journalist to rank the reliability of websites, describes fox35orlando.com as:

The website for WOFL-TV, a Fox affiliate that serves Orlando and surrounding communities in Florida.

In the opening seconds of FOX35's video version of the story about the motorcyclist's death, reporter Danielle Lama speaks over what sounds like a motorcycle revving as it upshifts. Lead Stories reached out to FOX35 to learn if that sound was recorded elsewhere and edited into the audio tracks of the story, which would violate journalistic ethics rules concerning manipulation of audio. Victoria Gurrieri, Corporate Communications Manager for FOX television stations said the sound was authentic traffic noise Lama had to speak over during her live outdoor stand-up.