Were Texas and other states ordered by the Centers for Disease Control and Prevention, and the World Health Organization to fraudulently increase by 15-fold the tally of COVID-19 cases? No, that's not true. The CDC gathers data based on the non-binding suggestions of the Council of State and Territorial Epidemiologists. Aside from that, Texas Department of State Health Services data show no 15-fold increase in reported cases in Collin County, which used as the basis for the claim.

The claim originated in a video and article (archived here) published by The Alex Jones Show on June 29, 2020, on the banned.video channel under the title "Breaking: States Ordered To Fraudulently Inflate COVID-19 Cases 15 Times Actual Rate." The video opened with a clip from what Jones dated as a May 18, 2020, public meeting of Collin County Commissioners Court in which officials explained changes in the way "probable" cases of COVID-19 are counted. Jones came out of the clip saying:

This is complete proof that the covid19 testing regime and the definitions they semantically use from the NIH and CDC are frauds. This has been confirmed. If one person tests positive for COVID 19, fifteen people in the computer model are then said to have it.

The Council of State and Territorial Epidemiologists did send states new COVID-19 case-counting guidelines in May that directed public health officials to help chart the spread of COVID-19 by listing both confirmed cases and probable cases. That change reflected what field epidemiologists had noted, that people were spreading the contagion before they knew they were carriers and disease fighters needed an earlier warning.

Rather than wait for confirmed cases to show up, the epidemiologists urged public health officials to include in the count anyone for whom COVID-19 was the most likely explanation for symptoms such as high fever, respiratory difficulty and taste disorders. That way, CDC mapping would give public health officials advance notice where the contagion was moving, allowing time to warn the public to avoid events and venues where contagion spreads.

But the guidelines are non-binding and The Washington Post reported June 8, 2020, that less than half of all U.S. states had adopted the new tally, including large states such as California, Florida and New York.

Texas did adopt the new reporting scheme, but there has been no 15-fold rise in the number of cases there, according to these Texas data graphed by The New York Times, showing the July 3 total and the total at the time the new reporting rules were put into effect. The change over that period has been from 960 cases to 7,158, a seven-fold increase during a period when CDC data show the U.S. case total has doubled. Searching U.S. case data and state data, Lead Stories was not able to locate any instance of the 15-fold increase in reported cases referred to in Jones' claim. 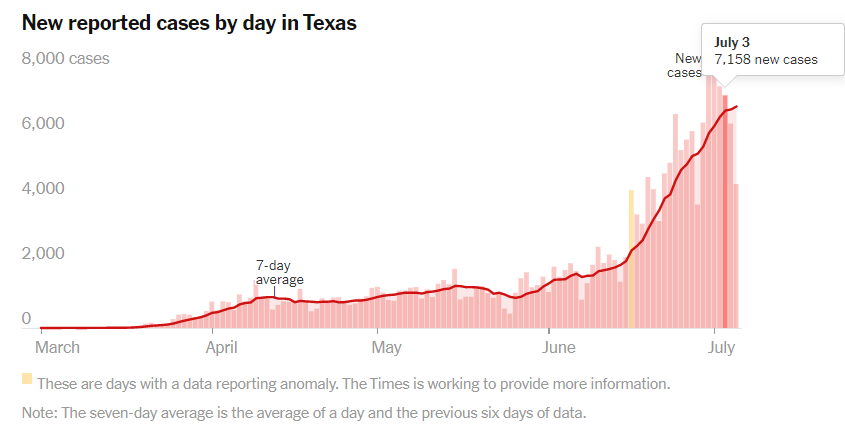 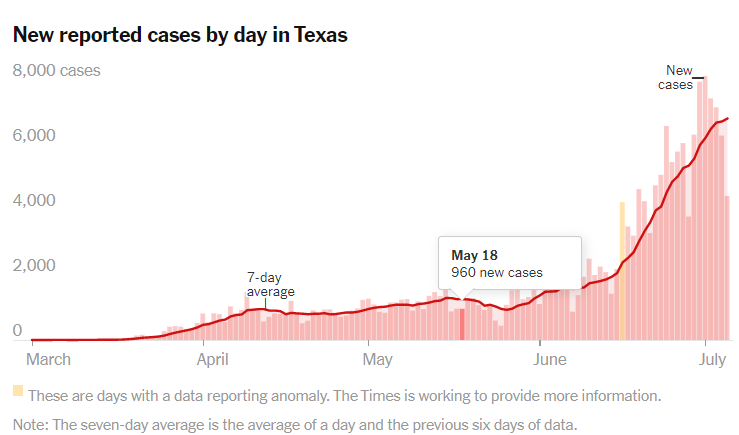 Here's how the Council of State and Territorial Epidemiologists explained their proposal to start counting probable cases along with confirmed cases:

Here are the rules for counting suspected or probable cases, adopted April 5, 2020, and circulated for state approval:

In cases where a definite diagnosis of COVID-19 cannot be made, but it is suspected or likely (e.g., the circumstances are compelling within a reasonable degree of certainty), it is acceptable to report COVID-19 on a death certificate as "probable" or "presumed." In these instances, certifiers should use their best clinical judgement in determining if a COVID-19 infection was likely. However, please note that testing for COVID-19 should be conducted whenever possible.

Clinical Criteria: At least two of the following symptoms:

OR
At least one of the following symptoms:

OR
Severe respiratory illness with at least one of the following:

AND
No alternative more likely diagnosis.

For this report, Lead Stories reached out to the office of Texas Gov. Greg Abbott, Texas Department of State Health Services, Collin County Public Health District, Centers for Disease Control and Prevention and to the epidemiologist who drafted the new guidelines for the Council of State and Territorial Epidemiologists. This story will be updated as needed when they reply.