Do 800,000 kids vanish every year in the United States? No, that's not true: The FBI noted it had 421,394 reports of missing children to the NCIC Missing Person Database in 2019 but over that time around 400,000 records for missing juveniles were added and removed, indicating the vast majority are fortunately located again. Only 4,828 of the total number -- or roughly 1% -- were marked as missing under circumstances indicating that the "disappearance may not have been voluntary; i.e., abduction/kidnapping," according to the FBI.

2000 children go missing PER DAY in the U.S. alone. That's 800,000 kids vanished every year. Being a parent and knowing that statistic or even thinking about what those poor children must experience is horrific.

Reports of missing children are upsetting, no matter the number. But the post's claim is exaggerated.

According to the full report, there were 421,394 reports of missing children in the database in 2019.

Here is a chart from the FBI that shows the breakdown that number: 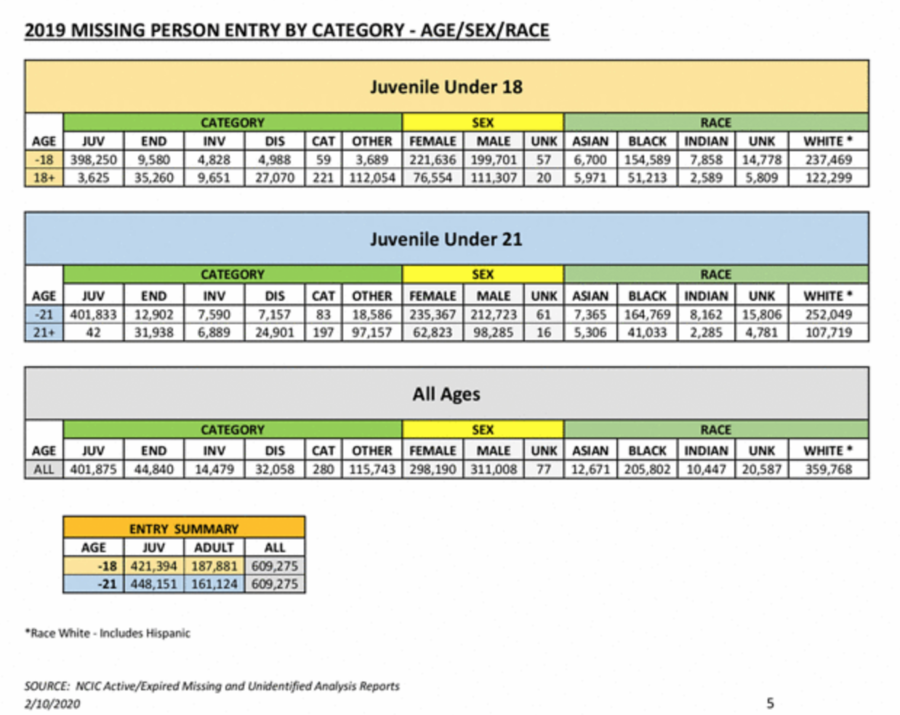 On page 4 of the report it is noted that over 401,674 of these records were purged in 2019 and 401,875 were added. That would seem to suggest most cases are solved because records are only purged if "a missing individual is located or the reporting agency cancels the entry".

There are two additional caveats to trying to determine an annual number for missing children.

One, the official number from the FBI represents reports of missing children. That means if a child runs away multiple times in a year (and is reported), each instance would count as a separate entry, according to the National Center for Missing & Exploited Children (NCMEC).

Two, some missing children are never reported to law enforcement. Because of this, the center says "there is no reliable way to determine the total number of children who are actually missing in the U.S."

That may be true. But it is also true that it's inaccurate to say that 800,000 children vanish each year in the U.S. Again, according to the best available data, there were 421,394 reports of missing children in 2019. Of those, 4,828 -- or roughly 1% -- were marked as missing under circumstances indicating that the "disappearance may not have been voluntary; i.e., abduction/kidnapping," according to the FBI.

The 800,000 figure appeared in a 2013 story published by ABC, which has since been removed. ABC cited NCMEC as its source for that number. NCMEC told Lead Stories that the figure is outdated, writing:

It comes from NISMART-2 (National Incidence Studies of Missing, Abducted, Runaway, and Thrownaway Children) estimate of children reported missing. NISMART-2 was published in 2002 but was estimating the number of cases for calendar year 1999. 797,500 got rounded to 800,000.

The center directed Lead Stories to look at the numbers reported by the FBI. For 2013, the FBI recorded 462,567 reports of missing children.

Lead Stories has covered claims about missing children before. Here are some of the latest stories: