Was Wayfair selling human trafficked children via postings for very expensive cabinets on their sales website? No, there is no evidence to support the claim and plenty of evidence to dispute it. A Reddit user claimed that overpriced cabinets with female names were a cover for human trafficking and the company was actually selling kidnapped children. That person told Lead Stories she had no evidence of a human trafficking operation, but she "just asked if it was possible." Wayfair has denied the connection to Lead Stories, stating there is "no truth to these claims" and that the "industrial grade cabinets that are accurately priced." The company acknowledged a "price glitch" on some items that was being corrected and added there was "no truth to that rumor" its CEO had resigned. Claims that listings were named after missing children also proved wrong, with one of the "missing" posting her own denial on Facebook.

The claims appeared as a post (archived here) where it was published by Facebook on July 9, 2020. It opened:

So I just shared a post about kids being sold on Wayfair so I looked it up and it's legit they're really trafficking kids on that site we needa make this known!

So I just shared a post about kids being sold on Wayfair so I looked it up and it's legit they're really trafficking kids on that site we needa make this known!
Update: So I called the police and I have notified them about this and someone had told me that if you had visited that site you must report it to the police so you don't get flagged for child pornography so if you clicked that link and searched the scu numbers please for your safety call the cops and let them know, also it will help get this seen by those who need to see it
Update: 3:11 pm they had another officer call and they want this post taken down so i am taking it down when they call back
Update: 5:15 pm they finally called back and said I don't have to take it down and that they were aware of this already

The conspiracy theory is an evolution of the belief that many rich, famous, and powerful people use kidnapped children for pedophilia and for harvesting chemicals from their bodies. The new twist is these purported monsters do their shopping for young victims on Wayfair, a Boston-based third-party online seller of furniture and home goods.

Wayfair released a statement to Lead Stories on July 10, 2020 after the claim went viral, denying the connection to human trafficking.

There is, of course, no truth to these claims. The products in question are industrial grade cabinets that are accurately priced. Recognizing that the photos and descriptions provided by the supplier did not adequately explain the high price point, we temporarily removed the products from site to rename them and provide a more in-depth description and photos that accurately depict the product to clarify the price point."

The claim began on a reddit conspiracy subthread, claiming "Is it possible Wayfair involved in Human trafficking with their WFX Utility collection? Or are these just extremely overpriced cabinets? (Note the names of the cabinets) this makes me sick to my stomach if it's true :("

It was accompanied by a screen grab of the search for the cabinets. 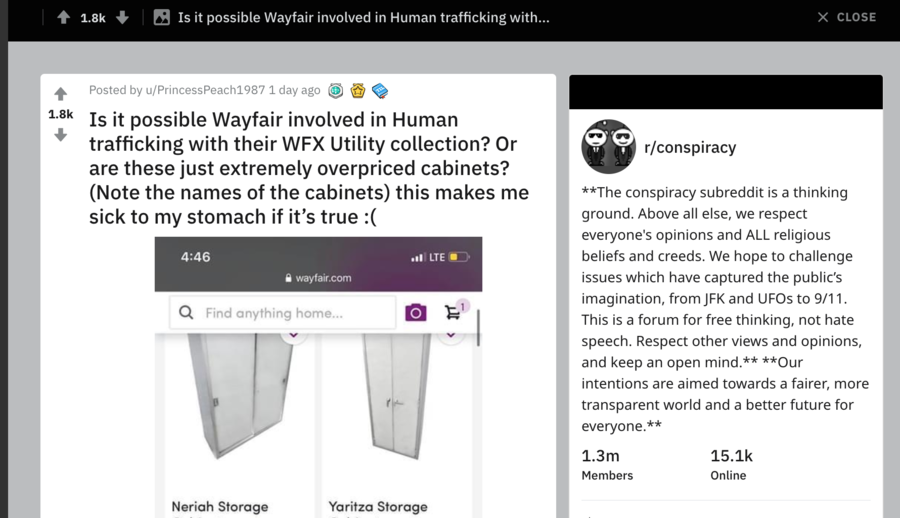 The cabinets shown were named Neriah, Yaritza, Samiyah and Alyvia and were for sale from $12,699.99 to $14,499.99. Here are the prices of the cabinets with the feminine names:

Users became suspicious when the cabinets with the higher prices were removed from the website, claiming it was proof of a child sex trade. One person wrote:

They deleted everything off their site an hour or two ago. My friend took screen shots of everything she could. Seems like they are absolutely scrambling at this point. Something is wrong here. Looks like the internet busted a child sex trade front. I really hope they go down. 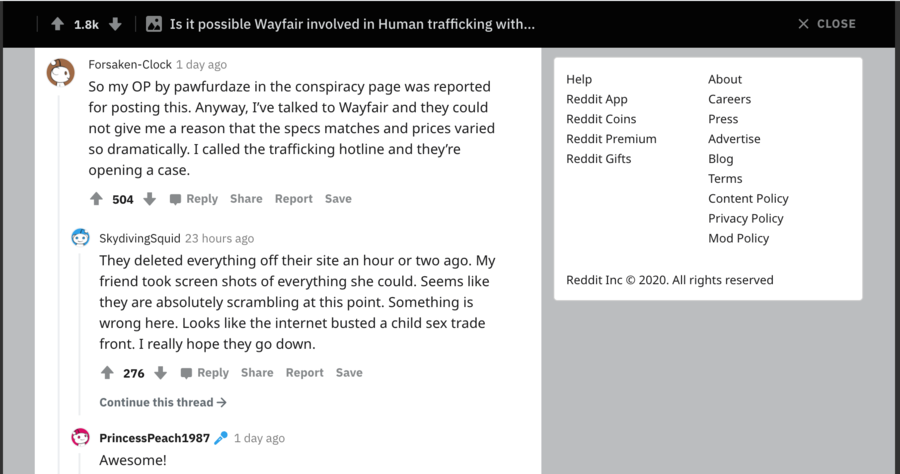 The original poster on reddit, PrincessPeach1987, responded to Lead Stories on July 11, 2020 with an explanation of why they posted their message, noting they "didn't exactly accuse them I just asked if it was possible."

Hi, I simply posed the question after viewing some storage options on Wayfair and noticing the insane pricing for the dingy cabinets. I didn't exactly accuse them I just asked if it was possible. My theory was not that they were shipping children in cabinets, but that they were using these links as a front to clear large amounts of money. Similar to on Ali express, I've heard of people contacting a seller on Facebook of fake luxury items and they get sent a hidden link on Ali for an iPhone charger for $1, then they change the quantity to 121 and put a note in the instructions for the purchase with a color code. They check out as normal. A few weeks later they are sent a fake Bag from China. So knowing that I used the same logic on this."

Newsweek contacted the original poster from reddit who said they were suspicious of the extreme pricing. PrincessPeach1987 claimed to be "involved in a local organization that helps victims of human trafficking," which has led her to be "suspicious most of the time now." They claimed they posted their suspicions to "see if anyone else had more details," and not as an accusation.

The claim THEN morphed into an accusation that searching the SKU numbers on Yandex, a Russian search engine, resulted in images of child pornography.

I was privately messaged about searching for the pictures for proof on the Russian web search called yandex. PLEASE STOP...

An article was published on Fortune detailing the connection between Yandex and child pornography with the headline "Yandex, Russia's biggest search engine, is an on-ramp for child sexual imagery, experts say."

Experts say the spread of images of child sexual exploitation online has reached unprecedented levels, calling the situation a major social crisis. While much of this material spreads through well-hidden channels, such as the so-called dark web, there is a major culprit hiding in plain sight: Yandex, Russia's largest technology firm.

Yandex is the most-used search engine in Russia and the fifth most popular worldwide. It has a Nasdaq-traded stock and a market cap of over $14 billion. According to cybercrime experts, though, the site has not implemented controls employed by other large search engines that have cut the accessibility of images showing child sexual abuse. As a result, they say, Yandex has become a major vector for the spread of child sexual imagery online, including by providing a user-friendly on-ramp to darker corners of the Internet. The company's role in spreading illicit images around the globe appears to be, in large part, an unintended consequence of Russian government policy.

However, any 7-24 digit number that is searched with "SRC USA" on Yandex also returns results of photographs of young girls but they are not of a specific girl and they are not pornography. 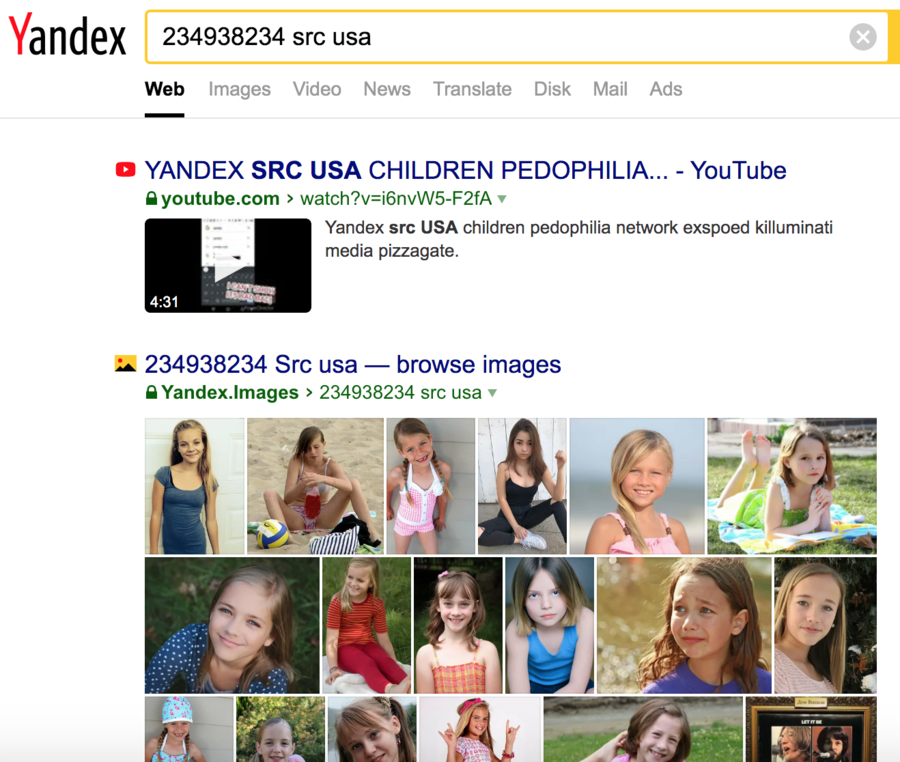 One part of the conspiracy theory is that the feminine names of the cabinets represent missing girls.

Social media users claimed Samiyah Mumin was missing but she posted a 50-minute video to debunk the claim that she is missing.

The video began: "Cause y'all really about to irritate me being weird. I'm like, what? How am I missing? And I'm pregnant? Let me know how that go. How am i missing and I'm pregnant. Got a whole belly out here. Let me know. Who are you? How are you going to post about me being missing and you don't even know me...Don't play with nobody's life like that. For real."

Cause y'all gone get me started idgaf no more

Another person social media users claimed the Alyvia cabinet is named after missing Alyvia Navarro. She was found dead shortly after she went missing, according to a 2013 ABC News report.

Alyvia Navarro, 3, of Wareham, Mass., was pronounced dead hours after she was reported missing, drowned in a pond near her grandmother's home, on the same day."

Hundreds of thousand of children go missing every year in the United States, according to the National Center for Missing and Exploited Children. With over 400,00 reported missing in just 2019 the there is a likelihood that a missing child would have the same name as the cabinets on Wayfair.

When a child is reported missing to law enforcement, federal law requires that child be entered into the FBI's National Crime Information Center, also known as NCIC.
According to the FBI, in 2019 there were 421,394 NCIC entries for missing children. In 2018, the total number of missing children entries into NCIC was 424,066."

Wayfair was criticized in 2019 after it was revealed the company was selling children's beds to ICE border detention camps. Employees protested the sales and Wayfair's stocks dropped as the news broke.

As the story gained traction, a claim began to go viral that the CEO of Wayfair resigned.

BREAKING: Wayfair CEO "steps down" amid allegations the company is involved in child trafficking.

Wayfair told Lead Stories on July 11, 2020 that was not true and gave a further explanation about the expensively priced items being removed from their website.

There's no truth to that rumor, our CEO has not stepped down.
There was a pricing glitch that was impacting some products on site and we have taken steps to address that pricing issue," the company said via email.