Were Kenosha protesters playing "a stupid game" with an armed man seconds before the man shot two of the protesters? No, that does not appear to be true: As more video and still pictures emerge, it seems most likely the people who chased the armed man heard he had just shot someone and those who attacked may have been trying to stop the man from shooting anyone else. It is almost certain the person with the skateboard heard the man shoot just moments before hitting the gunman with the skateboard.

The "stupid games" claim originated with a meme (archived here) published on the "Shooters Hangout" Facebook page on August 26, 2020, under the title "Still picture of rioters hitting young man." It opened:

Still picture of rioters hitting young man with skateboard one second before he was shot! Like I said....play stupid games, win stupid prizes!

The "he" in the meme apparently refers to the skateboard-wielding protester.

Law abiding Americans are going to start defending themselves.

According to law enforcement agencies, two people were killed and a third was seriously wounded in the shooting late on the night of August 25, 2020, during a protest over the police shooting of Jacob Blake.

While the person who wrote the "stupid games" meme may have intended to be talking tough or to be ironic or sarcastic by calling the confrontations a game, the available context suggests the man with the skateboard in the meme's photo likely knew the person he was attacking had already shot at least one person.

Seventeen-year-old Kyle Rittenhouse, of Antioch, Illinois, is now facing charges of first degree homicide in the shootings. Earlier in the evening of August 25, he had been filmed and photographed with several armed adults who were acting like they were guards at businesses in Kenosha, during what the Milwaukee Journal Sentinel reported were at-times violent protests and looting triggered by the police shooting of Blake on August 23.

Rittenhouse appears to have allied himself with self-styled "militia" groups who armed themselves and descended on Kenosha after the Blake shooting. Kenosha County Sheriff David Beth said, at a recorded press conference, that he had refused to deputize any of them.

The Milwaukee Journal Sentinel identifies Rittenhouse as the same teen who appears -- in a video posted to social media -- to shoot a protester in the head in a parking lot of Bert & Rudy's Auto Service at the corner of 63rd and Sheridan in Kenosha. The figure, who matches later video of Rittenhouse, then runs from the scene.

In video posted by a freelance videographer named Brendan Gutenschwager, Rittenhouse is seen being chased by a crowd in which people can be heard shouting, "He shot someone," while others point at him as he runs past. Just before the man with skateboard tussles with a man appearing to be Rittenhouse and is shot, it appears on video as though Rittenhouse fires two point-blank shots at a man who has kicked him in the head as he sits in the street pointing his gun at people approaching him.

Here is a series of screengrabs from videos of the event that were posted to social media and to the website of The New York Post.

This video starts as the man who appears to be Rittenhouse is being pursued down a street. The gunman stumbles and falls, then sits up facing his pursuers and points his rifle at someone approaching, who backs off.

Note the person in light-colored pants in the foreground, just right of center. Note also the figure on the left side, moving to the center, carrying a skateboard. 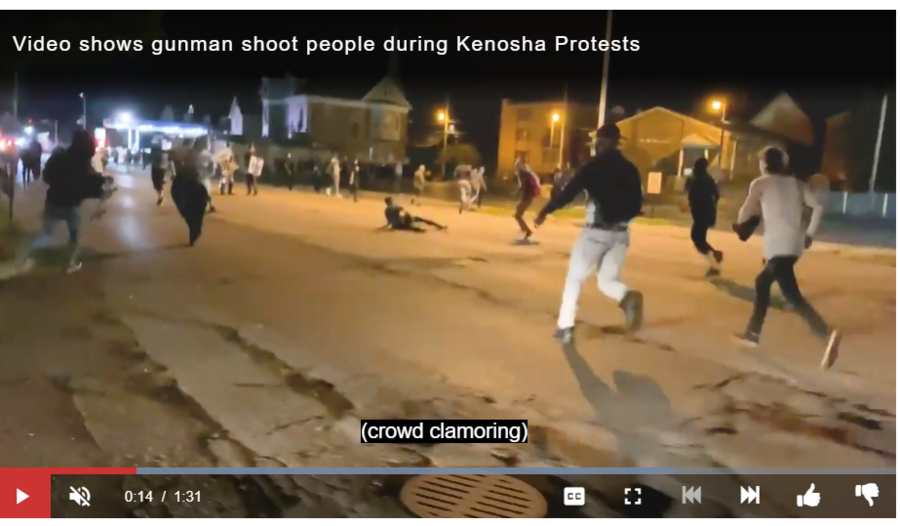 In the next screengrab, the person in light-colored pants who has been following the man who appears to be Rittenhouse reaches him and jump-kicks him in the head. It may be that the two gunshots heard on the tape at that time are Rittenhouse firing at the person in white pants and missing. Note the person with the skateboard stepping forward from the left side of the frame. 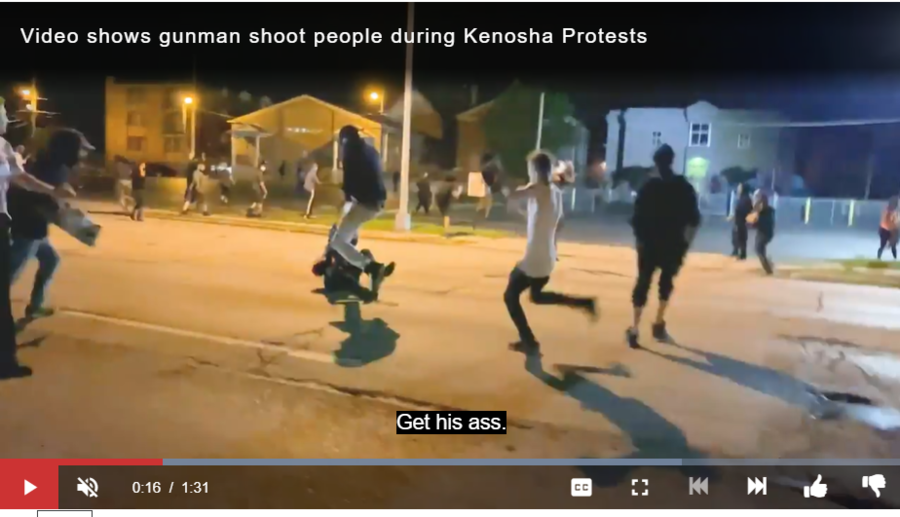 In the next screengrab, the person in light-colored pants rolls away, apparently unharmed, as the skateboard-carrying person hits the man appearing to be Rittenhouse and then drops the skateboard. 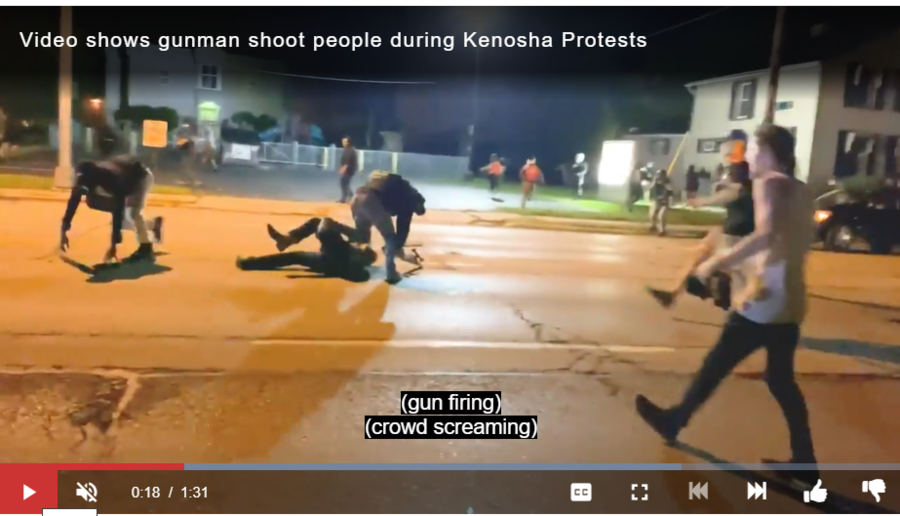 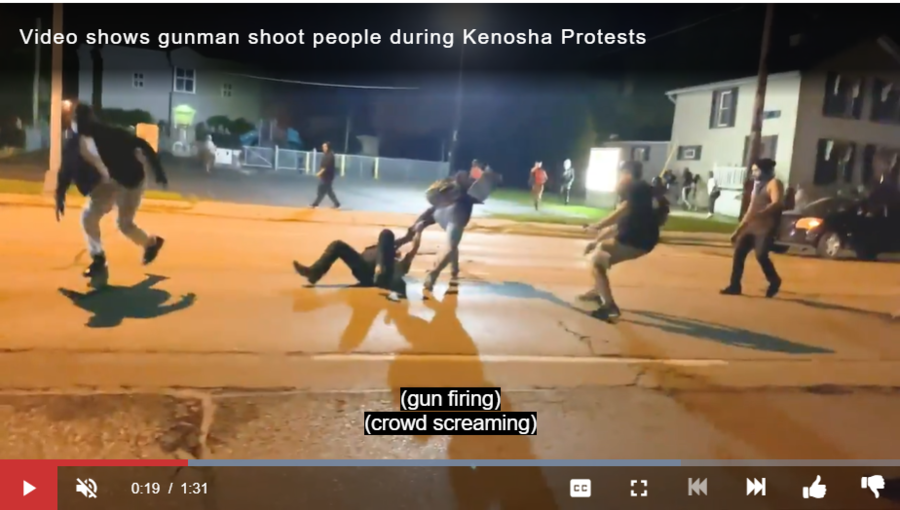 In the next screengrab, the person with the skateboard is on the ground as a person with a red backpack rushes the gunman and is shot. In the video, someone can be heard screaming "Medic!" 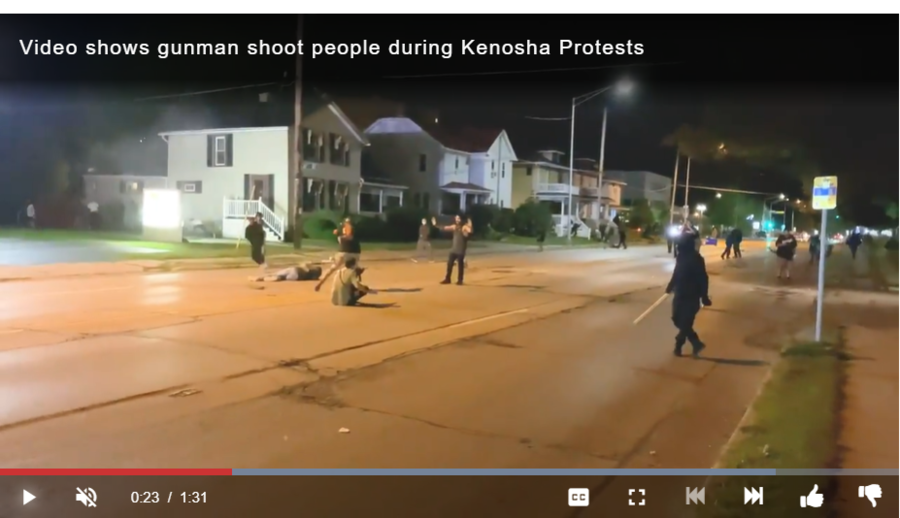 In the video, the man appearing to be Rittenhouse stands up and turns and walks about a block to an intersection where several police vehicles are blocking traffic. He raises his arms, with his gun hanging from its sling, and is allowed to walk past the police cars while people on the sidewalks yell to police that he shot someone.

Six minutes later footage shows Mr. Rittenhouse being chased by an unknown group of people into the parking lot of another dealership several blocks away.

First shooting
While Mr. Rittenhouse is being pursued by the group, an unknown gunman fires into the air, though it's unclear why. The weapon's muzzle flash appears in footage filmed at the scene.

Mr. Rittenhouse turns toward the sound of gunfire as another pursuer lunges toward him from the same direction. Mr. Rittenhouse then fires four times, and appears to shoot the man in the head. 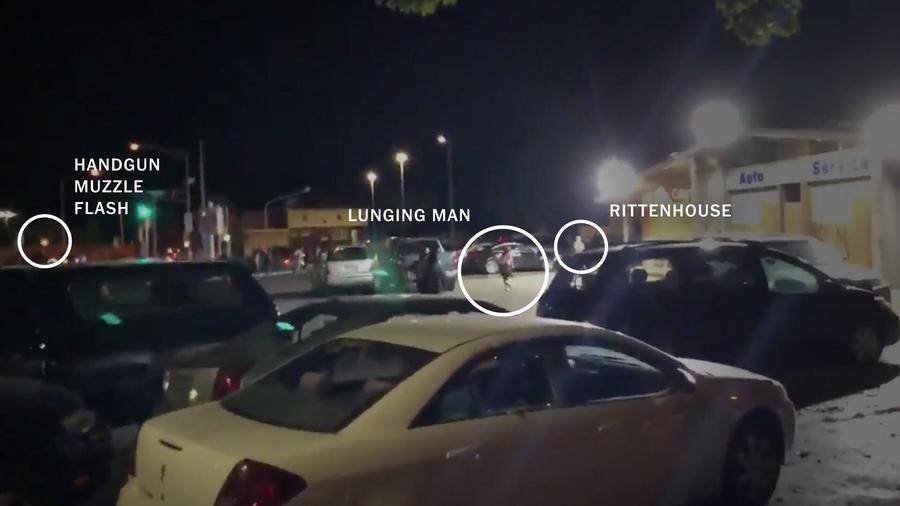 It remains unclear why Rittenhouse was chased by the lunging man and if the threat he posed justified shooting him in the head. That is something further investigation and a jury trial will have to determine. It also remains unclear what information the men with the light-colored pants, the skateboard and the backpack had about the first shooting at the time they were chasing Rittenhouse before the second shooting. They may have just heard gunshots and cries from the crowd that "he shot someone". Or maybe they knew more about the first shooting. That is something else for the investigation and trial to look into. But it seems evident they weren't "playing games" either way.

Rittenhouse was later arrested in Illinois on a fugitive warrant that Chicago Tribune staff report includes the reference to first-degree homicide charges he faces in Wisconsin.