Did the U.S. Centers for Disease Control and Prevention fraudulently add deaths from poisoning, trauma and unintentional injury to its tally of COVID-19 deaths?

No, that's not true: That claim is based on a mischaracterization of CDC listings of patients' other health conditions, which are commonly listed on death certificates as "comorbidities." The claim cites as a source "c19study," an anonymous web post that poses as a scientific study while adhering to none of the transparency, peer review, and critical thinking conventions by which scientific thought is advanced. The "C19study" webpage makes false claims about the findings of published medical research.

The claim about inflated COVID-19 death tolls appeared in an article published by Gateway Pundit on September 3, 2020, titled "This is Fraud" (archived here) which opened:

10% of Reported COVID-19 Deaths for Those Under 35 as Reported by the CDC Are Due to Poisoning, Trauma and Unintentional Injuries.

This is Fraud: 10% of Reported COVID-19 Deaths for Those Under 35 as Reported by the CDC Are Due to Poisoning, Trauma and Unintentional Injuries

The death rates for COVID are questionable at best. And you won't believe the category for 10% of the COVID-19 deaths for individuals under the age of 35. On Saturday night we posted an article about COVID-19 - SHOCK REPORT: This Week CDC Quietly Updated COVID-19 Numbers - Only 9,210 Americans Died From COVID-19 Alone...

That's not what the CDC data shows, said Jeff Lancashire, a spokesperson for the CDC, in a Sept. 4, 2020, email response to questions from Lead Stories:

In looking at the tables, it appears to be more like 3% ((135+40)/5424) and not 10%. However, this still doesn't mean the deaths were due to poisoning/trauma, and unintentional injuries; it just means that those were also listed on the death certificate...we don't currently know how often COVID19 is the underlying cause in cases where the decedent contracted COVID19 while being treated in the hospital for injuries, which could explain some of these cases."

Dr. Robert Anderson, chief of the mortality statistics branch of National Center for Health Statistics said terminology is being misused in claims like this. In an Aug. 31, 2020, email exchange with Lead Stories, Anderson said this family of claims about fraudulent data blurs the important distinction between "cause of death" and "comorbidities," which are other medical conditions listed on the death certificates of persons killed by COVID-19.

The Gateway Pundit article is one in a series that claim thousands of COVID-19 deaths could have been prevented by hydroxychloroquine, an anti-malarial drug in use for at least 60 years. Lead Stories has previously debunked a related claim that a "massive international study" showed a much lower COVID-19 mortality rate in countries where hydroxychloroquine was prescribed to patients.

The U.S. Food and Drug Administration granted Emergency Use Authorization early in the pandemic when doctors tested hydroxychloroquine's anti-inflammatory effects, but the FDA then revoked that authorization after studies indicated the risk of using it outweighed the benefits. After President Donald Trump ignored U.S. public health experts and declared that he thinks it works, pro-Trump sites like Gateway Pundit took up the cause.

But Gateway Pundit relies heavily on "c19study" an anonymous web post that misstates the findings of at least two medical journal papers it cites as proof of its claims. Though it poses as a "massive international study," it does not qualify as a scientific paper: There is no named author. The map included does not list the data source for its illustration. 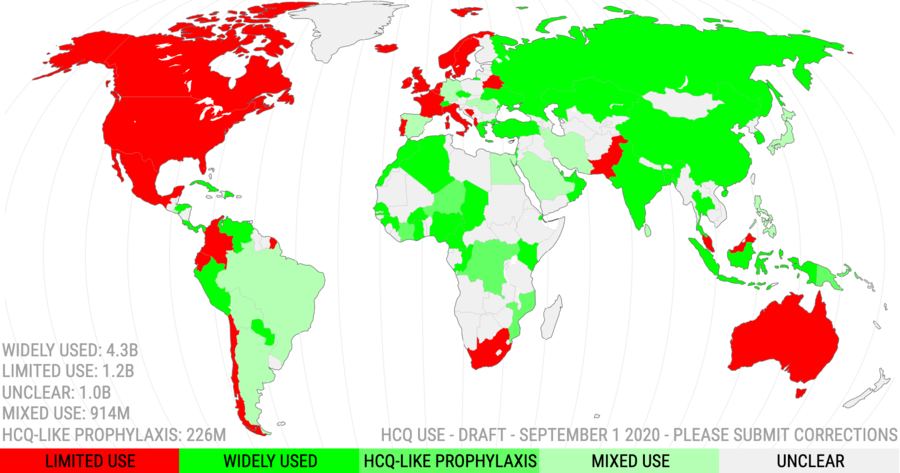 A medical researcher whose findings are misquoted on the website where the "c19study" document appears says "COVIDAnalysis" is a misinformation operation. The anonymous "C19study" writer misstates the findings of the peer-reviewed paper about hydroxychloroquine's effectiveness after patients were exposed to COVID-19, says David Boulware, M.D., Ph.D. Boulware, of the Division of Infectious Diseases and International Medicine at the University of Minnesota Medical School, said in a September 2, 2020, email to Lead Stories that:

Their analysis is 100% incorrect to a ridiculous degree. They are free to try to publish their analysis in a peer-reviewed scientific journal. That it is not published, suggests either their objective is not to sway physicians or it keeps getting rejected.

In another instance, the anonymous author of "c19study" uses research that does not support use of hydroxychloroquine as proof the anti-malarial should be used. The authors stated "HCQ alone is not effective," but the "C19study" writer says he or she knows their project's results better than they do and declares the paper actually proves the drug is effective.

Lead Stories reached out to Yale School of Public Health Prof. Harvey Risch, M.D., Ph.D., a hydroxychloroquine advocate, to ask him about that claim by the anonymous author. "This study has numerous large flaws that have been discussed by other authors," Risch wrote back in a Sept. 3, 2020, email exchange with Lead Stories. Asked if this means the "c19study" author is correct that the study proves what it says it does not, Risch did not further reply.

While the dean of Yale's School of Public Health has defended Risch's right to advocate for hydroxychloroquine in the face of scientific consensus against it, Risch's actions have brought a strong rebuke from his Yale colleagues, 29 of whom signed an open letter warning that Risch is refusing to accept sound science and is hindering the battle against COVID-19.

As his colleagues, we defend the right of Dr. Risch, a respected cancer epidemiologist, to voice his opinions. But he is not an expert in infectious disease epidemiology and he has not been swayed by the body of scientific evidence from rigorously conducted clinical trials, which refute the plausibility of his belief and arguments...

While minority opinions, anecdotal evidence, novel interpretations and challenges to orthodoxies in a field can be important, at some point, the application of the scientific method generating evidence from multiple, well-designed clinical trials and observational studies does matter and should be heard over the noise of conspiracy theories, purported hoaxes, and the views of zealots.

Those signing the letter include Yale Medical School's chairman of internal medicine, the epidemiology department chair and seven epidemiology professors and the chair of the medical school's public health department

The COVIDAnalysis network, which includes C19Study.com, C19HCQ.com, and HCQTrial.com, does not disclose its ownership on the sites and would not disclose it to NewsGuard, nor could NewsGuard independently determine who owns the network. Thus, there is no way to know if the sites -- which are not financed by advertising or subscriptions -- are financed by those with a financial or political interest related to the promotion of hydroxychloroquine.

Read NewsGuard's full assessment of the COVIDAnalysis network at this link.