Are Dr. Anthony Fauci, Bill Gates, George Soros and Jeffery Epstein all connected through an association with the company Moderna? No, that's not true: Dr. Fauci was not the first CEO of Moderna, he and Bill Gates did not attend the same college and they were not roommates. George Soros who was not a Nazi, did not have a hand in either IG Farben or Moderna, and Jeffery Epstein, who is dead, was not a financier of Moderna.

The claim appears in a video posted here (archived here) where it was published by the Facebook page Trump Supporters NZ on August 27, 2020, under the title "The Fauci, Gates, Soro's & Epstein Connection". It opened:

The Fauci, Gates, Soro's & Epstein Connection: Moderna is the corner stone. Dive down this rabbit hole have your mind blowin! We'd love to know what you think? Comment your thoughts below.

The video has a very clean appearance but lacks the opening and closing credits of a true professional production. Other than a small icon of a human figure in the corner, the video offers the audience no information about its origin. The moving footage is high-quality stock video clips spliced together with a variety of blends. The scenes show laboratories and board rooms, syringes drawing fluid from vials, industrial filling of vials, a shadowy figure with a briefcase walking up the stairs and down a hallway, hands counting money.

Interspersed with the stock video are still images of the men and institutions who are targeted by this conspiracy spinning. The still images have video effects applied, so they move by virtue of pans and zooms. When the slide of Bill Gates appears, a red and green post-processing static filter is used to make the image appear out-of-sync.

For emphasis, sometimes the text of the narrative appears as an overlay in a sleek typeface. The soft-spoken male narrator has a light Australian accent and a gentle, although didactic, conversational manner as he introduces one falsehood after the next. The male narrator is not just a voice actor. This is the voice of a man who goes by the name, Max Igan, who runs a website called The Crowhouse. 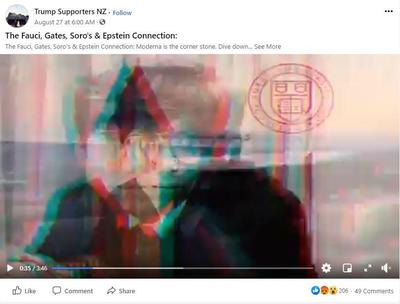 This is the original homegrown video which is the source of the audio of the first half of the sleek production edit. In this version Max Igan is walking around his yard with a handheld camera addressing his audience. This audio track has even had some processing to give it a slight indoor echo for the production edits. This copy is hosted by John the Savage (here) and is titled, "

The transcript of the video follows:

But it's interesting if you look at Moderna.
You know Moderna. Moderna is in stage three of their vaccine development.
And you know the vaccine is... what it's always been about... the vaccine is already there.
The vaccine is about modifying your DNA.
That's that's what this whole thing's about.
They're just pretending that they've got to develop it. It's already developed.

Moderna.
When Moderna was formed, the first CEO of Moderna was a young Cornell graduate by the name of Anthony Fauci.
Interesting.
He was the first CEO of Moderna when he graduated from Cornell.
When he was at Cornell, his roommate was one Bill Gates.
Interesting.
Bill Gates and Anthony Fauci were roommates at Cornell.
Fauci was the first CEO of Moderna.
Moderna. The company, Moderna. There was a company in World War II that was heavily involved with what happened in World War II
(and I don't buy into the official story of World War II)
...but there were certain experiments that were being done, and there was a company that was heavily involved by the name of IG Farben. IG Farben was run by a Jewish guy turned Nazi later turned American by the name of George Soros.
George Soros broke up IG Farben and he formed Moderna.
One of the main financial backers of Moderna.
So now you've got Bill Gates, you've got Anthony Fauci, you've got George Soros, all involved in this whole Moderna thing... and one of the main financial backers of Moderna up until his alleged death, was one Jeffrey Epstein.
Interesting little circle of friendship don't you think?
Interesting little circle of friendship folks.

You know you can't make this shit up.
You honestly can't.
You know. 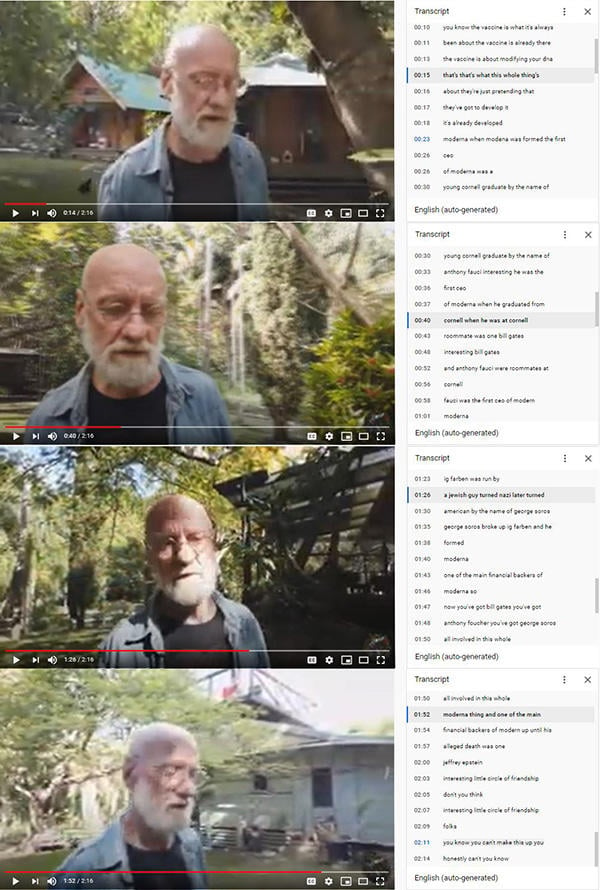 Stills from the video which was the source of the narration

Let's look at the claims made in the video, one by one:

Claim #1. "The first CEO of Moderna was a young Cornell graduate by the name of Anthony Fauci."

Claim #2. "Bill Gates and Anthony Fauci were roommates at Cornell."

False: Bill Gates was born in October of 1955 (here). He would have been only 10 years old when Fauci graduated from Cornell in 1966. Gates did not attend Cornell, he enrolled at Harvard in 1973, and would have been a member of Harvard's graduating class of 1977 had he not dropped out to focus on the company he founded with Paul Allen in 1975, Microsoft. He did eventually receive an honorary doctor of laws degree from Harvard in 2007 (here)(archived here)

Claim #3. "IG Farben was run by a Jewish guy turned Nazi later turned American by the name of George Soros."

False: George Soros was born into a Jewish family in Budapest, Hungary, on August 12, 1930. IG Farben was a German chemical and pharmaceutical conglomerate that was not run by a Hungarian child. When the German company came into allied control at the end of World War II and was dissolved in 1945, that would have been the summer George Soros turned 15 years old.

Many of the people who were responsible for running IG Farben were tried for war crimes between 1947-1948 during the Subsequent Nuremberg Trials.

"The Law Reports of Trials of War Criminals" prepared by the United Nations War Crimes Commission in 1949 is archived.

George Soros was not a Nazi. This question has been thoroughly addressed in this 2016 article by Snopes, "Was George Soros an SS Officer or Nazi Collaborator During World War II?" (here)(archived here)

IG Farben was dismantled 65 years before the 2010 founding of Moderna, and George Soros had nothing to do with either company.

Claim #5. "One of the main financial backers of Moderna up until his alleged death, was one Jeffrey Epstein."

Jeffrey Epstein's business dealings are outlined in this July 8, 2019, Business Insider article, "Jeffrey Epstein made $200 million in 5 years after he registered as a sex offender. Here's how the mysterious financier made his fortune." (archived here) He started as a school teacher at the elite New York Dalton school. After the teaching job he moved on to Bear Stearns where he was an options trader. In 1981 he left Bear Stearns to start his own company, first called J. Epstein & Co., then the name was changed to Financial Trust Co. His last business was a DNA data mining company named Southern Trust. There are no records of Jeffrey Epstein being a main, or even a minor, backer of Moderna. (archived here)

Jeffrey Epstein was a convicted sex offender who died in his jail cell on August 10, 2019, while awaiting trial on new charges of sex trafficking. His death was ruled a suicide by the New York State medical examiner. This conclusion was questioned by both his lawyers and a former New York state medical examiner, Dr. Michael Baden, who was present at the autopsy. 'Whether Jeffrey Epstein is dead is not in question (archived here). (Autopsy report cover page archived here)

Last: "You honestly can't make this shit up."

Apparently stuff like that can be made up, because someone did.
It just can't be done honestly.