Did protesters block the entrance to Saint Francis Medical Center before the arrival of ambulances transporting the two Los Angeles County sheriff's deputies who had been shot in Compton on the evening of September 12, 2020? No, that's not true: Several protesters, including one who reportedly yelled "We hope they die," arrived at the hospital several hours after the ambulances arrived. These protesters were stopped by police and security before they got to the entrance.

One version of this claim appeared as a post published by the Facebook page "Officer Parker" on September 13, 2020, (archived here) with the following text for the caption:

We can no long afford to sit back. Abushed police? Protester blocking the entrance to the hospital. How did the protestors know what hospital to go to? How were they all just by chance there at the moment those officers were shot.
This is ridiculous and out of control. People need to start asking questions. Things just don't add up. Things don't make sense. Coincidences happen, but not this frequently and with precision.

After what happened in LA with protesters blocking the hospital entrance for two shot cops shouting they hope the cops die, the silent majority can no longer be silent. We can no longer stand back while these people tarnish our reputation and destroy our nation. Enough is enough

There has been some confusion on social media regarding the timing of what happened outside the hospital after the shooting. This likely resulted from the phrasing of a tweet from the Los Angeles County Sheriff's department (archived here). It was not clear that they were speaking of keeping access to the hospital clear for everyone -- and not speaking about the specific ambulance that transported the wounded deputies. About four hours elapsed between the time the sheriff's office first published a tweet saying there had been a shooting, and when they tweeted about not blocking the hospital entrance:

To the protesters blocking the entrance & exit of the HOSPITAL EMERGENCY ROOM yelling "We hope they die" referring to 2 LA Sheriff's ambushed today in #Compton: DO NOT BLOCK EMERGENCY ENTRIES & EXITS TO THE HOSPITAL. People's lives are at stake when ambulances can't get through.

Some posts mistakenly imply that the protesters must have known this crime was about to happen and planned to head off the ambulance transporting the wounded deputies to the hospital, or that they had actively tried to stop the ambulance.

Other tweets from "Officer Parker" continued to build on the mistaken belief that protesters outside the hospital arrived before the ambulance and had interfered with first responder's efforts to get the deputies to emergency care.

Leaders, influencers, football, basketball, clothing companies and politicians are all mighty quiet about this destruction going on. About the two cops that were literally ambushed and blocked from getting medical help. Your silence on this is very very loud and clear. We get it. (here)(archived here)

Intentionally depriving a person of life saving medical aid is murder. Your actions were to Intentionally deprive another from aid that would save their life. That is plain murder Or attempted. Every last one needs to be charged as such. Take back these cities! (here)(archived here)

This tweet gets right to the heart of why it is so important for this confusion to be clarified. If there were people who knew ahead of time that the sheriff's deputies were going to be ambushed, or if there was a coordinated plan to block first-responders after the shooting, it would point to a very serious crime.

The timing of what happened on the night of September 12, 2020, is that the deputies were ambushed by a lone gunman near the metro station just before 7 p.m. local time, and about five protesters showed up at St. Francis Medical Center shortly before 11 p.m. local time. Their behavior likely intended to call attention to themselves coinciding with the gathering of news crews for a press briefing from Sheriff Alex Villanueva at the hospital. One member of the press, NPR reporter for KPCC, Josie Huang, posted this photo of the press briefing not long before she herself was arrested (reported here)(archived here) when the sheriff's department moved to disperse the group of five protesters who have been described in some posts as a "mob."

Sheriff Villanueva speaking outside St. Francis where 2 deputies are being treated after being shot in Compton: "This is a somber reminder that this is a dangerous job, and actions, words have consequences and our jobs don't get easier because people don't like law enforcement." pic.twitter.com/CfdYlwameO

Huang also tweeted video of the confrontation with deputies, indicating no ambulances were blocked from entering:

A tense situation developing in Lynwood as a handful of protesters on sidewalk shout at deputies outside St. Francis medical center where 2 deputies are recovering from surgery after being shot tonight in Compton pic.twitter.com/wwpcnVFvOI

Several other accounts inaccurately described what happened. Podcaster Buck Sexton posted a screenshot of his own tweet on Facebook (here)(archived here) that said:

As if ambush of cops were not appallingly evil enough, a mob of "protestors" tried to prevent the cops who were shot multiple times from getting emergency medical care THIS IS BLM. You're seeing the consequences of the lib apparatus leveraging cop hatred for political power. 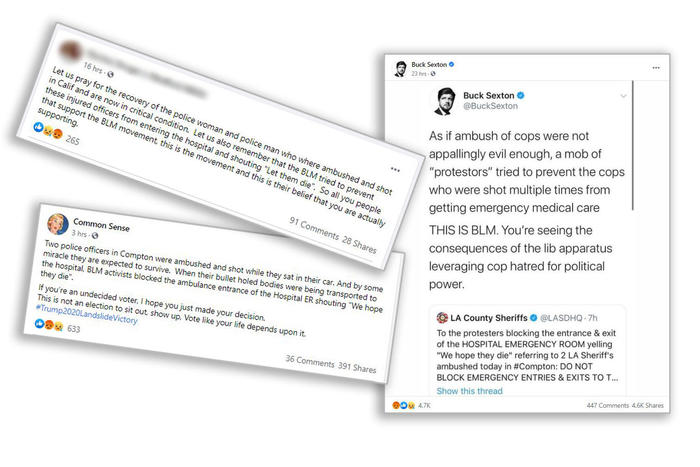 The five protesters involved identified themselves as representing the Africa Town Coalition, not Black Lives Matter.