Has the U.S. government "finally" admitted that marijuana kills cancer cells? No, that's not true. A paper published by the government's National Institutes of Health concluded that while "cannabis and its derivatives may help to alleviate disease and therapy-related symptoms, there is no clinical evidence of its anti-cancer efficacy." There is no "admission" to the contrary.

The claim appears as a post (archived here) published to Instagram on where it was published October 22, 2020 by "weedvsalcohol". It opened: 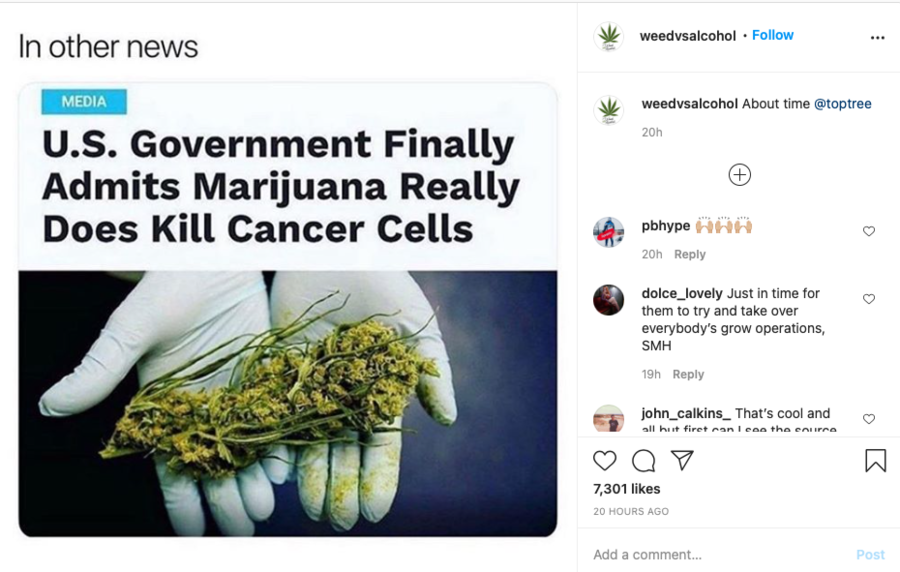 The claim apparently relies on this post May 26, 2016, on the Facebook page of nonprofit Cancer Research UK:

Here is the relevant part of the study to which the Cancer Research UK post refers, from the National Cancer Institute, updated October 6, 2020:

Cannabinoids may cause antitumor effects by various mechanisms, including induction of cell death, inhibition of cell growth, and inhibition of tumor angiogenesis invasion and metastasis.[9-12] Two reviews summarize the molecular mechanisms of action of cannabinoids as antitumor agents.[13,14] Cannabinoids appear to kill tumor cells but do not affect their nontransformed counterparts and may even protect them from cell death.

Still, as the lengthy 2016 Cancer Research UK post noted, the National Cancer Institute report includes many qualifications and recommends further study of results found in "preclinical trials" which typically include a small number of test subjects. The National Cancer Institute report, for example, notes that "a number of studies have yielded conflicting evidence regarding the risks of various cancers associated with Cannabis smoking."

The 2020 Instagram post is rebutted by a paper published by the medical journal, Cureus, on the National Institutes for Health website. That study, published January 19, 2019, warned of "False News of a Cannabis Cancer Cure":

Recent claims that cannabis can treat serious health conditions such as cancer have proliferated online, raising concerns within the Food and Drug Administration (FDA) and the oncology community [1]. These claims represent misleading or 'false news' [2], without basis in the medical literature [3]. Although cannabis and its derivatives may help to alleviate disease- and therapy-related symptoms, there is no clinical evidence of its anti-cancer efficacy [4].

The American Cancer Society also cautions against using cannabis as a supposed cure for cancer, writing that it could help ease symptoms of cancer but is dangerous if taken as a substitute for other treatments or as your sole remedy:

How can marijuana affect symptoms of cancer?

A number of small studies of smoked marijuana found that it can be helpful in treating nausea and vomiting from cancer chemotherapy.

A few studies have found that inhaled (smoked or vaporized) marijuana can be helpful treatment of neuropathic pain (pain caused by damaged nerves).

There are no studies in people of the effects of marijuana oil or hemp oil.

More recently, scientists reported that THC and other cannabinoids such as CBD slow growth and/or cause death in certain types of cancer cells growing in lab dishes. Some animal studies also suggest certain cannabinoids may slow growth and reduce spread of some forms of cancer...While the studies so far have shown that cannabinoids can be safe in treating cancer, they do not show that they help control or cure the disease.

Relying on marijuana alone as treatment while avoiding or delaying conventional medical care for cancer may have serious health consequences."

The American Cancer Society Cancer Action Network (ACS CAN), the Society's advocacy affiliate, has not taken a position on legalization of marijuana for medical purposes because of the need for more scientific research on marijuana's potential benefits and harms. However, ACS CAN opposes the smoking or vaping of marijuana and other cannabinoids in public places because the carcinogens in marijuana smoke pose numerous health hazards to the patient and others in the patient's presence."

Another site, Society for Integrated Oncologists, featured a blog by Dr. Eugene Ahn, a medical oncologist, that gave this quick answer to the question of marijuana actually curing cancer:

In cell cultures and animal models, cannabis-derived cannabinoids, particularly THC and cannabidiol, can have activity against some cancers (but paradoxically also accelerate the growth of others). But none of these studies provide evidence that cannabis can cure cancer (many drugs look great in cell cultures and animal models but fail in definitive clinical trials). ..However, given its proven benefits helping treat cancer side effects such as loss of appetite, neuropathic pain, and nausea, it is reasonable to use as an integrative treatment for those indications, but not in lieu of conventional therapy, especially in curative intent situations.

Similar claims cannabis or derivatives can kill off cancer cells or provide a cure have been made about cannabis oil, which Lead Stories wrote about here.