When President Trump said some undocumented children were brought across the southern border into the U.S. by "coyotes" was he using a xenophobic term for the parents of those children? No, that's not true: Trump was using the border region's slang term for the smugglers who lead illegal border crossers through the arid wilderness from Mexico into the U.S. The term is used by law enforcement, by border region residents and by the smugglers themselves, ascribing to them the grudging respect desert people have for the smarts, speed, and resilience of the small canid.

Imagine calling the immigrant parents that bring their children to the United States for a better life 'Coyotes' The level of xenophobia is sickening."

Hogg was one of many Twitter users who misunderstood the term and took to their favorite social media platform to criticize Trump's language after the October 22, 2020 debate between the president and his Democratic challenger, former Vice President Joe Biden. Trump used the word when answering the debate moderator's question about the 545 children whose parents cannot be located after immigration officers separated children from their parents and deported the parents:

Children are brought here by coyotes and lots of bad people, cartels, and they're brought here and they used to use them to get into our country. We now have as strong a border as we've ever had,"

Here is the part of the debate on immigration, in which Trump says it, according to The Guardian's YouTube channel.

According to the National Review on October 23, 2020, "In the New York Times archives, 360 articles have used the term "coyote" and "immigration." In other words, it's a common reference to human smugglers across the United States' southern border with Mexico into desert-heavy and coyote-heavy areas in the Southwest through tunnels dug under the border and other means.

Latino USA, posted a story on September 12, 2014 titled "Coyotes: 10 Things To Remember About Smugglers." It opened:

The thousands of Central American and Mexican children that have come to the US border in the past few years are not getting here on their own. Here are the 10 things you need to know about so-called 'coyotes', the groups of human smugglers that cross migrants in the U.S. border."

The story uses the term 12 times, including in the first point:

According to ICE (Immigration and Customs Enforcement), human smugglers are not the same as human traffickers. Human smuggling involves the voluntary intention to get yourself smuggled across international borders, and a smuggler or coyote, is your facilitator. Human trafficking, on the other hand, is the transportation of people with the purpose of selling them or exploiting them in forced prostitution and other forms of labor. In trafficking, people are usually held against their consent."

Still, the misunderstanding of the term was rampant on social media during and after the debate. Consider this collage of tweets posted by Sophia Narwitz to Twitter to mock people like Hogg's outrage:

Tonight on blue checkmark twitter, they don't know what coyotes are.

(This isn't even half of all I found 🥴) pic.twitter.com/Jsh57jSBb1

Here is a larger image of the collage: 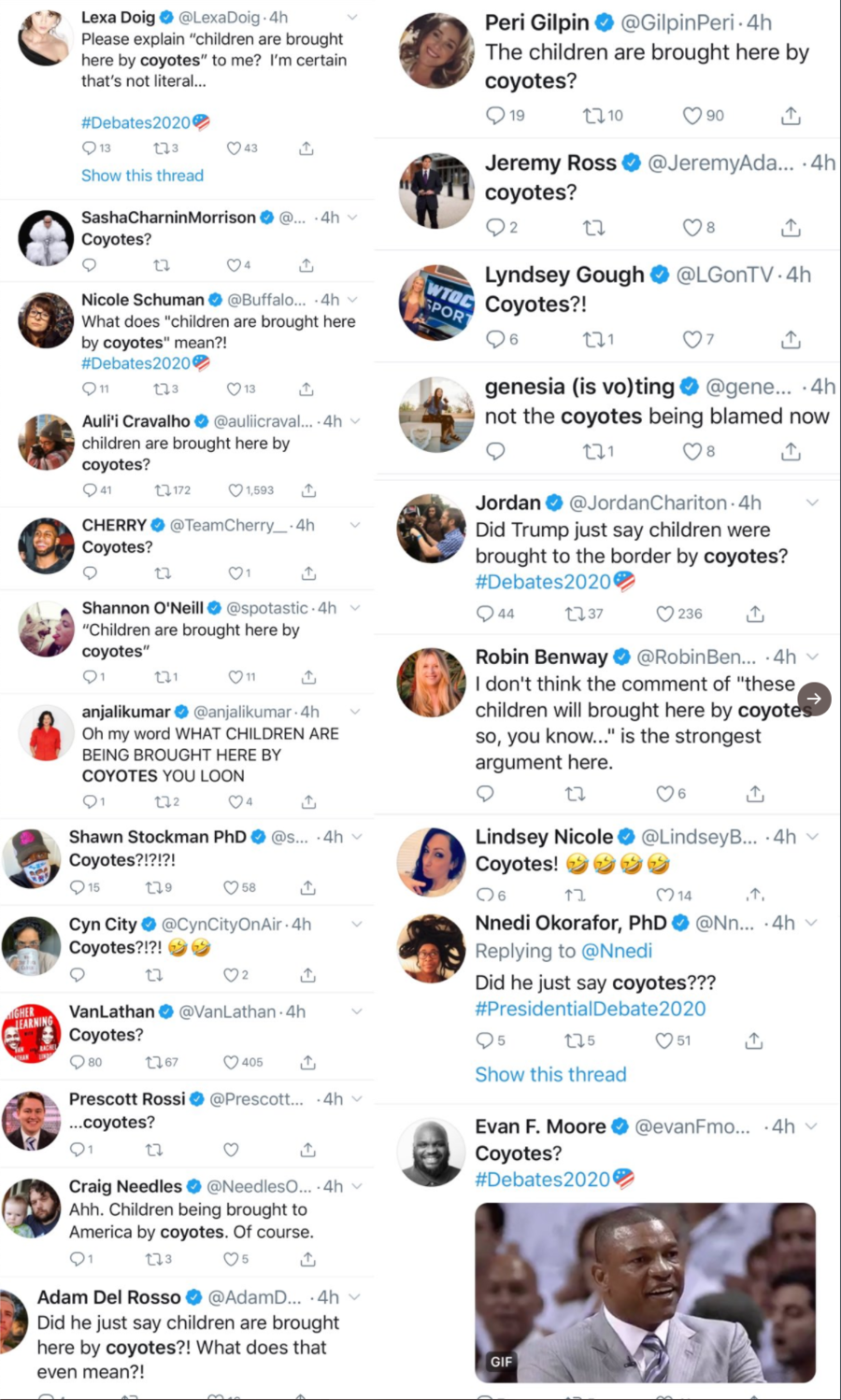 Some politicians also misunderstood, thinking Trump meant that the coyotes for which human smugglers are named, carried children and families across the border. This (archived here), from Dar'shun Kendrick, an attorney and state representative from Georgia:

Did @realDonaldTrump just say 545 kids they can't find their parents for came over through "cartels and coyotes"?! How the hell does a coyote bring a whole human across the border?! Lord-----stop talking. #FinalDebate

Kendrick got taken to task for posting the misunderstanding, which she tried to clean up later in the thread. This post is from Andre Leadon:

This is literally what you are thinking and it's absolutely insane. pic.twitter.com/vVhJ40QxTI