Did Facebook ban this "President Trump campaign ad"? No, that's not true. It goes without saying that videos playing on a platform proclaiming they are banned by that platform have not been banned. Those behind such posts use them as a way to profit from online traffic. This example is not A Trump 2020 campaign ad. It does not carry the required disclaimer that it was authorized by the Trump campaign, nor that it was NOT authorized by the Trump campaign. It is just a patriotic video, with a manipulative false caption added to it, to game for traffic.

The video reappeared as a post (archived here) published by Ted Nugent on October 27, 2020. The video has been reformatted so that the upper half of the screen is black with prominent white lettering that remains on the screen through the entire 3:44 minute video, the caption:

When the video opens, a small watermark is visible, a Punisher skull and the handle @StormIsUponUs. There are no opening or closing credits in the traditional sense. There is no evidence that @StormIsUponUs is the person who added the false claim about "President Trump campaign ad being bannd by Facebook." It is quite possible that another person copied and altered their "Best is Yet to Come- #Trump 2020" video.

The last five seconds of the video feature a less carefully produce addition, a complicated and undated screenshot from "Kenneth's"mobile phone involving posts from at least two other people, "Jami" and "John." "Kenneth" forwarded a link: "John's" share of the video with this caption:

Facebook today announced it will be banning Trump campaign ads such as this, so I ask if you feel this was worth watching please share it with others before it gets blocked. For me it really helped me recall the great history of this country I'm proud to live in. Thank you my friends and family. John 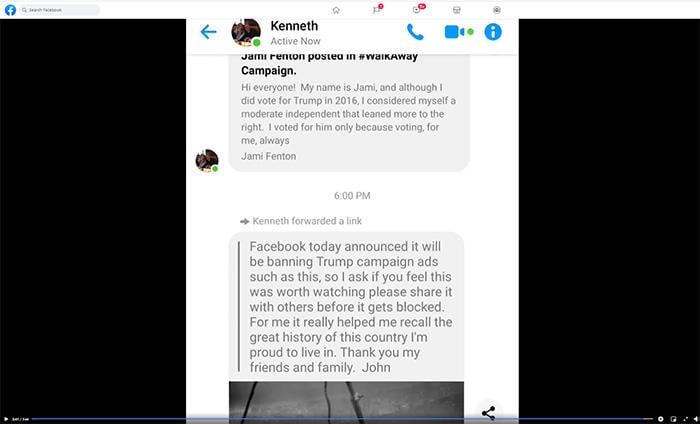 Because the screenshot is not dated, it is difficult to know when "John" claimed that "Facebook today announced it will be banning Trump campaign ads such as this," but Facebook has not announced that it would be banning Trump campaign ads. The president's re-election campaign has spent $87.4 million on Facebook advertising since July 1, 2020, as charted by the NYU Ad Observatory using data from the Facebook ad Library.

Facebook has removed specific ads from the Trump campaign, but this is on a case-by-case basis because a specific ad violated a Facebook advertising policy and not the result of a sweeping rule "banning Trump campaign ads."

Below are two examples of ads that were scheduled to run on October 26- 27, 2020, in Michigan and Wisconsin, which did not comply with Facebook's ad policy. View all ads in Facebook's ad library from Donald J. Trump here. 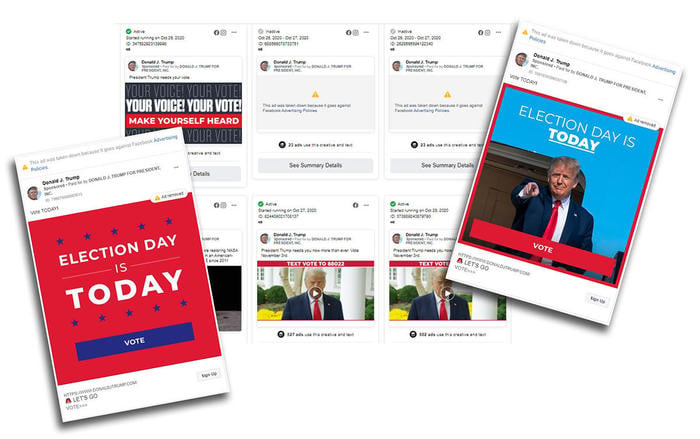 There is nothing at all controversial about the original "Best is Yet to Come- #Trump 2020" video that might violate Facebook's terms of service to justify its removal. There is no reason why Facebook would "ban" the video. In fact, many copies of this video that were mirrored on multiple YouTube channels have been posted and continue to gather engagement on Facebook. This version with the false claim that it is being banned also continues to be shared and gather engagement.

On August 7, 2020, FactCheck.org published an article, "Video Using Trump's State of the Union Address Wasn't 'Banned'" The fact-check is not addressing the content of the video, but the false claims that this is a Trump campaign ad, and that it is being banned. Now that some posts had that fact-check applied to them, a new layer of false claims of censorship are developing.

Below is a confusing post (archived here) made on October 27, 2020. In this post, the fact-checked video had been transformed to a screenshot -- into an unverifiable flattened bundle of falsehood. The post is captioned, "Share this will ya, This is a Trump ad, and It's being removed so the faster we pass it on the better we are." This is a screenshot of the fact-checked video with the false claim. The viewer can not read the fact-check nor can they watch the video. They have no way to discover the context of what is going on here. The urgency of the sharing is not even for an ad for President Trump as claimed, it is a disinformation meme. 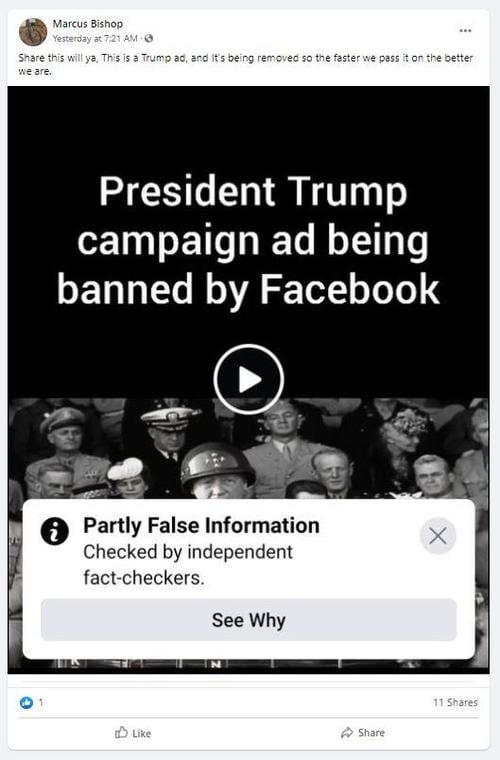 Facebook has a policy that if someone wants to run political or social issue ads on Facebook, they must be authorized. This article (here) in Facebook's business help center explains the regulations. This ensures that anonymous entities (for example, a foreign country intent on meddling with an election) does not run ads using Facebook's targeting. In order to run a political ad campaign on Facebook, the advertiser needs to verify who they are, the ads must carry a disclaimer (paid for by) and the ads will be catalogued in Facebook's ad library.

The Federal Election Commission has rules for political advertising as well, these are clearly spelled out in the advertising and disclaimers section of the FEC website.

The actors crafting the disinformation around this rather innocuous patriotic video are relying on people believing the claims of censorship and sharing out of defiance. It's understandable that people might be confused when it comes to the traces of the accounts of @StormIsUponUs, also known as Joe M. This QAnon influencer has been active since at least 2018. Recently their Twitter, Instagram and Youtube accounts have all been suspended. Posting from Gab (here)(archived here) Joe M reacts to a fact-check that was applied to an Instagram post by his wife:

This is a new low, even for#Facebook/#Instagram. They actually put a FACT CHECK on my video which contains nothing but an excerpt of Trump's sensational and inspiring SOTU speech. They literally CENSORED the president's own speech where he simply lists America's historical achievements. Is this about community standards, or the ELECTION! https://youtu.be/50IA9dsekFs
#tyranny

If Joe read the fact check, he would know it was targeting a false claim that had been added into his video. He is correct to say that this Instagram post does not contain anything but the president's own speech. Unfortunately, the automated tool which did this flagging did not differentiate between his original video and the edited one. The YouTube link Joe M. offered is now broken because that YouTube channel was suspended, as was the Instagram account of @mrsjoem. 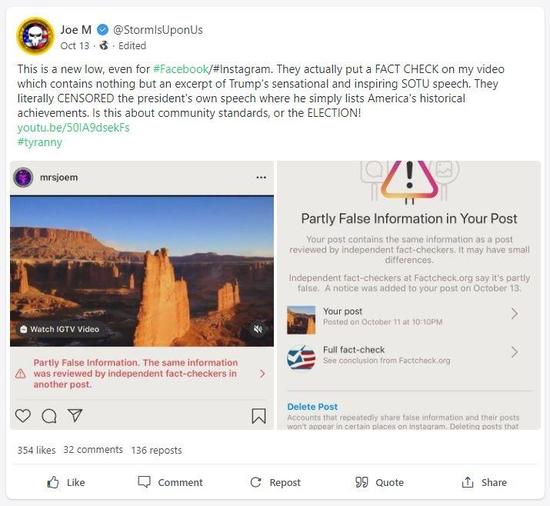 The foundation soundtrack of the @StormIsUponUs "Best is Yet to Come- #Trump 2020" video is the "America is the Land of Heroes" speech delivered by President Trump during the February 4, 2020, State of the Union. An additional music score was added and various stock and file footage is used to illustrate the things mentioned by President Trump in the speech.

Here is a video of that speech: