Did hackers break into Oregon's online election system and change votes -- including that of Portland Mayor Ted Wheeler? No, that's not true: An Oregon election official said safeguards in place make that impossible, such as comparing signatures on ballots with those on file. Besides, the official said, votes cannot be changed once they are received and logged in by the Oregon election division.

The Hacker Porch Ham has found an alarming flaw in the Oregon online voting system. Change anyone's voter registration online with just their name and DOB! Print it out and sign it with any sequence of letters, and without signature verification, the fake vote will either cancel out itself and your real vote, or if you did not vote, it will be used as your vote.

No, despite what hackers claimed, they did not change Democratic Portland Mayor Ted Wheeler's vote, an Oregon election official assured Lead Stories. Nor anyone else's vote.

A video posted on YouTube October 18, 2020, claimed that the hacking group 4chan had discovered a way to break into the state's election system online and change a person's vote. 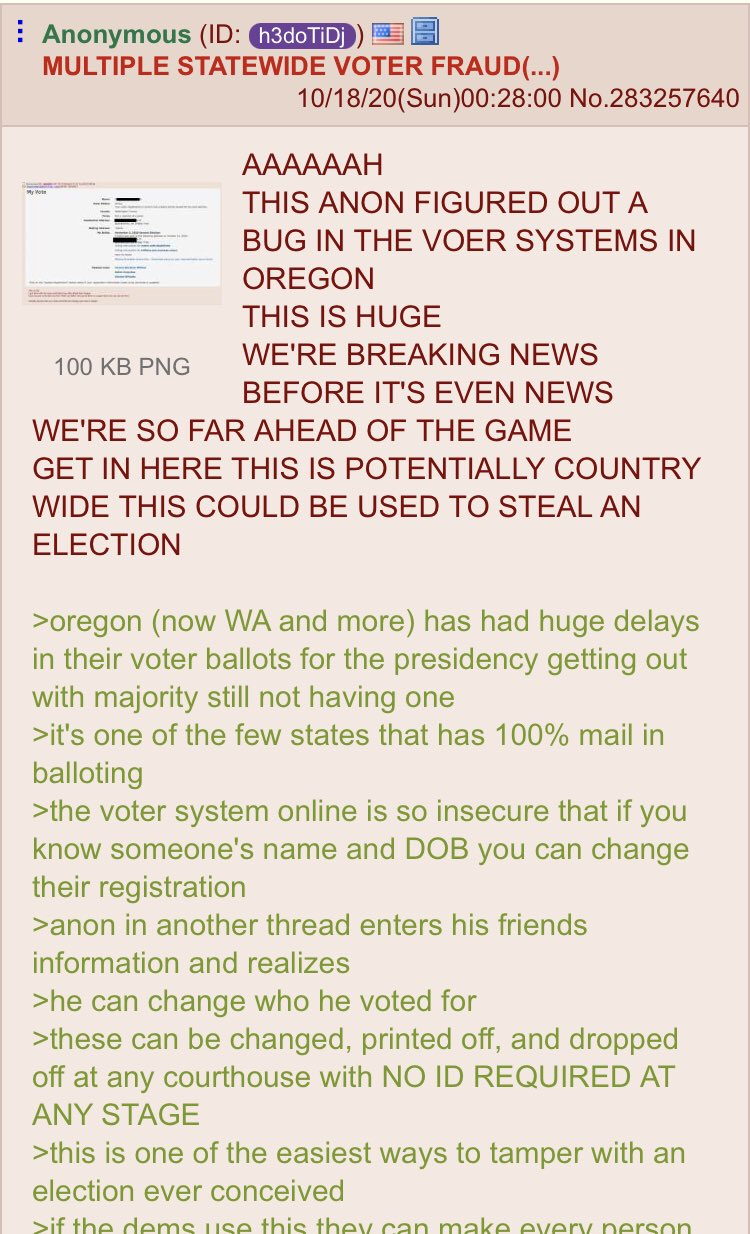 Thread: 4chan figured out a flaw in the Oregon voter system that allows you to change anyone's vote pic.twitter.com/5g83gDHzRI

There's no way they could have done that, Andrea Chiapella, communications director for the Oregon secretary of state's office, said in a telephone interview with Lead Stories on September 19, 2020:

It's false. We are calling it misinformation because it is inaccurate.

Once a person has voted, Chiapella said, that ballot cannot be changed. And the signature on any ballot is compared with the signature on file with the elections office. If they don't match, the ballot in question is discounted, she said in a October 19, 2020, email to Lead Stories:

No votes can be cast or cancelled online through MyVote.

While you can view a voter's information if you know their name and birthdate (it is all public information that anyone can view at an elections office), you cannot change it online without having the driver's license number.

Oregon does not have traditional voting machines. Instead, registered residents vote by mail, which election officials tout as the reason Oregon "ranks as a national leader in voter turnout." The state's election site explains the process:

Registered voters receive a ballot two to three weeks before an election, giving time to research issues or candidates.

Ballots must be received by 8 p.m. on Election Day.

The mark my ballot tool helps voters with disabilities and military and overseas voters to mark their ballot. They still must return the ballot with the proper identifying information, including their signature, which will be compared against the voter's signature in the voter registration file before being accepted to count.

The Nationalist Review, which says it "provides right wing commentary for nationalist and patriotic Americans," explains why the 4chan claim is false:

... the only required information to pass through the first security check was an individual's full name and date of birth.

This easily obtainable and often public information allows the user to then view the registered address of the voter, see when they had a ballot mailed to them. For those legitimate voters who are accessing their own information, the portal provides an additional option: to mark a ballot.

And that's where the confusion arose. Selecting "mark ballot" from the menu brings up a page with a ballot that the user can click to fill in their choices. However, this ballot is only available to those who have already filed for an absentee ballot and were qualified to receive one.

Those who are qualified must fill out a form that includes information that verifies them as a resident eligible to vote, including a state issued ID number or a social security number.

These qualified individuals include those in the military, overseas residents, and certain people living with disabilities who might have trouble filling out a regular ballot. Marking a ballot isn't the same as voting, however, it's merely filling out a ballot that an individual then has to print.

A form must then be completed and mailed with the ballot to the appropriate county auditor. The signature on the form will be checked with the signature the voter gave when they registered to vote.

In order to finalize those changes, the party attempting to exploit the election portal would have to pick an individual who was approved for absentee voting (Wheeler does not qualify), have his license ID or social security number, and forge a signature matching his registration.

Oregon election spokeswoman Chiapella noted in her email to Lead Stories the stiff cost for anyone caught trying to change ballots.

Altering someone's voter registration or attempting to vote another person's ballot are both crimes. It is a felony punishable with up to 5 years in prison and a $125,000 fine.

Attempts to alter information on MyVote can be tracked through our system logs to help identify the individual who is committing the crime.

She told Lead Stories she has been busy trying to put the false allegations to rest:

I hope everybody is assured that their vote is being counted in the way its supposed to be. ... Our elections are secure.