Did "The Simpsons" TV show air a scene several years ago that showed Donald Trump in a coffin? No, that's not true: This image is not a real still taken from "The Simpsons" TV show. Although the artwork is in the style of the show, it is not a still from an animated scene, nor does this event happen in the storyline of any episode of the series. This hoax plays off urban legends, that "The Simpsons" show, which has run for over 30 years, has scenes that predict events that eventually happen.

The claim reappeared as a post (archived here) published by the Facebook page "Mexican Problems" on October 2, 2020. The caption in the screenshot image reads:

Donald Trump just tested positive for Corona Virus.
This is a Simpsons episode from several years ago...
#TrumpHasCovid #OctoberSurprise #Trump

This fake "Simpsons" scene of Donald Trump in a coffin first appeared early in 2017 without any reference to the episode name or year that it allegedly aired. Back in 2017 it was determined that the faked "Simpsons" style artwork originated from a 4Chan post and had then spread in Spanish-language media. There was a YouTube video published on February 3, 2017, by the YouTube channel Badabun which explained the scene originated from 4Chan. The Badabun video promoted some technical errors as well, notably including the scene of Donald Trump on the escalator as an example of a prediction. That artwork was produced after the real-word escalator ride took place on June 16, 2015, on the day Donald Trump announced that he would be running for president.

"The Simpsons" has its own Wiki with over 39,000 articles. The Donald Trump Page at Wikisimpsons has a listing of all the episodes in which Donald Trump has appeared or been mentioned. There is no reference to Donald Trump's death or a coffin in these episodes. There is, in episode #408, "Funeral for a Fiend" a funeral scene for Sideshow Bob that likely served as a model for the hoax image. The styling of the casket, the shape of the roses and even the church windows point to the reference used for the forged cartoon. The real image of Sideshow Bob's funeral has been turned to match the orientation of the other image.

Snopes wrote about the hoax on February 7, 2017, in an article titled, "Did 'The Simpsons' Predict President Trump's Death?"

Buzzfeed addressed the hoax on February 8, 2017 in an article titled, "A Fake Viral Image Claims "The Simpsons" Predicted Trump's Death In Office"

The hoax Simpsons funeral scene has not been asleep since 2017. Although this meme seems to have been made because of the recent announcement that President Trump and the First Lady had tested positive for Covid 19, the hoax had already been revived for a different ominous prediction which did not happen. Earlier this summer, back in July, the date August 27 was a trend on TikTok. Perhaps the most famous video was made by a user named stfusamantha whose spooky video told people to remember August 27th, that it's important.

If you've seen everyone on TikTok referencing August 27th and are wondering what's happening on August 27th? What is this? Let me quickly explain. It all started 5 days ago when this girl stfusamantha posted this vid pic.twitter.com/GuoVskAM3g

There is no indication for how stfusamantha's video became associated with the fake Simpson's prediction from 2017, but again- the rumors circulated first on Spanish-language media, like this article on planoinformativo.com titled, "Los Simpson 'predicen'muerte de Trump un 27 de agosto" (The Simpsons' predict Trump's death on August 27) Below are examples of other articles from August 27 and 28, which were returned with a Google image search of the fake coffin picture. 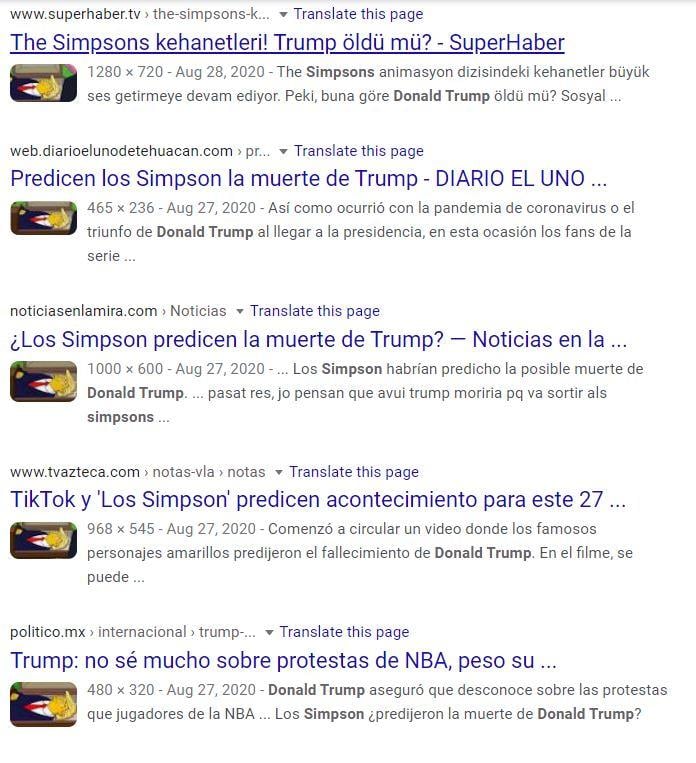 The Simpsons gets too much credit for predicting the future, Oakley argues, even when it is funny -- like Disney buying 20th Century Fox and smartwatches -- but especially when the so-called claim is used for harmful purposes.

"There are very few cases where The Simpsons predicted something," Oakley says. "It's mainly just coincidence because the episodes are so old that history repeats itself. Most of these episodes are based on things that happened in the '60s, '70s or '80s that we knew about."