Did someone photograph a stack of boxes labeled 'Boneless Pork Rectums' which also bore a sticker that appears to be the McDonald's logo? No, that's not true: This photo of boxes, without the McDonald's logo, appears to be a real photo that dates back to at least 2007. The photo already had quite a long viral run before the crudely photoshopped McDonald's sticker was added into the mix.

The photo reappeared in a post (archived here) where it was published on Facebook on November 26, 2020 without any caption. 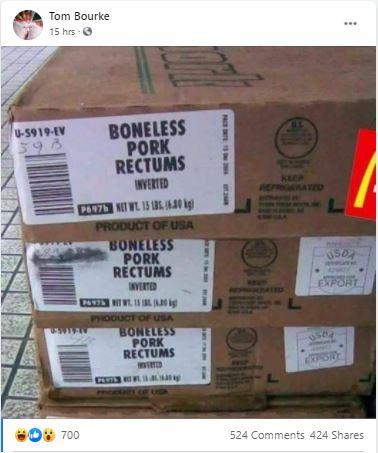 This viral photo has been circulating for years. A 2014 Snopes article, "Are These Boxes of 'Boneless Pork Rectums'?" identifies, as best they know, the origin of the viral photo as an English language Taiwanese forum board. The 2007 post was captioned, "Taken last week outside a local dumpling shop." The link to the post at tw.forumosa.com is no longer operational.

The stickers on the boxes seem to confirm that timeframe. The packing date is marked December of 2006. The boxes have USDA export stickers and are printed with "PRODUCT OF USA". Pork Rectums are not an unusual product from the processing of a hog. They are used as both casings and as an ingredient in prepared dishes in many countries. There is an international trade in this product.

The Reverse Image Search Engine, TinEye, allows search results to be sorted by the date they were found by TinEye's crawler. The earliest return of the original photo without the Photoshopped McDonald's logo is from April 16, 2008. Note: This does not mean an earlier result did not exist, simply that the TinEye crawler had not encountered it yet.

TinEye's first instance of the photoshopped McDonald's logo version was uploaded to Imgur (here) on January 2, 2016 with the caption, "Enjoy your McRib." This would have been just a few days after John Clayton posted a Photoshopped version of the photo to Facebook on December 28, 2015. Snopes updated their original article from July 2014 to include that December 2015 post with the McDonald's twist. Clayton's caption focused on the McRib Sandwich:

And people can't wait to sink their teeth into'em.
McDonald's you Nasty Basterds !
So when you order the McRIB, you're actually ordering PIG ASS ! AKA The McASS Sandwich. Smhl.

This video from November 2014 shows a tour through a Lopez Foods plant which makes and freezes the specially shaped McDonald's McRib patties. There is no mention of boneless pork rectums. According to Kevin Nanke, Vice President of Lopez Foods Incorporated, McDonald's USA Pork supplier, The McRib patty ingredients are, Pork picnic shoulder, water, salt, dextrose and preservatives.