Did an Antifa leader in the 'Pittsburg area' tweet a warning to President Trump that armed Antifa members would block roads in conservative areas unless he conceded to Joe Biden? No, that's not true: A prankster, infamous for trolling the far right on social media, posted the tweet. Adam Rahuba is not an Antifa leader. He has admitted to past hoaxes aimed at gaining social media fame for several years, according to the Washington Post. Rahuba's latest prank resulted in suspension of his Twitter account and it angered many on the right who believed it was real. It also apparently fooled some journalists.

The claim appeared in an article published by 100percentfedup.com on November 24, 2020 titled "Pittsburg Area Antifa Leader Tweets Warning To Trump: "We are armed...If you do not concede by Sunday at noon, we will begin to block roads in conservative areas"" (archived here) which opened:

During the September 29 presidential debate, Democratic Party presidential candidate Joe Biden responded to President Trump's remarks about Antifa being a violent organization by telling him that Antifa is simply "an idea" and "not an organization." Conservative Robby Starbuck immediately jumped into action, creating a video to show Joe Biden and his handful of supporters that Antifa is hardly an "idea," but instead, a well-organized, violent domestic terror group. #WalkAway founder Brandon Straka, one of America's bravest patriots, shared a screenshot this morning from an "Antifa [idea] leader" Adam Rahuba, of Pittsburg, PA, warning President Trump and his supporters that if he doesn't concede and turn the keys over to the far-left, radical regime of puppet Joe Biden, there will be blood in the streets of the suburbs in America.

Pittsburg Area Antifa Leader Tweets Warning To Trump: "We are armed...If you do not concede by Sunday at noon, we will begin to block roads in conservative areas"

During the September 29 presidential debate, Democratic Party presidential candidate Joe Biden responded to President Trump's remarks about Antifa being a violent organization by telling him that Antifa is simply an idea and not a violent organization. Conservative Robby Starbuck immediately jumped into action, creating a video to show Joe Biden and his handful of [...]

This is the tweet by Brandon Straka that was included in the article:

Antifa is just "an idea"- @JoeBiden

It's time for us to end this idea. pic.twitter.com/jUqVMdJTt4

If you do not concede by Sunday at noon, we will begin to block roads in conservative areas. Your supporters will not be able to go to work or the grocery store to feed their families.

We are armed & will retaliate to attempts at vehicular manslaughter. 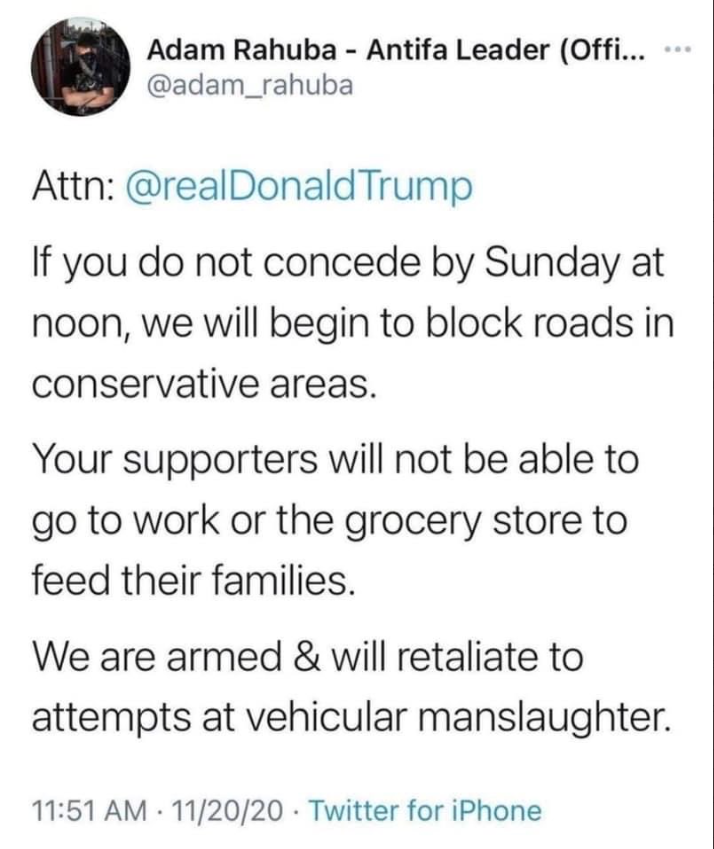 The article misspells the name of Pennsylvania's Pittsburgh as Pittsburg. Don't bother emailing Lead Stories about that, since we are fact checkers, not spell checkers.

Rahuba's personal "disinformation & propaganda" website includes this explanation from Rahuba about why he carries out such hoaxes:

I consider these stunts acts of political activism and performance art - a weaponization of my own trauma and mental illness for the greater good of humanity. My willingness to plant disinformation and exploit conservative bias and fear have earned me uncomfortable comparisons to Roger Stone and Jack Posobiec. I've made mistakes. I'll make many more. I've pissed off liberals, friends, and families and have an exhaustive collection of death threats. I'll stop when conservatism is an embarrassing stain on our Democracy - like slavery, The Confederacy, treatment of indigenous people, treatment of women, treatment of the LGBTQ+ community, treatment of people of color by police, banks, landlords, and corporations.

A Washington Post article about Rahuba on July 17, 2020, described him as a "Bernie Sanders supporter" who "has provoked the far right for years using online aliases, sometimes with dangerous results."

Adam Rahuba, a former concert promoter, works part-time as a food-delivery driver and a DJ. At 38, he spent most of the past year staying on a friend's couch in a small town north of Pittsburgh.

A Washington Post investigation found that Rahuba is also the anonymous figure behind a number of social media hoaxes -- the most recent played out in Gettysburg on Independence Day -- that have riled far-right extremists in recent years and repeatedly duped partisan media outlets.

NewsGuard, a company that uses trained journalist to rank the reliability of websites, describes 100percentfedup.com as:

A conservative news and commentary site that has misstated facts and mixes news and opinion.