Did Twitter disable sharing of a tweet from the Philadelphia GOP about "poll watchers"? No, that's not true: There is no warning tag on the code, nor has its visibility been altered. The "<blockquote" mass of code the Twitter user found and shared as evidence is the standard code by which any Tweet can be embedded in a blog post such as the one you are reading at this moment.

The claim originated in a tweet (archived here) where it was published by @PhillyGOP on November 3, 2020. The caption read:

As you can see, the tweet has not been labeled by Twitter in any way, nor has its sharing abilities been removed:

The embed code for this tweet is as follows:

The beginning of the embed code matches what @mctwinsmom tweeted as evidence of Twitter restricting sharing: 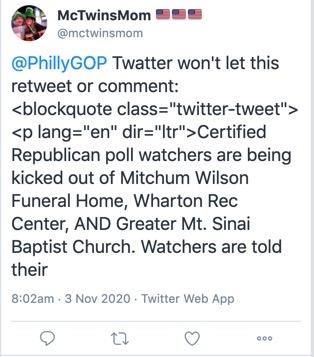 The Supreme Court decision on voting in Pennsylvania is a VERY dangerous one. It will allow rampant and unchecked cheating and will undermine our entire systems of laws. It will also induce violence in the streets. Something must be done!