Does a video show the shredding of paper ballots in Cobb County, Georgia, a day after a recount confirmed that Joe Biden won a 14-percent margin over Donald Trump? No, that's not true: A video posted on social media by a woman on November 20, 2020, showed routine shredding of documents, not ballots nor anything "relevant to the election or the re-tally," the Cobb County elections director said. The video, recorded from a distance, did not reveal what was inside containers wheeled from a county building to a document shredder truck.

The claim originated in a social media post by a woman who identified herself as Susan Knox and it was included in a tweet (archived here) posted by Atlanta lawyer L. Lin Wood on November 20, 2020, under the title "Looks to me like they may be destroying election documents in Cobb County, GA." The woman holding the camera described what she claimed she was seeing as a worker rolled plastic containers from a door to the mobile shredding truck. She said:

Susan Knox, November the 20th, Friday morning. I'm watching all of these ballots being shredded now. Unbelievable. Let's move up and let's see what else is going out. Yep, here we go. What are they shredding? Massive amounts of ballots, right there, going out.

In case the tweet is deleted, here is a screenshot: 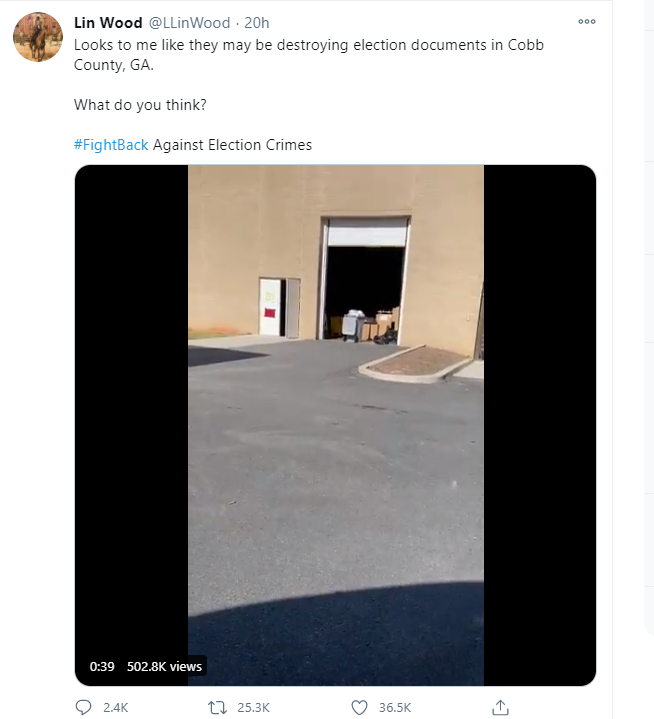 This is a zoomed-in shot of the shredding truck and the worker wheeling a plastic container back to the building. The video never gave a closer view of the paper being shredded, which means it cannot support the claim that ballots were being destroyed. 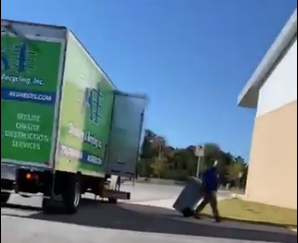 Lead Stories contacted A1 Shredding to ask what was being shredded, but we have not yet received a response at the time of writing. We will update this article when we get it.

The building is Cobb County's Jim Miller Event Center at 2440 Callaway Road, Marietta, Georgia. It is where Cobb County conducted the re-count of votes from the November 3, 2020, election.

The Cobb County elections department released an online statement titled Document Shredding at the Jim R. Miller Park in response to the social media uproar created by the sharing of the video:

There has been significant social media chatter about some document shredding at the Jim R. Miller Park Event Center in Marietta, Georgia where our Elections Department had previously conducted the state-ordered re-tally of votes in the November 3rd election.

The shredding company routinely responds to the Elections Department following an election to help dispose of non-relevant materials that cannot be easily disposed of. The company did work at the Jim R. Miller Event Center early on Friday, November 20th, and helped dispose of the following items:

"None of these items are relevant to the election or the re-tally," said Elections Director Janine Eveler. "Everything of consequence, including the ballots, absentee ballot applications with signatures, and anything else used in the count or re-tally remains on file. After an out-of-context video was shared on social media we contacted state officials to reassure them this was a routine clean-up operation and they could come to inspect our stored materials if they wished."

A1 Shredding also released a statement saying it has no idea what kind of documents were inside the containers it picked up for shredding:

Given the confidential nature of the documents that are provided, we do not inspect nor do we have any knowledge of the contents of the materials that we are asked to pick up and shred for our customers.

Lead Stories reached out to Wood, an attorney who has sued to invalidate the Georgia vote, and we will update this article with his response when it is received.

We have been unable to find contact information for Knox in order to request a response.